What About The Human Race?

You can't go an hour within the current news cycle without hearing about racism, inequality and racial injustice.

The loudest voices about racism seem to come from states like California, Washington and Oregon where we have seen protests and riots for several months.

The fact is that California actually has enshrined in its state constitution this passage that was adopted in 1996 which was referred to as the "California Civil Rights Initiative" when it was approved by the voters in the state.

“The state shall not discriminate against, or grant preferential treatment to, any individual or group on the basis of race, sex, color, ethnicity, or national origin, in the operation of public employment, public education, and public contracting.”

It was modeled after the 1965 Civil Rights Act and was intended to promote a race-neutral society in California where all people were treated fairly and equally.

In my last post I wrote about the emerging trend that seeks to eliminate all standardized testing based on the argument that they are somehow discriminatory. Never mind the fact that standardized tests were originally adopted to level the playing field and eliminate subjective bias in college admissions, job placements and professional certifications.

I was interested to find out that there is actually a ballot initiative in California this November to repeal the "California Civil Rights Initiative" language in the state constitution. The initiative is Proposition 16.

In effect, those who have put this on the ballot do not want equal rights. They don't want merit-based decisions on who gets a job or who gets into college. They actually want to have a society that allows discrimination and preferential treatments based on race, color, sex or ethnicity.

If you read the mainstream media you might be led to believe that such a provision would be sponsored by a a bunch of far right-wing conservatives who support Donald Trump.

This ballot initiative to amend the California Constitution was actually sponsored by leading Democrats in the state and is endorsed by Democrat Governor Gavin Newsom.

This is clearly an attempt to legalize preferential race-based discrimination and affirmative action that is the antithesis of equal justice and rights under the law.

Martin Luther King, Jr. famously stated that he had a dream that his children would one day live in a nation where they would not be judged by the color of their skin but the content of their character.

Dr. King spoke about that over 50 years ago. Think about all the energy and effort that has been put into turning that dream into a reality.
After over 50 years is this the legacy of Dr. King?
Those who claim to be "civil right activists" are giving up on merit, character and hard work being those things we judge people on?
"We just want our share based on our race whether we have earned it or not. We also don't care if our share comes out of others who have worked hard and demonstrated their own merit."
Is this the measure of character that Dr. King had in mind over 50 years ago? They truly want color, ethnicity or sex to be the most important measure? Isn't that where we were over 100 years ago?
Affirmative actions programs were first initiated in the early 1960's but they did not gain my attention until the the late 1970's when a young white man in his early 30's named Allan Bakke was denied admission to medical school at UC-Davis despite the fact that he had a better academic record and test scores than almost all of the minority applicants that had been admitted under an affirmative action program.
Bakke brought a legal action against the university and his case was ultimately decided by the U.S. Supreme Court in 1978 which ruled that the minority quota admissions program should be struck down and Bakke admitted. However, the Court did not go so far as to rule that race could not be considered among other factors in admission decisions.
The U.S. Supreme Court has revisited the issue of affirmative action several times over the last 40 years but has generally continued the basic principle in the Bakke decision that outright quota programs are illegal but that race may be considered among a number of factors in order to fulfill a goal concerning the "educational benefits of diversity" in admission decisions.
In the 2003 Supreme Court decision of Grutter v. Bollinger the court allowed the University of Michigan's affirmative action program to continue but the majority specifically stated that such programs should not be considered permanent.

That was written 17 years ago.
Does that mean that affirmative action programs of any type only have 8 years of life left in them?
Even without considering the limited use of affirmative action that is allowed now, how does California believe that it can allow outright quota programs based on race in that the U.S. Supreme Court has already ruled that these are illegal?
Has the lack of race-based affirmative action kept minority students from attending state universities in California?
Californians for Equal Rights (which is the organization opposing Prop 16) states that there are 3 times as many Blacks and Hispanics admitted to state universities today as there were in 1994.
There has also been a 78% increase in underrepresented minorities graduating from the state university system over that period.
California's Board of Regents also recently dropped standardized testing in its admission decisions claiming that such testing was racist. However, a recent study showed that standardized tests actually resulted in more minorities gaining admission than they would have otherwise.

The regents of the University of California spoke as one when they unanimously scrapped the Scholastic Aptitude Test in a virtual meeting last month. “I believe the test is a racist test,” said one regent, Jonathan Sures. “There’s no two ways about it.”
But the regents’ decision flouted a unanimous faculty-senate vote a few weeks earlier to retain the SAT for now, after a yearlong study by a task force found the test neither “racist” nor discriminatory and not an obstacle to minorities in any way.
The 228-page report, loaded with hundreds of displays of data from the UC’s various admissions departments, found that the SAT and a commonly used alternative test, ACT (also eliminated), helped increase black, Hispanic and Native-American enrollment at the system’s 10 campuses.
“To sum up,” the task force report determined, “the SAT allows many disadvantaged students to gain guaranteed admission to UC.”
So how could the liberal governing board of a major university system reject the imprimatur of its own liberal faculty researchers and kill a diversity accelerator in the name of the very diversity desired?

The answer: The urgency of political momentum against the tests proved irresistible and swept away the research and data.

All of this seems designed to to make the most important factor in admissions decisions to be whatever the liberals want it to be.
We are often told that affirmative action programs are intended to just provide a little boost to allow minorities to gain a small advantage.
How true is that statement?
Althea Nagai, Ph.D., for the Center for Equal Opportunity recently completed a study on how far affirmative action went before California voters put the Civil Rights Initiative in the state constitution and the U.S. Supreme Court questioned the race-based preferences at the University of Michigan in the Grutter case.
Blacks were being admitted into Cal-Berkeley with median SAT scores of 960. It was 1040 for Hispanics.
Whites had to score 1290 and Asians 1300 to gain admission.
A small boost? 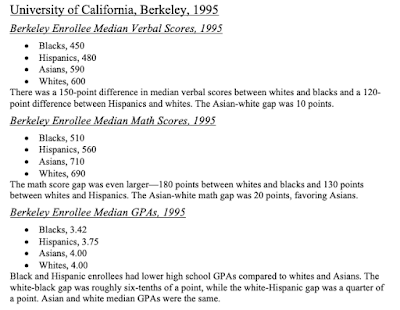 The median SAT scores at the University of Michigan showed similar results in 2005.

When you look at how this translates to the odds you will be admitted, you can see how disproportionate and disparate the inequality is.

Controlling for other factors, odds ratios showed Michigan awarding a great deal of preference to black over white applicants (more than 70 to 1) and to Hispanics over whites (roughly 46 to 1). Michigan also gave whites a small preference over Asians.

To provide some context, in-state students in Michigan receive about a 1.05x odds advantage to be admitted to UM over out-of-state students controlling for other factors.
70x and 46x better chances for minorities compared to .05x for in-state vs. out-of-state students?
It does not get much discriminatory and disparate than that.
All in the name of diversity?
If the NFL determined who made their rosters with similar thinking they would no longer consider 40-yard dash times or how much an athlete could bench press. They would also allocate a set number of roster positions to those that played in the Ivy, Patriot and Mountain West conferences and cut back those who played at Alabama, Ohio State or USC.
Of course, there remains the question as to whether putting individuals in positions where they are in over their heads is really in their best interest.
Well-regarded African American economist Dr. Thomas Sowell argues that affirmative action programs aimed at promoting diversity actually do more harm than good for minorities. After all, it easy to see that putting someone in an NFL game that is ill-equipped could hurt them. It is harder to see that in college or high school admission decisions.

Minority students admitted to institutions whose academic standards they do not meet are all too often needlessly turned into failures, even when they have the prerequisites for success in some other institution whose normal standards they do meet.
When black students who scored at the 90th percentile in math were admitted to M.I.T., where the other students scored at the 99th percentile, a significant number of black students failed to graduate there, even though they could have graduated with honors at most other academic institutions.
We do not have so many students with that kind of ability that we can afford to sacrifice them on the altar to political correctness.
Such negative consequences of mismatching minority students with institutions, for the sake of racial body count, have been documented in a number of studies, most notably "Mismatch," a book by Richard Sander and Stuart Taylor, Jr., whose sub-title is: "How Affirmative Action Hurts Students It's Intended to Help, and Why Universities Won't Admit It."

There was a time when people of color did not get a job, get into college or get into a game because of their color.
That was wrong
However, it does not follow if someone does not get into college, get into college or is placed under arrest today it is because of their color.
Everything and everyone is not racist.
Our problems are not going to be solved by turning back the clock 50 years as California wants to do.
Let's quit defining people by race, color and ethnicity.
Let's also stop infringing on other's rights to get what we think are our rights.
All of this is making us forget that which we are all apart of and we all share together---being a part of the human race.
Posted by BeeLine at 10:38 PM