It's Not Over Until One Side Accepts Their Fate

Conflicts and wars do not end until one side accepts their fate.

Peace is not achieved until one side realizes the balance of power is such that it is futile to continue the conflict.

The costs of continuing the conflict are finally determined to be greater than the hope that any benefit is going to be gained.

There are times that both sides come to that conclusion, each accepts their fate, and an uneasy truce is the result.

However, true peace is generally only achieved when one side effectively admits that their cause is lost and ceases putting up a fight.

In politics, it manifests itself in a little different way. One side becomes effectively marginalized and has limited power when they are on the losing side of a big issue. This was the case with Democrats who opposed the abolition of slavery in the name of states' rights in the 1860's. As a result, Republicans took control of the levers of power in the U.S. Congress and the Democrats lost their central issue based on  the will of the American people.

You can see that in this chart that shows control of the Senate and House from 1855-1933. 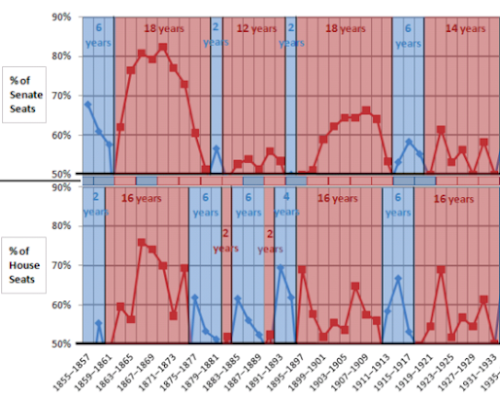 The same was true for Republicans as they argued against the expanded use of federal powers beginning with The New Deal. They lost the argument to the American people and were in a period of irrelevancy in Congress for over 60 years.

This is the same chart as above for the period from 1931-present. Democrats were solidly in control for almost all of the years between 1933 and 1996.

However, notice neither party has been able to attain a significant majority of seats in either the House of Senate so as to be considered dominant since 1996. We have been an era of political division that continues to manifest itself in the streets today. 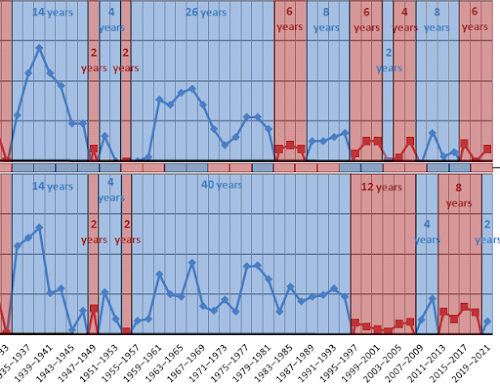 It should also not go unnoticed that both of these crisis periods in American history acted as a catalyst for one party to become dominant with the American voters. One party was judged to be with the mainstream of American voters. The other essentially became irrelevant.

All of this is worth considering as we examine the events going on in the United States right now.

The Biden campaign and Democrats would like for people to believe that if he is elected President that the rioting and upheaval in the streets will end. Biden suggests that he will bring a calming presence that will cause the mayhem to cease.

I don't see that occurring. The facts on the ground do not support that view.

Almost all of the rioting and violence we are seeing is in very liberal, Democrat-run cities.

The mayors in many of these cities have been attacked by the mobs. The mobs have shouted them down, surrounded their personal homes and vandalized their property.

These are politicians who are supposedly "on their side".

I see a Biden and Democrat victory in November making things worse. I see it emboldening these radicals such that they believe their radical views have been vindicated and that the American people support what they are doing.

These radicals are going to believe that a Biden/Democrat win means that they are owed something because they will argue that the win would not have been possible without them.

If Biden and the Democrats try to reign them in I see it backfiring as the radicals simply will not accept that they should not have a significant seat at the table. If you doubt this look again at what is happening in these ultra-liberal cities.

These radicals will see no reason to stand down. After all, in their minds they "won".  They will be a long way from accepting their fate which would result in peace for the rest of us.

As I see it, the only way that we get on a path to ending the conflict is for a decisive Trump and Republican win in November.

This is going to be required for practical thinking Democrats to realize that they have to distance themselves from these radical leftists who want to reform and remake what they see as a deeply evil and flawed country.

This is also going to be required in order for President Trump, the governors in blue states and others to take the necessary and decisive actions to put an end to these insurrections and prosecute those who led and funded them.

Many are wondering why we are not seeing see Biden, the Democrat governors and mayors come out and criticize the rioting and violence being perpetrated by radical Antifa and Black Lives Matter activists?

Democrats refuse to do so simply because they know that if they do it they risk losing a small (<20%) but critical portion of their base of support.

This puts Democrats in a very tough position. They cannot afford to lose the support of the radical left in their party. However, they also cannot afford to lose any more traditional working class voters. They also have to appease the radicals while trying to convince suburban women that they are really not going to defund the police and allow Antifa and BLM radicals to start storming and threatening suburban neighborhoods.

For example, look at this scene in Rochester, NY where BLM radicals invaded a restaurant, terrorized diners and turned over tables while telling people, "if you don't give us our sh**" over the weekend.

And nary a word from any Democrat condemning this violence.

All of this will put the country in an even tougher position should the Democrats win in November.

If you look again at the charts above the country has shifted more Republican than Democrat over the last 25 years. The 2008 election of Obama and the Democrats gaining control of the House and Senate was an anomaly due to the 2008 financial crisis.  That move to the Democrats was quickly reversed when they tried to govern with a much more liberal platform than they ran on.

This resulted in the enormous gains that the GOP made in subsequent elections and ultimately led to Donald Trump winning the Presidency.

I don't see Trump Republicans going quietly into the night if Biden is elected. The commitment and enthusiasm of this group is too large right now. They will not be willing to surrender the country to the radical Left.

The voters in the country still lean center right. This Gallup survey shows that the number of voters who describe themselves as conservative or moderate outnumber self-described liberals by two to one.

You can also see in this chart from the Pew Research Center that Democrats have gotten much more liberal over the last 20 years. However, those who describe themselves as very liberal are still only 15% of all Democrat voters. Interestingly, this is double what it was in 2008 when Barack Obama was elected.

In the meantime. Democrats who consider themselves conservative or moderate have fled the party. 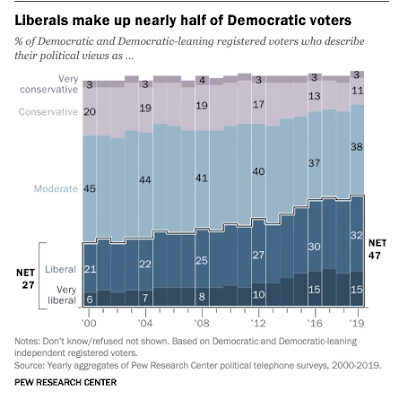 Is is just a coincidence that the Democrats success at the ballot box has declined as the influence of liberalism has increased in the Democrat party?

You have to also ask yourself if 85% of the county is going to stand by while 15% tries to destroy it?

I believe the only way out out of the mess we are in right now is to send a loud and convincing message to Democrats that they are on the wrong path.

That will only occur with a convincing defeat where they will need to look deeply at what they have brought upon themselves and the country.

How do you have a country with people brazenly breaking the law? Rioting? Calls to defund the police and empty prisons? Open borders, sanctuary cities and no attempt to enforce existing immigration law?

However, what value do you put on your life, your property, your livelihood and the legacy of this country that you might like to confer on your children and grandchildren for the future?

Democrats need to get back in concert with mainstream America. We can have healthy differences of opinion on policy priorities and solutions and the role government should have in solving problems.

We cannot have lawlessness.

If the people of the United States fail to hold these people to account, it is the fate of the nation that may be at stake.