Two news items are getting a lot of attention right now from the media.

The Senate has released its proposed bill to repeal and replace Obamacare.

One of the key provisions in the bill is a proposal to scale back the expansion of Medicaid in Obamacare. An additional 14 million Americans have been added to the Medicaid rolls since 2014. The CBO projects that another 15 million may become eligible over the next 10 years.  Of course, this cost is paid by the taxpayers who have to pay their own healthcare bills.

In addition, President Trump stated in a speech in Iowa on Wednesday night that “those seeking admission into our country must be able to support themselves financially and should not use welfare for a period of at least five years.”

Political pundits were quick to point out that there is already a law that essentially prohibits this and derided Trump. However, I would point out that there are also laws already on the books that prohibit immigrants from entering the United States illegally and we know how that has worked out.

It will be interesting to see what changes Trump is considering in the legislation.

Speaking of Medicaid and welfare benefits, I thought it was a good time to revisit a blog post in 2012 entitled "Why Work?" in this Friday Favorites segment.

It is often forgotten that Medicaid, housing assistance, food stamps and other welfare benefits are provided tax-free to the recipients. This makes the value of these benefits extraordinarily high compared to working wages. As a result, receiving these benefits can be a substantial deterrent for someone who might otherwise consider working.

We often hear that Americans just won't do a lot of the jobs that need to be done in this country. Why is that? A large part has to do with the substantial social safety net. For many, it just does not pay to work.

I do not blame the welfare recipient. Human are inherently creatures of self-interest. We will take the path that provides us the greatest benefit. It is the system that is at fault. We should not be perpetuating a system that devalues work.

Read all about "the welfare cliff". In addition, also consider the fact that many, many more people are receiving tax-free Medicaid health benefits today than when I originally wrote this blog post in 2012. There are even more reasons to not work today.

There is a lot of debate and discussion about the fiscal cliff in Washington right now.  However, we never hear anything about the welfare cliff.

What is the welfare cliff?

It is the point in which it makes more sense to sit at home and do nothing, and collect welfare benefits, than to work for wages.

Tyler Durden of Zero Hedge writes about the welfare cliff in "When Work Is Punished: The Tragedy Of America's Welfare State".  He cites a recent presentation by Gary Alexander, Secretary of Public Welfare, Commonwealth of Pennsylvania, in making his key points.

To illustrate the welfare cliff consider this fact about a single mother in Pennsylvania with two children.

In other words, earning more than $29,000 from work actually starts to reduce the single mom's household income. There is no incentive to earn more. It is more profitable to stay home and collect welfare.

The two charts below are from Alexander's presentation which is worth looking at to also see the massive growth in welfare and Medicaid over the years. 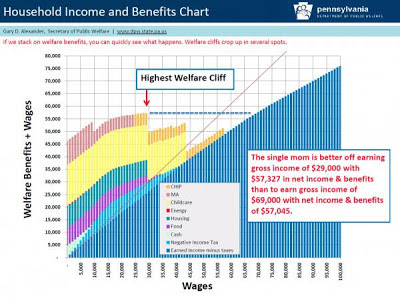 What is also sobering is what the welfare burden has become on working taxpayers.  For every one person receiving welfare assistance nationally, there are only 1.65 employed persons in the private sector.

For every one person who is either receiving welfare or works for the government, there are only 1.25 persons working in the private sector.  After all, taxes are needed from the private sector to support these payments whether as a welfare payment or a government paycheck.  Ouch! 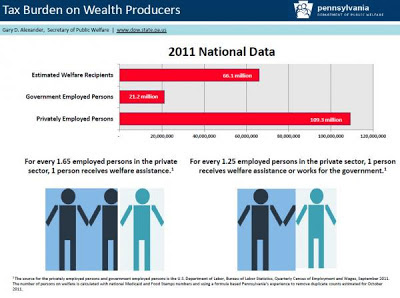 One big factor in why the welfare recipient makes out so well is the tax-free nature of welfare benefits and the refundable tax credits that are built into the Internal Revenue Code.  Tax loopholes are not just for the rich any more.

I am all for helping people who need a helping hand. However, this is clearly not a sustainable path. It also clearly shows that the incentives in the system are not properly aligned to get us the results we should be getting.

Our goal should be to get as many people in productive roles in our society as we can.  Our welfare programs are clearly not doing that.  We should also have policies that foster as much alignment between people in our country as possible.  The disconnect between the people working and paying the bills and those receiving government benefits will do nothing but create greater discord in society if we don't fix this.

If we get past the fiscal cliff I certainly hope that we will soon start looking at the welfare cliff.
Posted by BeeLine at 9:22 PM