Mary Meeker of Kleiner Perkins focuses her annual Trends report on the internet but she often highlights additional topics in her charts and graphs. She has extensive material on both China and India. I found the India data most interesting.

A few slides of interesting information about India and beyond from the Meeker report.

The first shows just how much data our internet world is producing and the increasing volume of information that is structured or tagged. 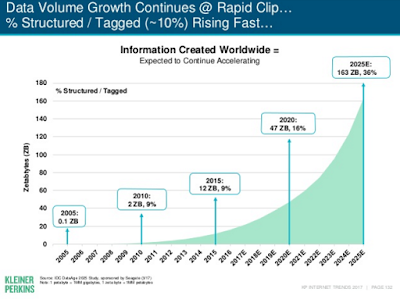 Meeker has a lot of information on India which now has over 355 million internet users. To give you better perspective on the mass of people in India that represents a mere 27% of the population. However, the 355 million on the internet is still more than the entire population of the United States.

A lot of the population of India is young. You better understand that when you consider that India has the largest K-12 school enrollment in the world---250 million students! That is 5 times more than in the United States. It is 40% more than school enrollment in China. (The one child policy really did have an effect). 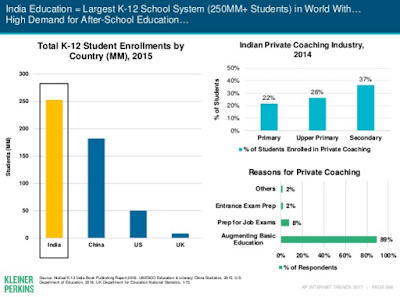 That means a lot of competition in the classroom for very few higher education opportunities. That probably explains why 37% of secondary students in India are supplementing their education with private after-school education coaching.

This also goes a long way to explaining the culture that is behind the success of students of Indian heritage being behind the winner of the last 10 U.S. Spelling Bee championships.

To put this in further context, there are more people in India under the age of 14 than the entire population of the United States of America. 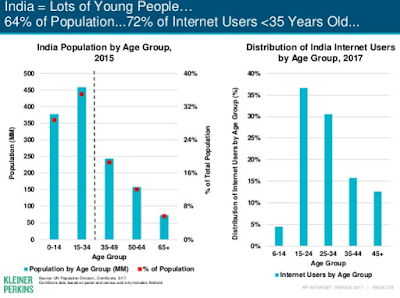 There is also a lot of talk in the United States these days about the best way to provide health insurance to the American people.

Health insurance is almost unknown in India. Fewer than 20% have coverage. For that reason 89% of all health care expenses are paid out-of-pocket by individuals. The comparable number in the United States today---21%.

What is even more interesting is that the amount of out-of-pocket spending on health care is higher in Communist China (70%+) than in the United States as well as in European countries that have socialized medicine like France (30%), Germany (57%) and the U.K. (58%).

The reality is that all of these countries have a stronger market-based and consumer health care model than does the United States. However, we constantly hear from liberals that the answer to our health care needs is to go to a single-payer socialized system? 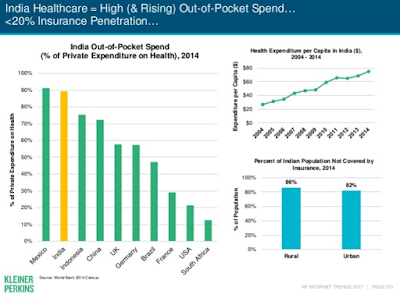 India's most significant challenge over the next 35 years will be to create an economy that can sustain the massive numbers of young people who will come of employment age in the coming years. India only has jobs today to support 55% of the working age population. As the working-age population increases there will be the need to create hundreds of millions of jobs.

India needs to creates 280 million jobs in the next 35 years to accommodate the surge in working age population. To put that in context, consider that the United States economy today only supports 124 million jobs in the private sector. Looked at another way, India needs to create twice as many jobs as the United States currently has over the next 35 years to fully employ their future working age population! 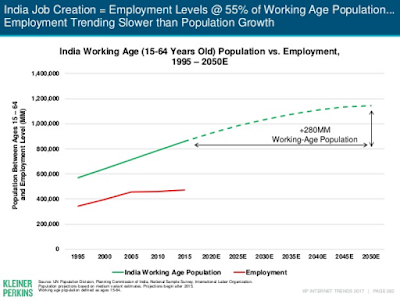 The challenge in the United States over next couple of decades will be to get control over its out of control entitlement spending.

Almost 2/3 of federal spending is currently devoted to entitlement spending. 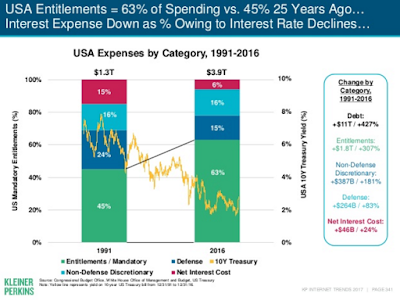 Entitlement spending has grown by $1.8 trillion since 1991. 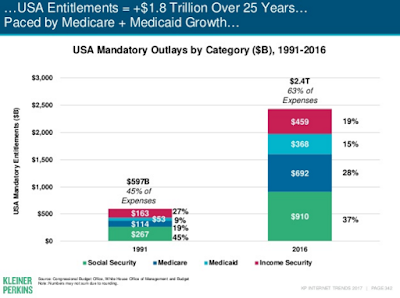 Total entitlement spending is equal to 32% of average annual household income. Therefore, to pay the nation's entitlement costs, the average family today is effectively spending 1/3 of their labor supporting someone else. It is a shocking total no matter how you look at it. 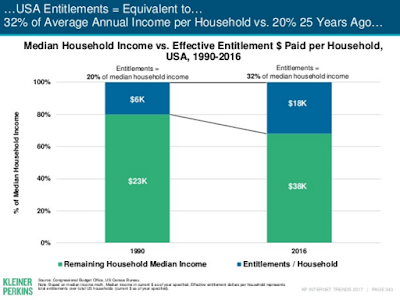 It is simply not sustainable.

Do we have the political will to do something about it? What will it take?

When will it happen? If it does not happen, what will the costs be for our children and grandchildren?

Will they all be working for someone from India or China?