Do you recognize any of these names?

Do you have a guess at what ties them all together?

These are not typical names you hear in the United States of America.

These are the names of the six finalists in the recently concluded 2017 Scripps National Spelling Bee.

They are all immigrants or children of immigrants.

English was likely not the native language of their parents. However, these are the six best spellers of English words in American schools.

It goes beyond the top six as well. Here are the names and pictures of the 15 finalists. 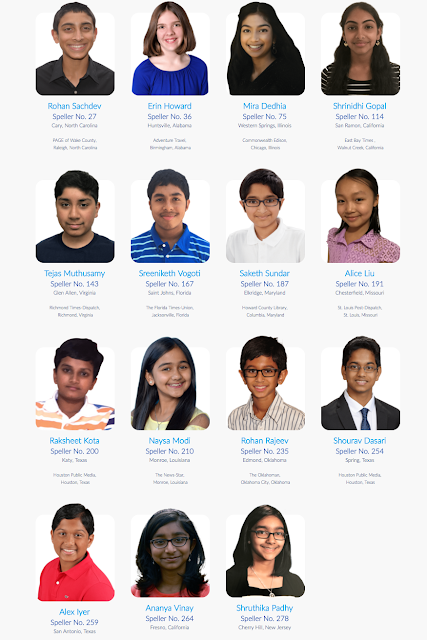 Ananya Vinay, the 2017 winner, is of Indian heritage as are the winners from the last ten years.

We hear people throw around the term "white privilege" and statements like the "deck is stacked" against minorities and immigrants in this country. We hear that the color of your skin defines you and makes it hard to succeed in America.

These students did not listen. They dedicated themselves and worked hard. They did not allow anything to define them other than their results.

I would guess that they also had supportive parents who encouraged their hard work. They did not tell them that the system was stacked against them. They told them that in America you could achieve anything you set your mind to.

The reality of America is that a great deal of success has resulted from those who had something to prove. Often times it was those of ethic, religious or national origins who were considered on the fringes or were discriminated against. These people believed they had something to prove, to themselves and others. Often times these were the children of immigrants who pushed their children to realize the American Dream.

Take a look at this graphic that shows the composition of the U.S. Math and Physics Olympiad teams and the College Putnam Math winners over time. The mix of who are the high achievers has changed over the years. A couple of groups have dominated relative to their share of the population. 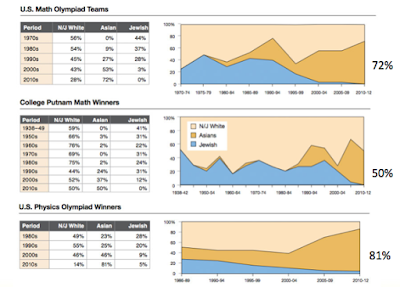 It used to be that these awards were dominated by Jewish students. My guess is that many of these students were also children of recent immigrants.

Today these awards are dominated by Asian students, much like the Spelling Bee is, although Asian-Americans only make up about 5% of the U.S. population.

Consider the most recent numbers this decade. Asian-American students have made up 81% of the Physics and 72% of the Math Olympiad Teams for the U.S. 50% of College Putnam Math winners are Asian-American.

These results and The National Spelling Bee finalists shows that preparation, practice, perseverance and parents can make a huge difference in achieving success.

The finalists in the National Spelling Bee should be an inspiration to us all that the American Dream is still alive for those who want to work for it.

It can't be spelled out any better than that.