Was Obama Ever President of the United States?

It seemed that for almost the entirely of Barack Obama's eight years in The White House, every problem or shortcoming was the fault of George W. Bush. Barack Obama could do no wrong.

Now that Donald Trump has been President for five months, to hear it from the Democrats and the media, there is not one problem that Trump has inherited from Barack Obama.

Every problem and every issue in America today is the sole fault of Donald J. Trump.

It is almost as if Barack Obama never set foot in the Oval Office. You have to wonder what he was doing for eight years.

The media portrays Trump as the most unpopular President of all time.

However, the truth is that Trump actually has a higher approval rating at this point in his Presidency than Barack Obama did in his second term according to the Rasmussen Daily Presidential Tracking Poll. 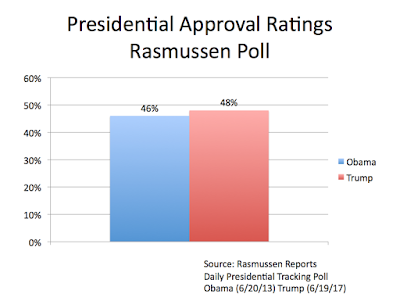 Have you seen this reported anywhere on the evening news?

The media seems to see its job to be to amplify anything and everything to advance their anti-Trump agenda. Therefore, anything that does not fit that narrative is simply not reported.

On the other hand, the media went out its way to turn down the volume on anything and everything that could have depicted Obama in a negative light.

That is why real scandals like Benghazi, Fast and Furious, NSA spying and the IRS intimidation of conservative groups died on the vine while we now are spending millions of dollars on a special counsel when there is absolutely no evidence that any crime has been committed.

How can I say that when potential crimes are supposedly being investigated by Special Counsel Robert Mueller?

Based on the simple fact that collusion (if there were any) is not a crime under federal statutes. Gregg Jarrett, the former Court TV anchor, explains.

Robert Mueller is tasked with finding a crime that does not exist in the law.  It is a legal impossibility.

As special counsel, Mueller can engage in all manner of spectacular jurisprudential gymnastics.  However, it will not change the fact that colluding with Russia is not, under America’s criminal codes, a crime.  It’s just not there.

Maybe it should be.  Perhaps someday Congress will pass a law criminalizing such conduct in political campaigns.  But for now, there is not a single statute outlawing collaboration with a foreign government in a U.S. presidential election.  Or any election, for that matter.

Why, then, are so many people who are following the Trump-Russia saga under the mistaken impression that collusion is a crime?  Principally, because it is a loaded word with an historic criminal connotation.

“Collusion” became a prominent part of the legal lexicon when Benjamin Harrison occupied the White House and Congress passed the Sherman Antitrust Act in 1890 outlawing collusion in some business practices.  Specifically, price fixing and other anticompetitive activities became a criminal offense under Section 1 of the Act.  Almost overnight, the wor
d “collusion” was converted into a legal pejorative.

But collusion is only criminal in an antitrust setting.  It has nothing whatsoever to do with elections.


Have you seen this reported anywhere on the evening news?

I mentioned this fact to a liberal friend of mine who responded, "Well, that may be but we need to know."

However, there were a lot of things that I wanted to know when Barack Obama was President that I never got an answer to.

I wanted to know what he was doing on the night of the Benghazi attack that was more important than monitoring what was going on as Americans were being killed in a terrorist attack.

I wanted to know why they made up the story about a video being the cause of the Benghazi attack?

I wanted to know what Loretta Lynch and Bill Clinton were really talking about on that airplane on the tarmac in Phoenix?

I wanted to know why the IRS targeted conservative groups but left the left wing groups alone?

I wanted to know why a Justice Department official pled the Fifth Amendment in the Fast and Furious investigation?

I wanted to know why they used NSA resources to target American journalists (and possibly Trump himself)?

I wanted to see Barack Obama's college records to see if he was ever registered as a foreign student?

Unlike Russian collusion, knowledge of the answers to some of these questions might actually show violation of federal criminal statutes.

We know Donald J. Trump is President of the United States. The media and the liberal left become more unhinged by the day in complaining about it.

A big reason for their anger is that the Obama agenda is being erased day by day. Executive order by executive order. The Paris Accord. Cuba. Coal regulations. Immigration enforcement.

The media narrative is also that the Trump administration and the GOP are inept and that no legislation is getting done. That is true thus far on the big issues of healthcare and tax reform.

However, the fact is that Trump actually signed twice as many bills into law than Obama did in his first 100 days. Trump and the GOP Congress have actually also done more than the Bush 43 and Clinton administrations did in their first 100 days. 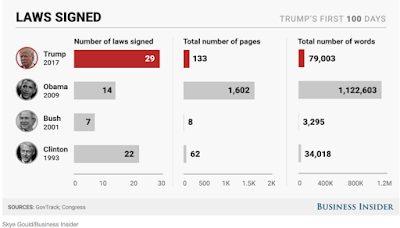 Those laws also are a lot less bulky than what was passed in the Obama years.

It takes fewer words to roll back or repeal government programs and regulations than it does to implement them.

Obama's failures were ignored and his "successes" are now being unwound.

Was Barack Obama ever President of the United States?