The Lies of Obamacare

We have heard the lies about Obamacare since Barack Obama first uttered these infamous words during his 2008 campaign for President.

The actual fact is that premiums have gone up substantially for most Americans in every year since Obamacare was enacted.

Interestingly, health care cost expenditures in the United States were relatively stable in the six years immediately before Obamacare took effect on January 1, 2014. Was it just a coincidence that health care starting taking a bigger share of personal expenditures beginning in 2014?

Medical care now consumes 17.2% of all personal expenditures in the United States. 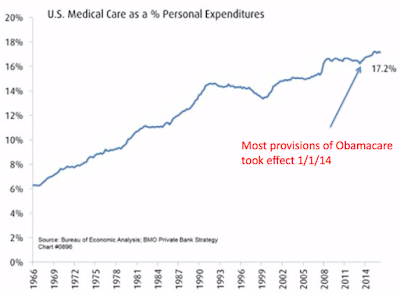 That original lie was followed by many more.

Millions of people have had their healthcare plans cancelled. Hundreds of thousands of other individuals were lured into selecting health care from newly formed non-profit co-op health plans under Obamacare with promises of low-cost coverage. Thus far, 20 out of the 24 Obamacare co-ops have failed. $2.2 billion of taxpayer funds that were used to capitalize these co-ops has been lost.

Another lie. Many plans have resorted to tighter and stricter physician networks. Millions have lost the ability to see the doctor they know and trust.

"I will not sign a bill that adds one dime to our deficits, now or in the future."

Barack Obama said it.  It just was not true. You can see this clearly by the Congressional Budget Office scoring of the House repeal and replace bill that projects $119 billion in savings over the next 10 years by enacting The American Health Care Act.

It is this budget savings that actually allows the Senate to take up the bill in reconciliation thereby allowing a 51 vote majority for passage than requiring the 60 vote cloture vote. A simple majority  is all that is required in a budget reconciliation vote that reduces spending.

Of course, who knows what to believe from the CBO?  It does not actually have the best record in its projections regarding Obamacare.

For example, look at how poorly the CBO did in projecting Medicaid enrollment. When the bill passed, the CBO projected 9 million new Medicaid enrollees in 2017. The actual number is over 50% higher. 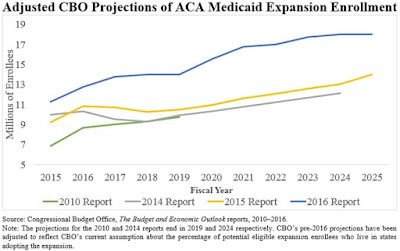 Similarly, the CBO projected in 2010 that 21 million people would enroll in the exchanges in 2016. The actual number---10 million.

You can see in this graph far the CBO has been off in its exchange enrollment projections.  Notice that despite any evidence that anything will change to make the Obamacare exchanges more attractive to health care purchasers, the CBO is predicting that enrollment in the exchanges will increase to 18 million next year (from 10 million today). 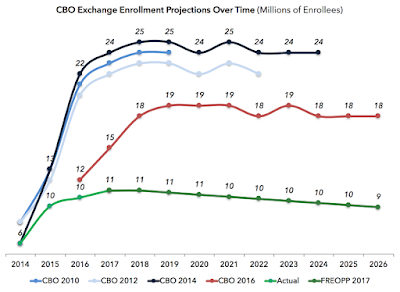 Those are not outright lies. It is just terrible forecasting.

I would not be so kind to the CBO in describing its analysis of the House bill in which it claims that 23 million Americans would lose coverage by 2026 if Obamacare is repealed.

Of course, the media latched on to that number and it has been driving a lot of debate on the bill.

How can Republicans be so mean to eliminate health care coverage for 23 million people?

Let's look at that number in more detail and you tell me if that is fact, fake news or another Obamacare lie?

How did the CBO get that number?

First, they are using that 18 million number in future projected enrollment although only 10 million currently have coverage through the exchanges today.

Therefore, reduce the 23 million number by 8 million. We are now down to 15 million actually "losing" coverage.

Second, the CBO is assuming that an additional 15 million Americans will become eligible for Medicaid over the next 10 years. However, 5 million of this number is assumed to be new enrollees in the 19 states that have not even expanded their Medicaid eligibility. Given that these states have given no indication that they will extend Medicaid under current law why is it a sound assumption to consider these individuals to be "losing' coverage they don't have today?

Add it all up and the argument can be made that on a net basis no one will lose coverage compared to today under the House Republican bill. It is all based on assumptions of future eligibility and greater numbers of future people qualifying for Medicaid in the future. It does not assume a better economy or anything else. It actually assumes more poverty and more people qualifying for Medicaid  than today.

Even if we give the benefit of the doubt to the CBO on that assumption, how can it magically assume that 19 states are going to expand their Medicaid when we are nearly five years into Obamacare and not one has done so to this point?

Worse case, the CBO number of people "losing" coverage should not be more than 10 million and a good argument could be made that it is zero. That is a long way from 23 million.

We have grown accustomed to those in Washington claiming budget cuts when all they are really doing is reducing future increases in spending.

They are now claiming people losing health coverage that don't even have it today.

The lies of Obamacare continue.