The Late, Not So Great, State of Illinois

Illinois is about to become the first state with a junk bond credit rating.

If it was not illegal to file for bankruptcy under federal law it would probably soon be filing.

Today is the deadline for Illinois to pass a constitutionally-required balance budget. Never mind the balanced part, Illinois has not even passed a simple budget plan the last two years.

It is doubtful that the third time will be the charm in Springfield.

Why is Illinois in such dire straits?

The biggest reason is that the politicians in Illinois gave the state away to the public sector employees. They promised generous pay and retirement benefits but failed to back up the promises with the necessary funding.

This is how CNN Money explains it.

While the budget impasse is throwing a spotlight on Illinois's dire financial situation today, the fiscal problems go back at least to the 1980s and involve politicians from both parties.

The most glaring evidence is the enormous pension crisis. Rather than dealing with the problem, Illinois continued to reward the state's powerful unions with more generous benefits.

The problem festered for so long that Moody's estimates Illinois has unfunded pension liabilities totaling $251 billion. To put that into context, that's more than the combined market value of four major Illinois companies: Boeing (BA), Caterpillar (CAT), United Continental (UAL) and Allstate (ALL).


Who have those politicians been for the last 20 years while the problem expanded and exploded? The first line is the Governor's office, the second is the Senate and the third is the House.

Note that the Democrats totally controlled everything in Illinois for over a decade. Republican businessman Bruce Rauner was elected in November, 2014 principally because he vowed to fix the mess. He has found, like Donald Trump, that it is not easy to get politicians to fix things. They are more adept at breaking things.

I wrote about all of this over three years ago and predicted that Bruce Rauner very well might win the Illinois governorship because of the fiscal problems in Illinois.

However, I also cautioned that Democrats were the only ones who could realistically fix the problem.

How true that appears to be today.

If you want a more in-depth look at the fiscal problems in Illinois I recommend this article by Illinois Policy.

However, this chart pretty well sums up what has happened in Illinois. What I wrote over three years ago bears reading again.

The late, not so great, State of Illinois.

If you want to see a simple graphical image of the influence of public sector unions, and their significant impact on state and local government spending (and the taxes you pay), cast your eyes (if you can bear to look) on the chart below. 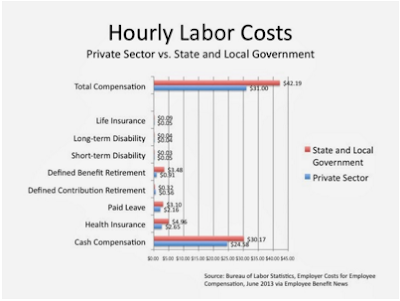 I came across this data in a recent issue of Employee Benefit News which was comparing the hourly cost of various employee benefit programs.

Several observations from the data.

Total compensation for the public sector is 36% higher than in the private sector.

Health insurance costs for the public sector are 87% higher than in the private sector.

Retirement costs for the public sector are 159% higher than in the private sector.

It is simply not sustainable to have public sector employees receive this much more in wages and benefits than the private sector workers who pay the taxes who foot the bill for these government workers.

We saw an extreme case of what happens when all balance is lost in the case of the city of Detroit. The public sector can never seem to adjust to circumstances as it needs to. However, it becomes almost impossible in any local or state government controlled by Democrats who are beholden to public sector unions due to the political contributions they receive from those union dues.

If we are going to restore fiscal sanity in this country the huge disparity between private and public sector benefits programs is going to have to be at the top of the list. The immense power that the public unions hold will not be easily reversed.  However, it must occur if there is any hope for many city, county and state budgets.

Democrats are in the best position to effect this reform since they control most of the political offices in the big cities and states (Illinois, California, etc) that have the biggest budget problems (that is surely just a coincidence!).

It is important to remember that there is no real legal or economic reason for the very existence of a public sector union in the first place. In fact, liberal luminaries in the 1930's such as Franklin D.Roosevelt and Fiorello LaGuardia were opposed to public sector unionism for the simple reason that it threatened the broad needs of the citizenry. That is why it was illegal for most government employees to unionize until well into the 1970's.

The historical basis for unions in the private sector is based on insuring a balance of power to insure that workers receive a reasonable share of profits and work in safe and sanitary conditions. Governments don't make profits to share. They only levy taxes. In addition, has anyone ever heard of a government worker working in a sweat shop? They also work in a monopoly situation meaning that if they provide poor service, no service, or they strike, there is no corresponding power by the consumer to go elsewhere as there is with a private sector business that is unionized.

In addition, in the private sector, unions are balanced against managers who have a natural incentive to push back on union demands. In the public sector no such tensions exists. More often than not the elected officials on the other side of the bargaining table are incentivized to give in to the unions for their own political survival. Those politicians often know that they would not have been elected (nor will they be reelected) without that public sector union money flowing into their campaign coffers.

Why did the Democrats change their views about public sector unions? In a word. MONEY.

Beginning in the early 1960's the Democrats decided that the political advantage of having the political and fundraising power of these unions behind them outweighed any concerns about taxpayers and the broader citizenry.

Since the Democrats got us into this mess they are in the best position to get us out of it. Much like it was easier for Nixon to open up relations with China, Reagan to begin nuclear disarmament talks with the Russians or Clinton to sign welfare reform legislation.

However, if the Democrats are unwilling or unable to do initiate the change, the voters may increasingly look to the Republicans to do it. We have already seen this in Wisconsin, Indiana and some other states.

An interesting test of this idea looks to be coming up in Illinois this Fall where wealthy, former private equity executive Bruce Rauner won the Republican nomination for Governor.

The centerpiece of Rauner's campaign was a vow to take on the "government union bosses".  Labor groups spent heavily against him during the primary and will be going after him with millions more in the Fall. There is no state in the union where the public sector unions hold more sway than in Illinois.

It will be interesting to see how this plays out.

I don't know how the needed balance will be restored to the system.  All I know is that it will occur. A system in which the takers end up with more than the makers will eventually fail. We can control the consequences or we can face the chaos when it crumbles. The choice is ours.