Those that are regular readers of BeeLine know that I love data.

You would then have to know it was love at first sight when I came across the Twitter feed of @DataIsBeautiful. 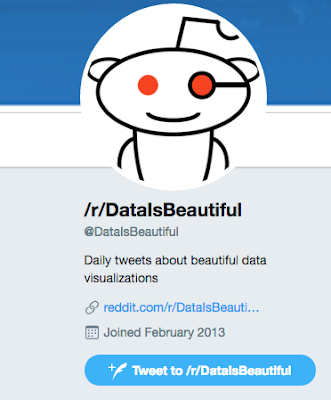 @DataIsBeautiful provides a steady stream of beautiful data visualizations to provide you with better insights into almost everything you might (or might not) need to know.

For example, what time of day is President Trump most likely to tweet? 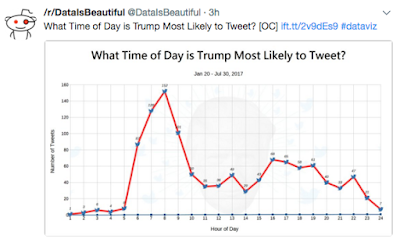 Trump gets his mind (and fingers) working early in the day. He must get motivated watching those early morning news shows.

How about the changing face of the most valuable brands in the world. Four out of the top five today are newcomers since 2006. Tech brands are in control. Notice as well that each of the top brands is an American company and this has been the case since 2006. My how Marlboro has fallen. 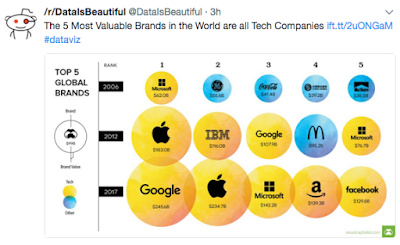 Over a century ago, Albert Thayer Mahan stated that "whoever rules the waves rules the world." If that is still the case, China is now challenging the United States in this chart showing "Major Military Wasrships 1970-2009". 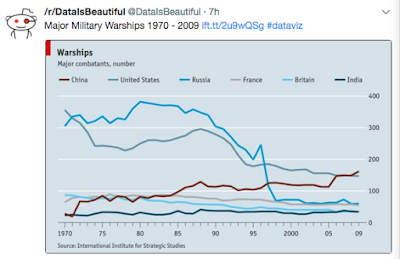 Note how far Russia has fallen. The United States has also reduced its fleet by over half over that period. Great Britain's fleet has also been cut in half.

Concerns about nuclear energy? This chart says that fear is misplaced. 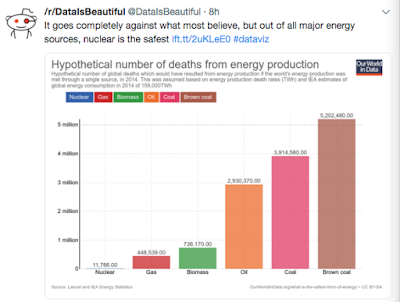 Do you want to stop annoying your fellow office mates? Avoid this office jargon. 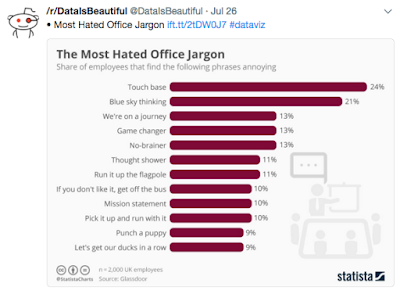 We're on a journey here so don't quit reading yet.  No blue sky thinking ahead but I want to touch base and run a few more things up the flagpole with you from @DataIsBeautiful. Then again, if you don't like this data, now is the time to get off the bus.

This is the original source graph  of a link cited in @DataIsBeautiful on the Frequency of Dining Alone by age. Data is provided in this graph as the percent of meal spent alone in both 2003 and 2015. The original graph appeared on Pudding.cool

As you see, the general trend is that as we get older we tend to eat more meals alone. However, this trend is particularly pronounced as we age through the teen years until we get married. It then falls through the twenties (more people getting married at these ages) until we hit the mid 30's and it inexorably increases over time. Divorces and deaths clearly are a part of this equation from that point forward. 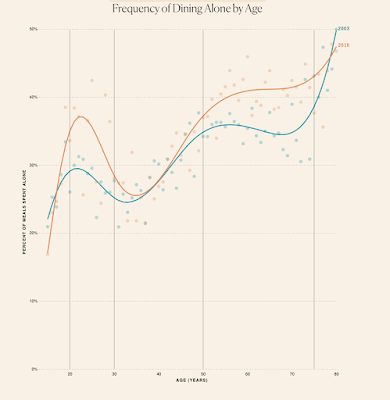 What I found interesting in this chart is the noticeable increase in the number of people eating alone in their early 20's in 2015 compared to 2003. This clearly seems to be a result of later marriages.

Speaking of divorces, this chart from FlowingData.com was linked by @DataIsBeautiful that shows divorce rates by occupation.

Who do you marry for the best chance to not be eating alone? 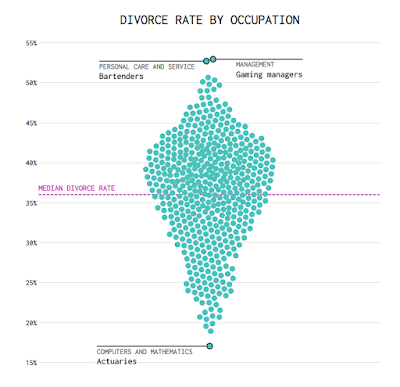 Who should you avoid marrying if you don't want to eat alone?

Bartenders and Gaming Managers. Of course, even if you don't get divorced marrying someone in these occupations means that you are probably going to eat a lot of dinners alone anyways considering their hours.

One other interesting chart on divorce rates from FlowingData.com looked at median salary rate for the various occupations vs. the divorce rate. As you might expect, tighter incomes puts more pressure on marriages.

This chart also confirms what many a mother has told her daughter over the years (and looking at recent medical school enrollment numbers , what father's should be telling their sons today) . 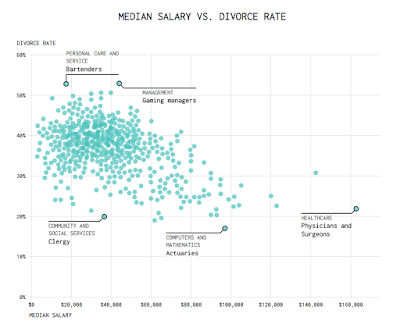 Data is beautiful!
Posted by BeeLine at 8:51 PM