President Trump has recently returned from the G-20 summit in Hamburg, Germany.

The anti-capitalist protestors called it "Welcome to Hell". I guess they have not visited North Korea or Venezuela recently.

They actually seemed to create "Hell" with their presence in Hamburg. 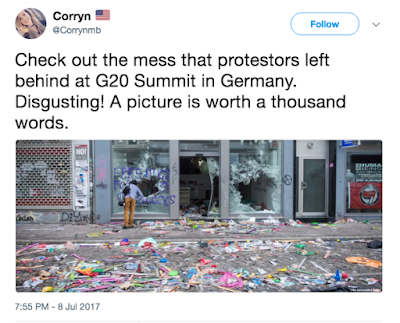 Donald Trump made the trade imbalance of the United States a major issue in the campaign. He stated that the United States was being particularly disadvantaged in trade with China and with the NAFTA countries of Canada and Mexico.

What are the facts?

I came across the chart below in an article previewing the major issues at the G-20 summit by Stratfor. It shows the trade balance that United States has with each member of the G-20.

It puts the trade issues in context. I think it also shows that Donald Trump knows what he is talking about irrespective of the talking heads on the network and cable news who try to minimize him at every turn.

Does this look like the United States is "winning" when it comes to international trade? 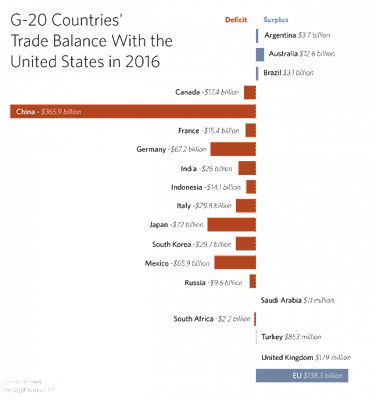 China's $366 billon trade surplus is not a surprise although it is always shocking to look at the numbers. In 1993 the trade deficit with China was a mere $23 billion.

However, look at the numbers with the NAFTA countries-Canada and Mexico. The United States ran an $83 billion trade deficit with those two countries last year.

When Bill Clinton submitted the North Atlantic Free Trade Agreement to the U.S. Congress for approval in 1993 the United States had a $5 billion trade surplus with Mexico. It is now a $66 billion trade deficit. The trade deficit with Canada has grown from $11 billion to $17 billion.

Here is what President Clinton said at the time.

I believe that NAFTA will create a million jobs in the first 5 years of its impact. And I believe that that is many more jobs than will be lost, as inevitably some will be, as always happens when you open up the mix to a new range of competition.

NAFTA will generate these jobs by fostering an export boom to Mexico, by tearing down tariff walls which have been lowered quite a bit by the present administration of President Salinas but are still higher than Americas'.


Looking at the numbers above and knowing what has happened to U.S. manufacturing jobs over the last 20 years, has NAFTA been anything close to what we were told it would be?

When Mexico also has a $66 billion trade surplus with the United States, don't you also think that Trump has a little leverage when it comes to who will pay for the wall he wants to build?

I also found it interesting from the chat above that the United States actually ran a trade surplus with Saudi Arabia last year. In 2008 the United States had a trade deficit of $42 billion with the Saudis. Imports from Saudi Arabia dropped from $55 billion to $17 billion in a span of eight years. Can you say fracking? Williston Basin? Permian Basin?

There are many who continue to argue that Trump's statements and positions on trade are irresponsible and could provoke a trade war.

However, if you look at the chart above, who has more to lose? The reality is that our trading partners have far fewer options when it comes to their economy than does the United States in any altercation involving trade.

What is most interesting is that a recent study suggests that Trump's aggressive statements about trade might actually be working to benefit the United States while also actually leading to more free trade.

HotAir.com has the story.

The Center for Economic Policy Research in London has just reported that the other 19 G-20 economies took 52 steps against United States commercial entities in the first six months of this year.

And that, the Center reports, is — wait for it — down 29% from the first six months of last year when someone, let’s say, more aloof and less outspoken was president of the United States. These actions against U.S. interests include quotas, duties and tariffs on imports from the U.S., measures against dumping and tax incentives for exporters that could adversely U.S. companies.

Simon Evenett, one of the authors of the Global Trade Alert and a professor of economics at Switzerland’s St. Gallen University,  puts it this way:

Evenett thinks such countries have gotten the tougher message out of the new Trump administration.

“It is actually possible,” added Andrew Kenningham of Capital Economics, “that rather than prompting a global trade war, Trump’s rhetoric and policies may have little effect or even lead to more free trade.”


It does not get much worse for Trump's critics than that.

We often hear how much they fear Trump and his policies.

However, as I wrote shortly after Trump was elected, the biggest fear that the Democrats and Never-Trumpers have is not that Trump will fail---it is that he will succeed!