Parents Are The Problem?

There was an interesting column by David Brooks in The New York Times recently on the topic of "How We Are Ruining America."

According to Brooks, those that are ruining America are the members of the college-educated upper middle class who have become parents and are now in the process of ruining America by dedicating their lives to insuring that their children also have the opportunities to succeed.

He is not happy with the so-called "behavior codes" that these parents are embracing "that put cultivating successful children at the center of their lives."

I thought the core idea of parenting was to exhibit behavior codes that are intended to cultivate successful children.

Brooks questions it all. He seems to see it as a crime that parents are involved and want to invest in their children.

As soon as they get money, they turn it into investments in their kids.

As life has gotten worse for the rest in the middle class, upper-middle-class parents have become fanatical about making sure their children never sink back to those levels, and of course there’s nothing wrong in devoting yourself to your own progeny.


Nothing wrong with it? I would think most people would say that there is everything right with.

If Brooks left it like this it would be bad enough. However, he takes it a step beyond and makes the argument that successful college-educated parents are actively working to make sure that "children of other classes have limited chances to join their ranks."

I am not sure how that squares with his argument about how important "behavior codes"are in bringing up children.

Aren't there both positive and negative behavior codes?

Brooks seems to be another progressive, liberal that wants to find fault with everything and everyone but those who actually should be accountable.

Exhibiting the right behavior codes has little to do with how much money or education one has. I have known highly educated, wealthy people who were terrible parents and their children proved it.

On the other hand, I have known people who did not have two dimes to rub together who nevertheless exhibited great behavior codes and also had the children to prove it.

It used to be that almost every parent's dream was that their children would have more opportunities than they did. This was particularly true for generations of immigrants and poor families. Brooks suggests that zoning restrictions, poor inner city schools and college admission policies today make that impossible today.

There have always been rich neighborhoods. Inner city schools have better funding than ever before. Look no further than the District of Columbia. Federal student loans are readily available for almost everyone who wants to go to college. That was not the case for my father and grandfather.

I have written before that there is a lot more income and class mobility than is generally acknowledged by members of the progressive, liberal establishment like David Brooks.

For example, children born in Houston, Texas (considered to be the most ethnically and racially diverse city in the nation) whose parents are in the bottom 10th percentile on income end up, on average, in the 38th percentile by age 30. 22% of the poorest end up in the the top 20% of income earners. 42% are in the middle class or better. That seems to contradict the basic thesis of Brooks that the poor are being kept down.

On the other hand, despite the best efforts of their upper class parents, children with parents in the upper quintile do not automatically get a free pass to stay on top. On average, only about 35% of children raised in households in the top quintile enjoy the same income lifestyle as their parents when they are adults. This chart (published in a New York Times story on the study) shows the chances of someone raised in both the bottom fifth and top fifth ending up in the top fifth as an adult.

It makes you wonder if progressive liberals like Brooks read the New York Times that they are writing for? 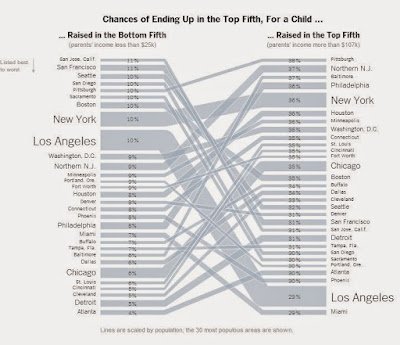 I could also not help thinking of the Brooks column as I watched the U.S. Women's Open this weekend that was played at Trump National Golf Club in Bedminster, New Jersey.

There was not one American in the Top 10. Nine of the top ten finishers were Asian---eight were South Korean.

It looks a little bit like the finalists in the U.S. Spelling Bee except they all had parents of Indian heritage in that competition.

Do you think the behavior codes of the parents of these players might have something to do with this? I have to think these parents dedicated their lives to insuring that their children would succeed at the game of golf.

As well as the behavior codes of the young ladies who practiced, persevered and prepared for the thousands of hours it took to get their games to this level.

I guess Americans need to take those South Korean parents to task for actively working to make sure that "children of other classes countries have limited chances to join their ranks."

I will wait for the Brooks column on that subject.