Colleges do a lot of things today that make you wonder what has become of education.

I can think of no better example than the "Gender Studies" major.

What exactly does a student majoring in "Gender Studies" do for a living after they graduate?

Don't get me wrong, there is a lot of value for anyone in understanding the differences between males and females. These differences have confounded men and women from the beginning of time.

We interact every day of our lives with people we do not fully understand. How much easier life would be if we had better insights on the differences in gender?

Are men really from Mars and women from Venus?

However, Gender Studies in colleges and universities seem not to be interested in teaching the differences in gender but seem more intent on political and social statements or pretending that gender is just a name---and not science. 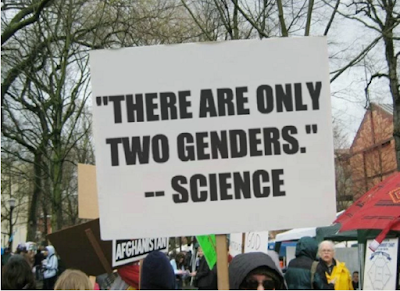 For example, here is how UCLA describes its Gender Studies department.

The Gender Studies department provides a quality education that emphasizes analytic and writing skills, qualitative research methods, and a historical and transnational understanding of social inequalities. Our faculty integrate feminist pedagogical approaches and their own research into their teaching. Our core courses address the concepts of gender and the body, gender and power, and gender and knowledge through a range of topics such as freedom and liberty, social movements, masculinities, work and leisure, politics of social justice, intersectionality, colonial and sexual violence, and visual culture and citizenship.


Incredibly, there are 250 students majoring in Gender Studies at UCLA according to its website.

Count me as one parent that would not like to be paying the tuition bills for that course of study for my child. Of course, I am on the hook for it whether I like it or not, as is every other American taxpayer, in the form of federal student loans that now total over $1.4 trillion.

Meanwhile, the University of Tennessee, has encouraged all of its faculty and students to stop calling each other "he", "she", "him" and "her".

UT-Knoxville even put a handy conversion table on its website to facilitate the changeover. 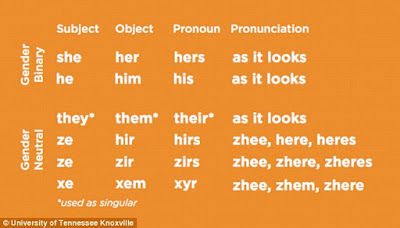 If this is the thinking at the University of Tennessee I can only imagine what it is like at Berkeley, Bennington and Bowdoin.

Who are the students majoring in Gender Studies?

You would think there should be equal interest in the subject material if it was a fair and balanced view of gender studies.

However, this picture on the UCLA website of its Gender Studies graduates does not show one male. Gender Studies seems to be nothing more than a cover for Feminist Studies.

Of course, it is not unusual to see women outnumbering men in college classrooms these days. It is a big problem that I have written about previously. An unintended consequence of the dearth of male college graduates (about 6 women graduate from college for every 4 men) is that fewer women are marrying.


It seems that there is a gender difference involved. Is this being studied in Gender Studies?


How are these gender differences playing out in the real world?

It seems that the oversupply of educated women in the world is now causing increasing numbers of women to freeze their eggs due to the dearth of equally qualified men according to a new study which was led by researchers at Yale University.

Researchers found that in more than 90 per cent of cases, the women were trying to buy extra time because they could not find a partner. Experts said the study busted the myth that “selfish career women” were choosing to stall their fertility to prioritize their careers.


Another subject for the Gender Studies department?

While we are on the subject of how men and women are wired differently, this is another interesting chart I came across recently. Unfortunately, it is small comfort to the unfortunate women who have not been able to find love and are spending thousands of dollars to buy precious time on their biological clock.

It seems that there are huge differences in how men and women view each other.

A big one is that time is more fixed for women. It is much more flexible for men.

These charts put that in context with a large exclamation point. They compare a woman's or man's age to the age of the opposite sex who look best to them.

You can see from the data that women generally find that men of approximately the same age look best to her. They prefer men a few years older when they are younger and a few years younger in later years but there is not a lot of variation from their own age. 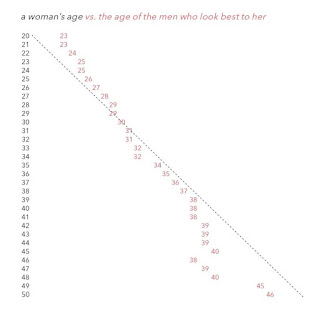 Men have an entirely different perspective. I stated above that men looked at time in a more flexible way. I guess it depends on how you define the word "flexible". 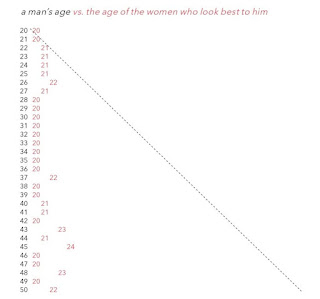 Yes, there are real gender differences. It may not be politically correct in this day and age. Our colleges might want to re-label the charts above with with "Xe" or "Zir". However, pretending these differnces do not exist does not make it go away.

Is any of this being studied in Gender Studies?
Posted by BeeLine at 8:53 PM