Why Is Health Care So Expensive?

Why is health care so expensive in the United States?

This chart compares per capita health care expenditures with life expectancy between various industrialized countries around the world.

The United States is spending significantly more than most developed countries yet it has life expectancies that are lower. 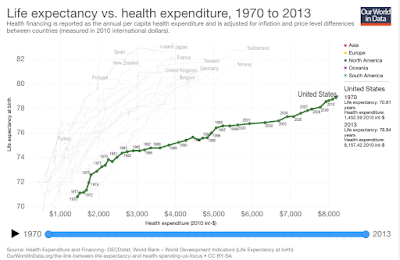 Why is that and what can be done about it?

There are a number of reasons why we get the health care results we do in America.

Technology. Most health care technology is developed in the United States and it is also more broadly and widely used than in the rest of the world. A case in point is that in 2008 (I don't know if it is still true) Pittsburgh had more MRI machines than the entire country of Canada. However, not every technology adds value. In fact, in most businesses, added technology lowers costs and makes things better. That has not been the case with health care. More technology has just meant higher costs.

Choice. Americans have much more choice in their treatment and care. For example, in Canada it can take months of waiting to have surgery. The average wait time was 20 weeks for surgeries in Canada in 2016. For neurosurgery it was 47 weeks. For orthopedic surgery the average wait was 38 weeks. Countries with socialized medicine limit care to limit costs.

Consider knee replacement rates across the globe. The United States has nearly twice as many procedures per 100,000 population as the world average. This chart also does not adjust for age. Older populations should require many more knee replacements. Countries like Austria, Finland, Germany, Switizerland, Canada and the U.K. all have much older populations than the U.S. For example, the median age in Austria is 43.8, it is  46.8 in Germany and 42 in Canada. It is 37.9 in the United States. 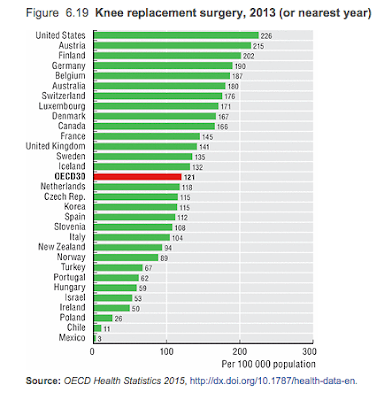 I recently heard two people discussing health care costs. One was very much in favor of more government involvement in health care. He cited the Veteran's Administration as an example of something that has been successful. His friend laughed and said something about the waiting times and the bureaucracy of the VA. The proponent agreed but said it could be solved by hiring more doctors, nurses and administrators. However, that is the problem with socialized systems of care. Costs are kept down by limiting the supply. There is no other way to do it.

Wealth. A big reason that health care is expensive in the United States is that there is a lot of money to spend on it. It is also true that a lot of that money is also someone else's money. When it comes to your health or the health of a loved one, there is almost no limit on what you will spend for their care. There is absolutely no limit if someone else is paying the bill.

I recently highlighted a chart from Mary Meeker's 2017 Internet Trends report that showed the percentage of health care expenditures in various countries that were paid out of pocket. Barely 20% of health costs in the United States are directly borne by the patients that receive the treatment. In Mexico and India it is around 90%. In China it is over 70%. In the U.K. and Germany it is over 50%. 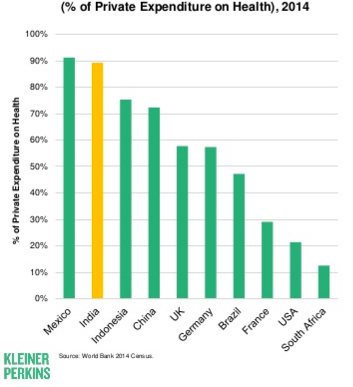 In the United States someone else is usually paying the medical bill and it should be predictable what the effect on costs that will have. Very few will not want to expend effort and every dollar for their care or for that of a loved one.

Health. Our wealth also is affecting our health. Too many Americans eat too well and exercise too little. That combination takes a toll on longevity. You can have the greatest health system in the world but outcomes are going to be dependent on the conditions of the patients.

This particularly true for older Americans. One global study found that 68% of elderly Americans had two or more chronic conditions. The next highest country in the world, Canada, had 56%. In the U.K. it is only 33%.

It is not much different in looking at inner city schools. These schools generally are spending enormous sums of money compared to rural districts. However, the outcomes of the inner city schools are generally vastly inferior to the rural districts that are spending far less money. A lot has to do with the students they get coming into their classrooms.

Outcomes are heavily dependent on inputs ---in education...and in healthcare.

If you don't think that wealth affects health, take a look at this graph that I recently came across that shows global cancer incidence and mortality by region.

What I found striking in looking at cancer incidence is that the highest rates of cancer are all in areas that are generally the wealthiest parts of the globe. Cancer incidence is lowest in those areas which are the poorest. 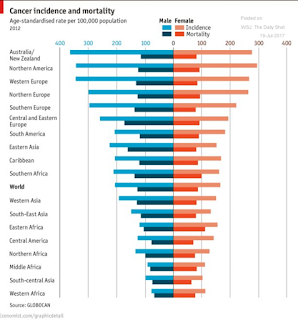 For context, here is a map that groups countries by how advanced their economies are. 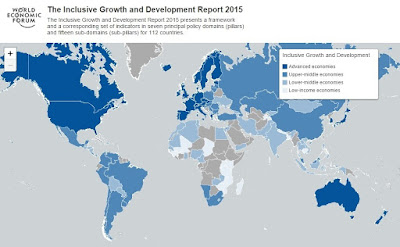 Of course, as you might notice, the survival rates are much, much higher in the advanced economies and they are very, very low in the low-income economies. The end result is that deaths from cancer are remarkably consistent across the world although the incidence of the disease varies greatly. The incidence of cancer in North America is 3 times that of South-central or Western Africa but mortality is about the same.

All of this comes into better focus when it is considered how much of health care is spent in the United States on the elderly. Despite the higher overall per capita cost of health care in the United States, costs up until the age of 55 are about the same as in other countries. Our costs explode beginning at age 65 when Medicare takes effect. Therefore, the entire difference in our higher per capita health care costs are due to vastly higher costs for the elderly.

This chart, that was originally developed by Carnegie Mellon University professor Paul Fishbeck, compares our per capita health care costs by age to Germany, UK, Sweden and Spain. It graphically demonstrates this reality. It was also prepared before Obamacare took effect meaning that we may have actually be in worse shape in the younger age cohorts than we were before. 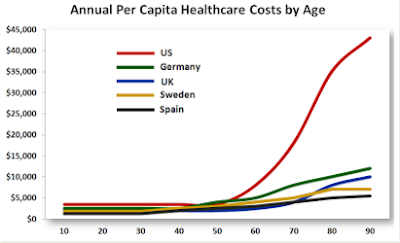 Liberal progressives argue that we need to move to a Medicare-for-all approach to lower our costs. They argue this would lower costs-especially administrative costs. However, this data suggests that the costs for the elderly---primarily covered by Medicare in the U.S.--- is exactly where we are most out of sync with the rest of the world.

This should raise concerns that turning more of the health care system over to the federal government (via Obamacare or anything similar) may be a path to further worsening our health care cost situation, not improving it.

All of the above should provide you with a better perspective of why the United States has higher costs than than rest of the world.

As you can see, it is a multi-dimensional problem that is extremely complicated. There is no easy answer. In fact, everything suggests that the problem will get even worse no matter what the policymakers do. Every factor above is trending against controlling health care costs.

More and more medical technology becomes available everyday. Americans have rebelled against every attempt to limit choice in selecting doctors, hospitals, etc. Americans are getting older. Americans are not getting any healthier and the United States still has more money to spend on healthcare than any other country. Attempts to control costs are akin to trying to change course heading into a Category 5 hurricane.

What can be done?

I guess the simplest answer is the one that the "sustainability" lobby is promoting today as the best way to save the planet from climate change. It is argued that this would have the biggest difference in saving the planet from carbon emissions.

Don't have a child.

The same is obviously true for health care.

Solutions are so easy in the liberal mind.
Posted by BeeLine at 7:51 PM