There is one thing that both Republicans and Democrats agree on.

Health care coverage in the United States is unaffordable.

However, neither party seems to have a good prescription on how to deal with it.

That led to the misguided Obamacare bill that has proven to be nothing short of disastrous.

It is unclear at this point what the GOP thinks should be done. Some Republicans want to just repeal Obamacare. Some want to replace it. Some want to revise it. However, I have not seen anyone argue for attempting anything revolutionary regarding healthcare as I suggested last March.

That blog post was the most popular piece I have written this year in terms of views. It must have struck a chord somewhere.

Since the U.S. Senate is at a standstill in its health care discussions, I thought it might be worth revisiting that post as a Friday Favorite. Feel free to forward to your favorite Senator.

My suggestion for a broad-based tax to finance the cost of the catastrophic coverage would include some type of import or border tax. If we are going to allow imports access to our market it is reasonable that they should help bear some of our social costs. This also has the advantage of being very consistent with President Trump's economic policies.

If he wants to truly "Make America Great Again" what could be better than a universal health care plan that is paid for by a tax on imported goods?

I was an early critic of Obamacare and have also been very skeptical of Republican efforts to repeal and replace the law.

How can I be so critical of Obamacare but also so skeptical of GOP efforts to repeal it? I might add that I have become even more skeptical of the efforts at repeal since I have seen the GOP bill that would attempt to do so.

I wrote a blog post in 2013 before the Obamacare law became effective that predicted its failure due to its neglect of the realities of the health care cost curve.

Until we recognize the reality of the health care cost curve, the fact that many people will avoid paying for health insurance on their own, and the failure to align incentives and penalties, we will continue to be frustrated with the costs and consequences of our U.S. health care system. Instead of improving a bad situation, Obamacare is only going to make a bad situation even worse.  It's in the curve.  If we really want to do something about health care in this country, we need to first consider the curve or we will continue to see bad consequences.


What is the health care cost curve?

This is a graphic depiction of it from that blog post. The absolute dollar numbers are a little dated but the distribution of the costs across the population are true year after year. 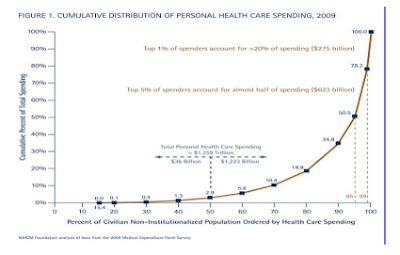 I administered large self-insured corporate group health plans for over 20 years and the same distribution of costs is found in any large group.

The reality is that most people have very little in healthcare costs in a given year.  A handful of people will have enormous costs.  A few will have very large costs.  The majority will have almost no costs.

For example, the bottom half of a population will only consume about 3% of the costs of the group.

The top half will consume 97%.

The top 5% will consume 50% of the total health care costs.

This is why most people will gamble if left to their own devices if they are faced with expensive health care insurance. They will simply not part with their money today against the chance that they might get sick tomorrow. That is basic human nature.  Live for today and think about that other stuff tomorrow.

In fact, most people will pay no more than 20% of the true cost of health insurance without showing significant resistance to its cost. It is not a coincidence that many corporate plans (and even Medicare Part B premiums) charge 20% of the full cost of premium to the enrollee.

This is why Obamacare failed to attract the young and healthy to its risk pools. The insurance costs too much (even with generous subsidies) for the young. In fact, almost every Obamacare enrollee is getting substantial subsidies. Total cost last year= $56 billion and people still complained about the cost. Of course, Obamacare made the insurance even more expensive for this group by mandating all sorts of costly benefits while also requiring premiums for older, sicker Obamacare enrollees to be no more than 3 times the cost for younger enrollees. The actuaries would set that number at 5 times.

On the other hand, Obamacare was a great deal for the 5% or 1% who consumed most of the healthcare. And they made it even easier by allowing those people to wait to enroll until after they got sick with very limited penalties.

The GOP effort will not be materially different from what I have seen. It will improve some things at the margins but it is still not considering the health care cost curve and its consequences in its design as well as aligning incentives in relation to human behavior.

What type of plan should the GOP consider? It needs to be revolutionary and it probably has to go where the GOP would not be expected to go by proposing an across the board tax to fund some of the costs.

It starts first with the concept of the federal government assuming the role of providing some level of catastrophic insurance or being the reinsurer for private carriers for those with large claims costs. In effect, you take 20-50% of health care costs and you fund them nationally.

These are costs that anybody in our society may have to shoulder and almost no one is able to do so without some type of insurance coverage.They become costs by and for the "public welfare".

That federal coverage might attach at a level of $100,000, $250,000, $500,000 or some other level of claims in one year by one person. Private coverage would only have the liability up to that amount. It is a cost/benefit question of where you set that level and how much revenue is needed to fund this cat coverage.

Due to the fact that this type of coverage would benefit everyone it should also be financed by a general broad-based tax. That is the only way to do it if we want some type of universal health care coverage.  Everyone should contribute to the cost of the coverage as everyone has the potential to benefit. In this way it would be much like Social Security and Medicare. This avoids the problem of people deciding they will not buy the coverage on their own. They will be automatically enrolled in catastrophic coverage where the costs can most affect the risk pool for the rest of us. (see the cost curve above)

If it is desired to provide coverage for routine medical care it should be done with some type of health savings account amount that would be provided to everyone annually. For example, $500 per year that could be used for routine care and which could be rolled over to subsequent years if it was not used. This provides an incentive for people to use their health care money prudently.

Private insurance would only be used to fill the gap between the annual amount and the level of catastrophic coverage. This should bring the cost of insurance premiums down significantly.

Private insurance could also be used creatively to fill that gap. Some plans might offer comprehensive coverage which would be very expensive. Some might offer very limited coverage and be cost effective. There could also be income-based deductible plans to benefit the poor or the federal catastrophic coverage could have lower attachment points for those with lower incomes to lower the gap insurance coverage costs for these groups.

If you don't think this would have a large effect on insurance premium costs consider my personal experience in shopping for health care coverage for Mrs. BeeLine who needed a short-term policy for less than 6 months between expiration of group coverage and the start of her Medicare coverage.

An Obamacare policy for her cost $805/month. A catastrophic plan with a $1 million limit (still generous for 6 months) cost $173/month. A big difference in the cost is that open ended cost liability that the carrier assumes. Of course, Obamacare regulations under the Obama administration made it illegal to buy the limited plan even though it perfectly fit my wife's needs. The irony is that the "catastrophic" plan actually had a lower deductible and out of pocket costs than the Obamacare plan. That is how bad Obamacare really has become.

Private insurance would not be required but those who used healthcare services and could not pay due to failure to have health insurance, the federal government would enforce payment through liens on future pay (or federal benefit payments). Such payments could be enforced up to a healthy percentage of an individual's future income or benefits. This would be a necessary penalty to insure there was an incentive to buy insurance currently.

Obamacare is not structured anything like what I am suggesting and the GOP should not be trying to fix it with anything resembling it. It will be nothing more than Obamacare Lite as many are already calling it. The GOP should truly be repealing and replacing it.

Obamacare is the opposite of what a well thought out national health care policy should be in almost every respect. It assumes that healthy people can be convinced to voluntarily sign up and pay for health insurance. This has proven to be a fallacy.

It tries to focus coverage on low end services by providing a lot of free stuff like preventive exams, contraception services and the like.

It does not use a broad-based tax but rather taxes select people or groups (medical device manufacturers, high incomes etc) to fund the free stuff making it nothing more than a gigantic redistribution scheme.

It does not do anything to try to align incentives to make sure people have some "skin in the game". In summary, it has done very little to address the biggest problems in health care---high costs, affordability and access.

There is a way to repeal and replace Obamacare.

A revolutionary plan along the lines I am describing has some elements that both Republicans and Democrats should like. There are also elements that both would dislike. That tells me that it is probably a sensible replacement approach.

It just will take some revolutionary thinking to do it.

And some political fortitude.

Unfortunately, neither seem to be in evidence in Washington today from what I can see.