In 1996, amid predictions of disaster and impending doom from the Democrats, President Bill Clinton signed welfare reform legislation that was passed by a Republican Congress. Liberal groups claimed that the legislation would result in substantial increases in poverty, hunger and other social ills. In particular, they claimed it would result in increased child poverty.

After all, isn't it always about the children when it comes to politicians and social issues?

The proponents of welfare reform were concerned that prolonged welfare dependence had negative effects on society and the development of children. Their goal was to disrupt inter-generational dependence by moving families with children off the welfare rolls through increased work and marriage.

Underlying the welfare reform law was a simple requirement that a portion of the able-bodied adults in the Temporary Assistance for Needy Families (TANF) program needed to work or prepare for work if they wanted to receive welfare assistance. Welfare was not intended to be a lifestyle. It was designed to allow someone to build a bridge to a productive life.

After welfare reform was enacted a miraculous thing occurred. More people that were on the TANF program started working and fewer people stayed on welfare. Welfare rolls were cut in half over the next decade and the poverty rate for black children reached its lowest level in history.

The Great Recession blunted the advances that were being made in confronting the inter-generational dependency on welfare only to have President Obama fully gut all that progress by jettisoning the law’s work requirements in 2012 by bureaucratic order.

Is it really the Democrat party anymore? Or has it just become a Dependent Party?

I wrote in April about how Maine is once again enforcing a work requirement on able-bodied adults in order to receive food stamps (officially called the Supplemental Nutrition Assistance Program (SNAP).

What happened once Maine starting enforcing the rule this year?

75% of these people decided that the idea of working, getting trained or volunteering was too much effort to expend to continue getting food stamps. Maine had 12,000 such individuals receiving food stamps at the beginning of the year---it now only has 2,680 as of the end of March.

Maine is a small state. Georgia is a much bigger state. It has recently started rolling out a similar program.

The blog Political Calculations tells the story of what happened when Georgia ran a simple social welfare experiment in selected counties in the state beginning last year.

The result---200,000 individuals dropped out of the food stamp program in just one month after the work requirement was instituted!

Earlier in 2017, the state of Georgia ran a social welfare experiment, which resulted in the state decreasing the number of welfare recipients enrolled in the state's Supplemental Nutrition Assistance Program (SNAP) by over 200,000 individuals in a single month.

Georgia's secret? Back in January 2016, the state launched a pilot program in three of the state's counties requiring all able-bodied food stamp recipients without children to find work or lose their SNAP benefits. In August 2016, the state expanded the program to 24 counties, and also set a hard deadline of 1 April 2017 where all childless, able-bodied SNAP beneficiaries in these counties would become ineligible for the state's food stamp program unless they were employed.

Perhaps the most remarkable aspect of the data is the sheer drop in enrollment levels in the month before the hard deadline came and went, where if jobs were truly hard to obtain for the affected SNAP benefit recipients, we should have seen the enrollment levels stay elevated through March 2017 before seeing such a sharp decline resulting from their loss of eligibility. It also far outstrips the state's previous experience in enforcing work requirements in its food stamp welfare program to reduce its welfare rolls, which came as part of the 1996 Welfare Reform Act. 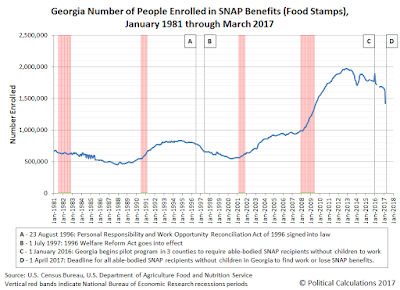 Notice how the food stamp rolls declined right after the 1996 Welfare Reform Act only to start to climb after the 9/11 economic effects followed by the disastrous Great Depression of 2008-2010. You can also see that the food stamp rolls looked like they might be ready to level off in 2012 right before the Obama administration changed the work requirement rules. From that point forward, another 250,000 people went on food stamps in Georgia until it topped out at 2 million in 2014.

Let's put that 2 million number in context. The city of Atlanta has a population of around 460,000. At one point in time, 4.5 times the number of people who live within the city limits of Atlanta were on food stamps in the state of Georgia. That is about 1 of every 5 people in the state of 10 million. Over 5 million live in the Atlanta metro area.

Removing over 200,000 people from the food stamp rolls in a single month by just asking able-bodied people without children to work to receive the benefit says a lot about the need to carefully consider how we structure our social welfare programs.

The money also adds up. The reductions in the numbers of those on food stamps in Georgia from its height in 2014 to where it is today equates to annual savings of $671 million to taxpayers.

Human beings respond to incentives. If you doubt it, look at the chart above one more time.

When we start studying the incentives that drive people, and develop public policy around that reality, the country and world we live in will be a much better place.

When you get it right, it's a SNAP!

Maine and Georgia seem to be on the right track.