President Trump teamed up with Senators Tom Cotton (R-AR) and David Perdue (R-GA) this past week to propose revising the law with respect to who can legally immigrate to the United States of America.

The proposed legislation would move the United States to a "merit based" immigration system and away from the current system that is largely based on family ties.

First, a little context on immigration into the United States that you may not receive on the evening news.

Most of the 1 million that receive "legal permanent residency status" (green cards) get it today because of family relationships. In addition, 50,000 are admitted per year in a Diversity Visa Lottery.

For 2017, 19.3 million people from around the world applied for those coveted 50,000 spots. 156 million have applied over the last 10 years. This represents about half of the population of the United States today.

It should be apparent in looking at these numbers why the United States needs a strong and well-considered immigration policy. It also needs to be well-enforced.


Most of the 1 million immigrants who are accepted into the United States for legal permanent residency every year are low or unskilled workers. This has had the effect of depressing wages in the lower wage classes. All of this puts great pressure on our welfare systems.

The White House wants to establish a new legal immigration system that would favor immigrants who are educated, speak English and have high-paying job offers.

As President Trump explained it, new immigrants must be able to “financially support themselves and their families.”

The proposed legislation would continue to favor immediate family members of United States residents, including spouses and young children. However, it would end prioritization for extended family members and adult children of residents.

As you might expect, the liberal media immediately attacked the proposal as "racist"or "unfair". The most high profile attack was from CNN reporter Jim Acosta who seemed to be particularly upset with the proposal to favor those who speak English.

Acosta accosted (sorry, I couldn't resist using that word here) Trump aide Steven Miller in a briefing about the bill by reading a passage from a poem that is at the base of the Statute of Liberty.

“The Statue of Liberty says, ‘Give me your tired, your poor, your huddled masses yearning to breathe free.’ It doesn’t say anything about speaking English, or being … a computer programmer. Aren’t you trying to change what it means to be an immigrant coming into this country if you’re telling them they have to speak English? Can't people learn how to speak English when they get here?”


It certainly is true that people can learn English when they get here. However, if they cannot speak English they are almost certainly going to be relegated to lower paying jobs in our economy. As a result, they are going to be at greater risk of being on welfare, food stamps or Medicaid. They are also going to depress wages of lower-educated Americans who will also be forced to be more reliant on welfare. It is basic economics.

It is nice poem but the fact is, as Michael Barone points out, "the most tired and poor seldom made it to the United States, because they lacked the money or the heartiness to afford or weather even steerage passage on a trans-Atlantic steamship."

Our immigration laws for most of our history have had strict requirements. Those with communicable disease have been barred as have those who were not literate or did not have a financial guarantor. Anarchists, polygamists and beggars have been ruled ineligible to immigrate into our country.  In fact, the immigration law of 1906 added a knowledge of English as a basic requirement for immigrants. What is being proposed is not new.

The bottom line for almost all of our history has been that immigrants had to be healthy and able to financially support themselves or they were turned away. You can see for yourself what the entrance requirements were in 1903 at Ellis Island here.

Why have an immigration policy at all? The only logical reason is to improve your country by importing human talent that will provide a benefit to the nation. This is the thinking that drove our immigration policy for most of our history. Immigrants with illness or who could not support themselves and their families were turned away. Often this was at Ellis Island after they had already faced an arduous journey here by ship. Those who were willing to work and contribute to our country were welcomed. Others were sent home. Why should it be any different today?

Acosta also does not seem to understand other things as well. He seems to think that speaking English is something that only people from Great Britain or Australia can handle.

“This whole notion … that they have to learn English before they get to the United States, are we just going to bring in people from Great Britain and Australia?” he said.


This is where Steven Miller put one of the best smackdowns of a reporter I have seen of late on Jim Acosta. I guess you could say that Miller accosted Acosta.

“I am shocked at your statement that you think that only people from Great Britain and Australia would know English,” Miller said. “It reveals your cosmopolitan bias to a shocking degree.”


Steven Miller knows of what he speaks. A little English lesson for you that Miller already knows.

All of this information is from The Language Blog, "Which Countries Have The Most English Speakers".

There are 840 million people who speak English in the world.

That means that there are 58 million people in the United States that cannot speak English at all.

In addition, only 70% of the population of the United States uses English as a first language.

Here is a chart showing the countries with the most people who can speak English. 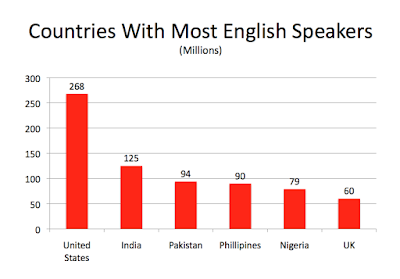 India has twice as many people who can speak English as in the UK.

There are more English speakers in India, Pakistan and the Phillipines than in the United States and UK, combined.

Notice that Australia and New Zealand do not even make the list for countries with the most English speakers.

Of course, speaking English and speaking it well are two different things. (In fact, the English probably do not think we Americans do a particularly good job with it.)

For most people outside of the U.S, U.K., Australia and New Zealand it is only a second language. The proficiency for others is not as polished as it would be as a native tongue.

The countries that have the highest proficiency in English are generally the Scandinavian countries. For example, 90% of those in The Netherlands speak English and their overall proficiency is rated high.

Is it unreasonable to consider the ability to speak English as a factor in our immigration policy?

You should also know that the ability to speak English is already a requirement to become a naturalized United States citizen.

Does it make sense to bring people to this country to be permanent residents who have not already shown a commitment to one of the core requirements for citizenship?

You have the facts.