President Trump drew attention to the opioid crisis today in a briefing in response to a recent report from a Presidential Commission appointed by Trump that deems opioid addiction a "national emergency".

I wrote about the epidemic of drug deaths in the United States last year when I pointed out that the latest data had shown that the age-adjusted mortality rate had actually increased in 2015.

This was a total surprise in a country where medical advances have meant that mortality rates have been routinely dropping for years upon years.

Experts have blamed the massive increase in deaths from overdoses as the reason for the mortality rate increase.You get a sense of why this could occur by looking at this graphic depiction of the increase in drug overdose deaths by county across the United States between 2004 and 2014. 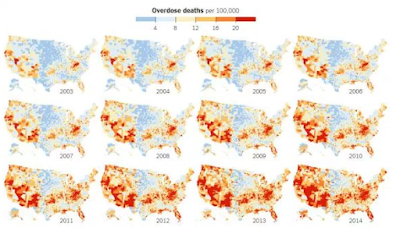 It has only gotten worse since 2014 when this graphic was produced.

A big reason for the increase in drug overdose deaths is due to opioids. I would guess that most people were not even familiar with the term 10 years ago. They might have heard of heroin but were less likely to consider some of the other varieties of opiates that involve prescription drugs ---morphine, OyxContin, Percocet, Vicodin, and fentanyl.

During the Obama Administration we heard a lot about the need to control guns. We did not hear much about controlling drugs. This is despite the fact that overall deaths by guns was not increasing at anything close to the death from drugs. You would never have known it by listening to the President or watching the evening news.

You might be interested to know that the death rate just from opioid overdoses is now almost equal to those from both motor vehicles and guns. However, these death rates are declining or holding steady while drugs overdose deaths have exploded. In other words, the average American is 60% more likely to die from a drug overdose this year than from either a gun or a motor vehicle accident.

It is indeed a national emergency that has gotten scant media attention compared to guns or cars.

I have found it interesting that those arguing that Obamacare should not be repealed are pointing to the opioid crisis as a reason to leave the law alone. They point to the need for Medicaid to treat patients with addictions.

However, Sam Adolphsen of The National Review recently asked the interesting question as to whether the expansion of Medicaid was actually partly responsible for adding to the opioid crisis.

Medicaid hasn’t proven to be the antidote for the opioid epidemic ravaging America, but it just might be adding more poison. Much opposition to the Republican effort to repeal and replace Obamacare has coalesced around a dubious talking point that Medicaid expansion is the best way to fix the opioid crisis.

What if the Medicaid expansion is actually responsible for expanding the opioid problem?

While Medicaid may in some cases provide additional treatment options for an addict who is willing to engage, it also provides a “free” plastic card loaded with unlimited government funds that often increases access to opioids.

Is it just a coincidence that the seven states with the highest drug-overdose death rates (West Virginia, New Hampshire, Kentucky, Ohio, Rhode Island, Pennsylvania, and Massachusetts were also among the 31 states that expanded Medicaid under Obamacare?

In addition, studies conducted by the CDC indicate that prescribing rates for those on Medicaid are twice as high as for those on private insurance.

Have we actually fueled the opioid problem by providing people an easier path to these drugs through a prescription card?

Let's consider my home state of Ohio. Obamacare has been responsible for more than 700,000 adults being added to the Medicaid rolls since 2013.

What would explain such a dramatic increase in just a couple of years?

The sad truth about opioid addiction today is that many are becoming addicted through regularly-prescribed prescriptions. Half of all deaths are due to overdoses of prescribed medications. Others get hooked on prescription opioids and gravitate to street heroin and other opiates.

It is just not young people who are succumbing to these drugs. It is affecting all ages. In fact, the highest rates of drug-induced deaths are for those age 55-64. 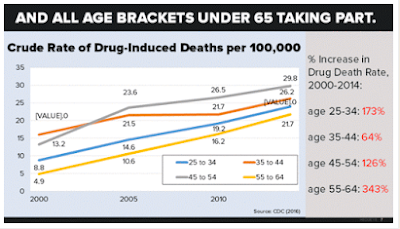 Over the years I have found that most liberal ideas are well meaning and well intentioned. Medicaid expansion is probably one of them.

In a theoretical laboratory these ideas make a lot of sense. I think that is why so many academics are liberal. The ideas make such great sense in the classroom or a textbook.  Unfortunately, in the real world these ideas must face reality.

Are we seeing that effect in the opioid crisis?