In 2013, before the Obamacare Medicaid expansion, there were 72 million people enrolled in the Medicaid program at some point during the year.

The population of the United States is currently 326 million.

That means almost one in four Americans were on Medicaid before it was expanded under Obamacare.

Compare that to other familiar social programs.

There are only 58 million people on Medicare.

That 72 million number before Obamacare took effect has now grown to 98 million in 2017---an increase of 36% in the number of enrollees.

By 2026, the CBO estimates it will be 110 million. That means roughly one out of three Americans will be on Medicaid at some point in time during the year. That would also represent an additional 38 million on Medicaid than before Obamacare expanded eligibility.

Keep this in mind when you hear the CBO state that 23 million would "lose coverage" by 2027 under any of the GOP bills to repeal and replace Obamacare. 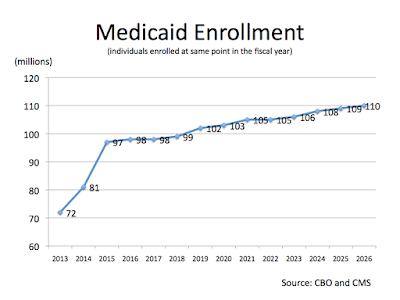 At the time that Obamacare was passed, the CBO projected that 71 million people would be on Medicaid at some point in 2017. Bear in mind, this assumed that all states would expand Medicaid eligibility. The actual number this year---98 million.  And we are supposed to believe the CBO projections on the effect of a repeal and replacement bill?

The sad truth is that Medicaid is eating a large hole into the federal budget as well as the budgets of many states.

Consider my home state of Ohio.

Medicaid payments accounted for 37.7% of all expenditures in the annual Ohio budget for the fiscal 2015 year (the most recent year for which comparisons with other states is available).

That is the highest proportion of all 50 states. These are the 5 states with the highest percentages of their budgets going to Medicaid. The average for all states is now 29%. 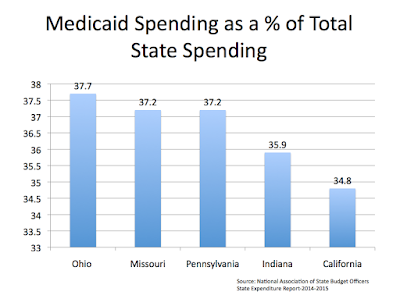 It does make you wonder what Governor John Kasich (a supposed fiscal conservative) was thinking when he circumvented the state legislature and expanded Medicaid in Ohio.

To provide some historical perspective, Ohio was spending just 9.8% of its total budget on Medicaid in 1984-1985.

If you want to know why education, roads, libraries and law enforcement have trouble getting their fair share of state budget dollars today, look no further than increases in Medicaid spending.

Everything else suffers when one item in the budget expands from 9.8% to 37.7% of total state expenditures over 30 years.

Jason Hall in The National Review has an excellent background article on what the Obamacare expansion has done to Ohio and why hospitals around the country are lobbying so hard to keep the Medicaid expansion money flowing their way.

The total cost of Medicaid expansion in Ohio---$400 million every month of taxpayer dollars. That is almost $5 BILLION per year in added costs for just one state because of Obamacare.

Do you hear that giant sucking sound?

Those are your tax dollars going to pay those Medicaid bills.

All of it gives me a migraine and it should give you one as well.

It is unaffordable. It is unsustainable. It is untenable in the effects it is having on other state services.

Most of the attention about Obamacare repeal is on the individual mandate and exchanges. However, Medicaid is a far bigger problem looking to the future.

The current Medicaid framework must be replaced. It is a key piece of the prescription to fix our health care system.

How is it going to get done?