Things That Are True Even If Trump Believes Them

James Damore, the Google engineer who was fired last week for referring to Google in a memo as an "ideological echo chamber" could just as easily have been referring to The New York Times.

The Times has had a particularly bad time in coming to grips with the fact that Donald J. Trump is President of the United States.

To be fair, the New York Times has actually been slightly more positive than the three major tv networks. This is an analysis of positive/negative coverage during Trump's first 100 days by Harvard's Kennedy School.


One of my favorite quotes from election night appeared in the op/ed pages of The New York Times by columnist and noted economist (?) Paul Krugman on the morning after the 2016 when he famously wrote the following.

It really does now look like President Donald J. Trump, and markets are plunging. When might we expect them to recover?

Frankly, I find it hard to care much, even though this is my specialty. The disaster for America and the world has so many aspects that the economic ramifications are way down my list of things to fear.

Still, I guess people want an answer: If the question is when markets will recover, a first-pass answer is never.


This is a chart of the Dow Jones Industrial Average over the last year. That low point on the chart is when Krugman was writing that the markets would never recover. 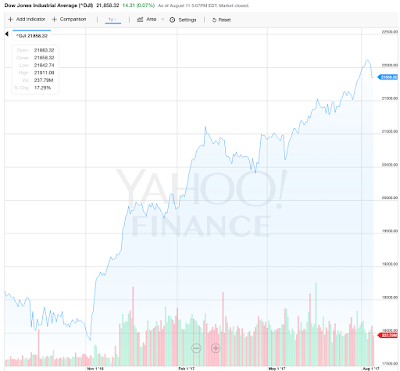 Never is a long time. I don't like to cite stock market averages as scientific data. What goes up can go down. However, nine months later, Krugman could be said to have more than a little egg on his face.

Thomas Friedman is another New York Times columnist who resides within the "ideological echo chamber".  Friedman once said of Trump, "He doesn't behave as an adult, let alone President."

As I have written before, the Democrats, the media elites and  political establishment do not fear President Trump because they believe he will truly make a mess of things. Their real fear is that he will succeed. Nothing would be more damaging to their egos, reputations and view of the world. You need to understand this to understand their true animus toward the man. You should also understand that all of their efforts to destroy Trump are not for you benefit...it is for theirs.

That is why I found it interesting what Tom Friedman wrote a couple of weeks ago in his New York Times column about Trump.

Of course, he started the column by attacking Trump. However, what I found interesting is that if you assumed that in the following passage, "He" was referring to Obama as President, the same would be equally true.

He seems not to have grown a whit in the job. He has surprised only on the downside — never once challenging his own base with new thinking or appearing to be remotely interested in being president of all the people, not just his base.


However, Friedman moves on from there and provides a warning to his liberal friends.

What strikes me most about Trump, though, is how easily he still could become more popular — fast — if he just behaved like a normal leader for a month..

With the Dow at 22,000 and unemployment at 4.3 percent, oh my God, this guy could actually become more popular outside his base without much effort. That’s scary.


Friedman then goes on to explain how well Trump has connected on what he calls the "gut" issues with voters. As he puts it,

Some things are true even if Donald Trump believes them!


What are those things?

• We can’t take in every immigrant who wants to come here; we need, metaphorically speaking, a high wall that assures we Americans can control our border with a big gate that lets as many people in legally as we can effectively absorb as citizens.

• The Muslim world does have a problem with pluralism — gender pluralism, religious pluralism and intellectual pluralism — and suggesting that terrorism has nothing to do with that fact is naïve; countering violent extremism means constructively engaging with Muslim leaders on this issue.

• Americans want a president focused on growing the economic pie, not just redistributing it. We do have a trade problem with China, which has reformed and closed instead of reformed and opened. We have an even bigger problem with automation wiping out middle-skilled work and we need to generate more blue-collar jobs to anchor communities.

• Political correctness on college campuses has run ridiculously riot. Americans want leaders to be comfortable expressing patriotism and love of country when globalization is erasing national identities. America is not perfect, but it is, more often than not, a force for good in the world.


Thomas Friedman seems to have finally figured out why Donald Trump was elected President.

Can we expect that Thomas Friedman will soon be on the Trump Train?

Or is he just hedging his bets?