I doubt that there is anyone who is a bigger snake oil salesman or hypocrite than Al Gore. That is saying something when you consider the competition that exists in Washington, D.C.

Gore has been making dire predictions about the climate for over 25 years. He started claiming that we were on the verge of catastrophic climate change in his book, Earth in the Balance, in 1991.

In 2006 Gore made his catastrophic climate change warnings into a movie, An Inconvenient Truth.

In that film Gore predicted that we had but ten years to get things right on earth or face catastrophe. He stated that our weather would get increasingly warmer. That our climate would become more severe with more hurricanes and tornadoes. And that by the summer of 2015 the Arctic sea would be ice-free.

I debunked all of these predictions with the actual facts in my post "An Inconvenient Truth +10" on the tenth anniversary of the release of the film.

Al Gore is at it again with the release of another movie titled "An Inconvenient Sequel: Truth to Power".  I guess it was time for Gore to once again revise and extend his 10 year warning period for catastrophe to overtake us. 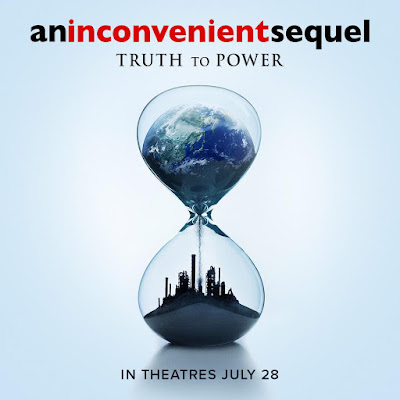 It would be somewhat amusing if not for the hundreds of millions of dollars of wealth that Gore has accumulated as he has peddled his propaganda.

What makes it all the more infuriating is looking at the way Al Gore conducts his personal life. For someone who claims that the world is going to come to an end because of catastrophic human-caused carbon emissions, Gore sure does not do much personally to save the planet.

Al Gore took a lot of heat (sorry, I could not resist) after the release of his movie in 2006 that his home in Nashville, Tennessee consumed 20 times more energy than the average American home.

Gore responded by stating that he was going to extensively remodel his home by installing solar panels and geothermal heating. It appears that he did follow through on these improvements and also invested in other energy savings improvements---new energy efficient windows, a rainwater collection system and a new driveway with rainwater permeable bricks that channel water to the collection system.


The National Center for Public Policy Research estimates that Gore invested at least $250,000 and possibly as much as $500,000 on his energy efficient remodeling effort.

You would think that investing that much money in "green" solutions would mean that Gore's house would now be a model of energy conservation.

I guess you could also say that An Inconvenient Sequel is a good way to also describe the energy consumption at his Nashville home after all of his "green" improvements.

Gore is now using 21.3 times the average homeowner compared to the 20 times he used a decade ago even though he spent upwards of $500,000 on "green" energy solutions that he is urging on everyone else to "save the planet".

By the way, those installed solar panels produce just 5.7% of the annual energy consumption for the house.

I don't think Al Gore ever learned anything about Return on Investment (ROI). Why would he? He is a liberal Democrat.

Here is Al Gore's actual energy usage for the last 12 months on his Nashville home. It is the real truth about power usage at Gore's home. 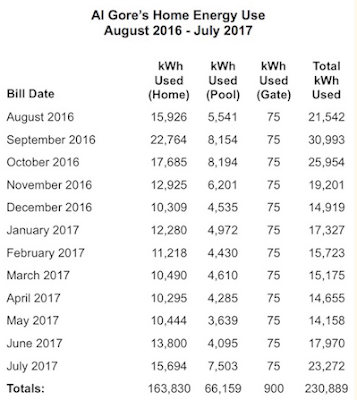 I find it particularly interesting that Gore is using over 66,000 kWh of energy per year to heat his pool. Heating that pool alone requires about 6 times what the average homeowner uses in energy per year.

Don't you think that if you are claiming that the planet is being harmed to such a degree by catastrophic human-caused climate change that you could sacrifice a little yourself by doing without your heated pool?

I cannot state it better than The National Center of Public Policy Research did in the conclusion to its report on Gore's energy usage.

Upon winning the 2007 Nobel Peace Prize, Gore stated, "The only way to solve this [environmental] crisis is for individuals to make changes in their own lives." Judging by his own home electricity consumption, Gore is failing to live up to the standards he expects of everyone else.

And to think that this man came within 537 votes in Florida of becoming President of the United States.

In God We Trust.

Postscript:
It could be that people are finally becoming wise to the ways of Al Gore and his climate change claptrap. It appears that Gore' new movie is bombing at the box office.