I watched President Trump's address on Afghanistan last night and it was encouraging that he is willing to try a new approach in the war in that country---fight to win.

Forget the nation building. Forget telling the enemy your timetable. Forget the restrictive rules of engagement. Forget looking the other way as Pakistan plays us in the war. It is time to play to win.

Afghanistan, is by far, the longest war in America. It is now almost 16 years long. However, I think the description given by Secretary of Mattis to President Trump when advising him on the war to be more accurate.


For perspective, consider the length of these other U.S. wars.


President Trump stated in his speech that his instinct was to get out of Afghanistan. He stated his instincts are usually right. However, he has taken the advice of his advisers after hearing all the facts.

My instincts on Afghanistan match Trump's. I have spoken to those who have fought on the ground in Afghanistan. They have told me that beyond the restrictive rules of engagement the real problem is that the Afghans do not want to fight for their country. The Afghan forces are more likely to run than fight when engaged. Most of their troops are serving not for love of country, but for the pay they receive for wearing the uniform.

Unless this changes, it will be impossible to "win" in Afghanistan. Trump fully understands that by this statement in his speech.

America will work with the Afghan government as long as we see determination and progress. However, our commitment is not unlimited, and our support is not a blank check. The government of Afghanistan must carry their share of the military, political, and economic burden. The American people expect to see real reforms, real progress, and real results. Our patience is not unlimited. We will keep our eyes wide open.


The most refreshing thing I heard in the speech was the President of the United States referring to ISIS rather than ISIL.

We are accustomed to our Presidents showing defiance to our enemies rather than deference. In particular, to enemies as brutal and barbaric as ISIS. Unfortunately, that was not the case with President Obama.

Let's hope a change in attitude from our Commander in Chief can make all the difference in America's longest war.

For context, please read what has been my most read blog post in the almost seven years I have been writing  BeeLine.


You may wonder, as I did, why President Obama and his administration refer to ISIS as ISIL.

As ISIS rose to power in Syria and Iraq over the last year or so, we consistently heard it referred to as ISIS for the Islamic State of Iraq and Syria.

All of a sudden our President started referring to it as ISIL.

I understood where ISIS came from. What does ISIL stand for?

It turns out it is the acronym for the Islamic State of Iraq and the Levant.

What is the Levant?

It is a term used for centuries for the area shown in the map below.  The Levant today consists of the island of Cyprus, Israel, Jordan, Lebanon, Syria, Palestine, and part of southern Turkey. It does not include Iraq. 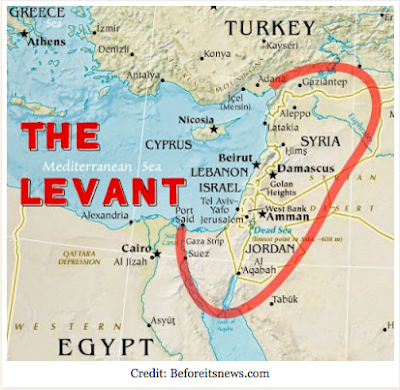 In other words, Obama is effectively giving due recognition to the ambitions and dreams of these extreme Islamists for their caliphate by his use of the term ISIL. Notice also that ISIL includes all of the territory of Israel. ISIS does not.

Consider this perspective from BeforeItsNews.com, which wonders about the President's use of ISIL instead of ISIS.

Now, to us Westerners we don’t really make much of a distinction, do we? No, honestly from our perspective its all about the same. But how would a Muslim living in the Middle East view it? Just what is the Levant anyway? Let’s take a look.

The geographical term LEVANT refers to a multi-nation region in the Middle East. It’s a land bridge between Turkey to the north and Egypt to the south. If you look on a map, however, in the near exact middle of the nations that comprise the Levant, guess what you see? Come on, guess!It’s Israel.


With the exception of Reuters, no news organization was using the term ISIL until President Obama started to use it. However, it seems the ISIL label is being used more in the media thanks to the consistent use of it by our President and his administration. For example, the Associated Press recently started referring to ISIL instead of ISIS. The New York Times, Los Angeles Times and Washington Post still refer to the group as ISIS.

ISIS is a group that has stated,


“I say to America that the Islamic Caliphate has been established and we will not stop."

“We will raise the flag of Allah in the White House."


We are a long way away from when President George Herbert Walker Bush (41) referred to Saddam Hussein leading up to and during the Gulf War as SAD-em rather than Suh-DOM, which was the accepted pronunciation of Hussein's name. Bush clearly did this intentionally to get under Hussein's skin in some way. It should be noted that he stopped pronouncing it this way when the war was over.

There was an ulterior motive. Does Barack Obama have his own motive in using ISIL, rather than ISIS?

Those who are regular readers of BeeLine know that I am not a conspiracy theorist. I draw my conclusions based on facts and analysis of those facts. However, in this case, it really does make you wonder what Obama is doing, doesn't it?
Posted by BeeLine at 8:51 AM