One of the critical functions of government  is to "insure domestic tranquility".  It is in the preamble of the U.S. Constitution. Most historians trace the roots of this important governmental role to concern by the Founders on what they had witnessed in "Shay's Rebellion" that transpired shortly before they convened to draft the Constitution.

Shay's Rebellion involved men who took up arms to protest conditions in the country after the Revolutionary War. They tried to take justice into their own hands. The vehemence and violence that occurred had a profound impact on our Founders as they gathered shortly thereafter to draft the Constitution. Insuring "domestic tranquility" became a key reason for a strong national government.

Shay's Rebellion was also the catalyst to bring George Washington back into public service after his retirement as the leader of the Revolutionary Army.  The Rebellion convinced him to return to public service and work for a strong federal constitution to replace the Articles of Confederation. In fact, Washington had no patience for trying to influence or appease protestors who exercised violence. He wanted "a government by which our lives, liberties and properties will be secured" to insure that such tumults would not be allowed to occur in the future.

Our constitution that was created in the aftermath of that civil unrest had as its primary purpose the protection of our liberty.

However, as James Madison explained so well in speaking of the protection of our liberty,


This is useful perspective to have as we see what has unfolded in the actions of extremist groups on the left and right recently.

People have the right to exercise their free speech and to peaceably assemble. However, they do not have the right to occupy parks, take over streets, disobey municipal ordinances and disrupt the lives of other citizens.

They do not have the right to walk down a street carrying a torch spewing hateful speech.

They do not have the right to shout down speakers that they do not agree with at public meetings or gatherings.

They do not have the right to intimidate and threaten other people with clubs and bats in their hands.

They do not have the right to enter public property and tear down statues and monuments with which they do not agree.

They do not have the right to take justice into their own hands no matter how abhorrent or obnoxious those that they oppose may be.

President Trump is taking an enormous amount of criticism for remarks he made in the aftermath of the violence and death of a protestor in Charlottesville, Virginia over the weekend.

There seem to be three main complaints about his actions.

If there is one thing we know about Donald Trump by now is that he is not the most artful speaker of the English language. He is also someone who does not hem and haw. He does not spend an eternity thinking through every word he utters before he speaks. He does not spend time with flourish and fine points. He tells it like he sees it. It is one of the reasons he got elected. Compare and contrast Donald Trump's speaking style with Barack Obama. Trump probably gets out twice as many words in a minute as Obama did.

However, with all that being said, I have a hard time distinguishing any substantive difference in what Trump said related to Charlottesville compared to what Obama did regarding the Black Lives Matter protests that ended in so much violence.

Did Obama forcefully condemn BLM in any stronger terms than Trump did the white supremacists? If he did, I cannot find any evidence of it.

Did Obama blame police actions for causing the BLM protests (effectively blaming "both sides") and excusing the street violence that resulted? Yes.

Did Obama go out of his way to not antagonize the BLM movement and its leaders Yes. He actually invited some of the leaders to The White House.

The big difference in all of this is that Obama got a pass from the media and the political establishment on everything he did. Donald Trump has not. You could call it a double standard but that gets nowhere close to the dimensions of the animus towards Donald Trump.

It is easy to say that Trump should walk, talk and tweet more softly knowing this reality. I am not sure that it would make much difference. A substantial number of Americans (and almost all of the media) do not want Donald Trump as their President.

The irony is that Donald Trump could never have been elected President but for the eight years of Barack Obama.

He would not have been elected if the illegal and unlawful Occupy Wall Street protests had not occurred and were allowed to take over our public parks.

He would not have been elected if the Black Lives Matter movement had not fomented so much violence and hate on the streets and against law enforcement in this country.

He would not have been elected had Barack Obama not worked so hard to create division and dissension in so many areas of American life.

At their core, most Americans, like George Washington, want a government that does not take sides, does not excuse violence and which secures our lives, liberty and property. They observed what was happening over the last eight years and did not like the direction of our country. I know that Democrats and liberals do not believe that to be true. However, facts are facts. Look no further than the votes of the American people for President, the turnover of the Senate, House and what has occurred with state and local offices. How else do you explain it?

I wrote about the Occupy Wall Street protests after I visited Zuccotti Park in lower Manhattan back in 2011 and warned about its implications. It was a first-hand look at an abuse of liberty for which the Obama administration and local authorities looked the other way.

We have real problems in this country.  If these are the people who are going to lead us to greater promise we are in far deeper trouble than we are already.

What is most troubling is the free pass that has been given to this group.  They have taken over what is privately owned property (although it is available to the public) in blatant disregard of individual property rights.  They have shown little respect for the people who live and have businesses in the area.

Would these actions have been tolerated if this was an openly Communist group?  The Ku Klux Klan?  New Nazi Party?  The Tea Party?  I think not.


Six years later and what do we have? White Supremacists and New Nazis who think they should have the same rights to protest, use vile language and seek media exposure in the way the Occupiers and BLM did. Of course, that has led to radical leftists believing they have that right to confront them. In these situations in doesn't take much for violence to ensue. We saw that in Charlottesville as we have elsewhere the last few years.


When two sides are looking for a fight they will usually find it.

Trump was right to condemn both sides.

He should make it clear that those that incite, foment or take part in violence will be dealt with harshly--alt right, alt left or alt middle.

Trump should make it clear that he is motivated by only one thing---the oath he took to "preserve, protect and defend the Constitution of the United States of America".  His responsibilities are well defined. 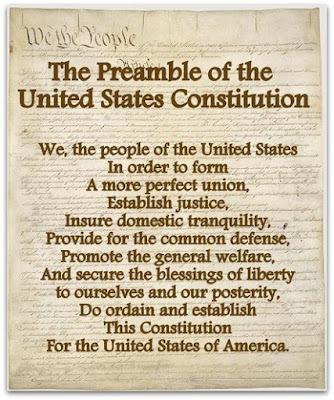 It is high time that we start insuring domestic tranquility and hold people to account who choose to abuse our liberty.
Posted by BeeLine at 7:00 PM