Rain--Too Much and Too Little

All of our thoughts and prayers right now are with the 7 million people in and around Houston, Texas that are dealing with the deluge and floods resulting from Hurricane Harvey.

This catastrophe hits particularly close to home as my daughter lived in Houston until six weeks ago. This is a picture that was taken by a friend of hers on Sunday morning. The water continued to rise throughout the day as the rain continued. This morning my daughter saw on Facebook that another person on that street was requesting a boat to evacuate their family of seven as 2 feet of water had inundated their house. This is about six blocks from my daughter's former home. 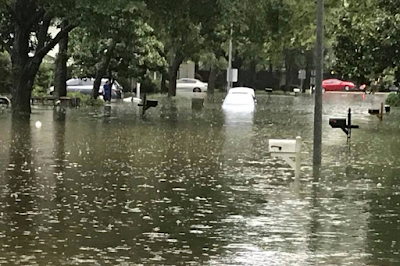 Fortunately, the last reports we have is that the houses on her former street are still dry.

Houston faces a long recovery period and it is certain there will be many who will ask how this could happen. Most certainly there will be those who blame this extreme weather on human-caused "climate change".

What they will fail to mention is that this is the first category 3 hurricane to strike the United States in almost 12 years. That is the longest period without a hurricane striking the continental U.S. since data began being recorded in 1851.

As bad as this catastrophe is, and as difficult as the recovery will be from this deluge of rain, it will likely pale in comparison to the human suffering and dislocation that resulted from the lack of rain in the Southern Plains 80 years ago.

This is how History.com describes the Dust Bowl.

The Dust Bowl refers to the drought-stricken Southern Plains region of the United States, which suffered severe dust storms during a dry period in the 1930s. As high winds and choking dust swept the region from Texas to Nebraska, people and livestock were killed and crops failed across the entire region. The Dust Bowl intensified the crushing economic impacts of the Great Depression and drove many farming families on a desperate migration in search of work and better living conditions. It had a devastating effect on the Southern Plains region of the United States. 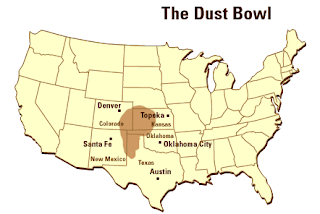 2.5 million people in the area were forced to permanently move. To put that number in context, the entire population of the United States then was about 125 million at the time. It was the largest migration in American history.

100 million acres of farmland were rendered unusable for agriculture. That is roughly the total size of the entire state of California.

What caused the Dust Bowl?

First and foremost it was caused by a shift in regional weather patterns. You can see that clearly in this graph that charts annual precipitation amounts in Oklahoma for the last 120 years. Notice the deep and sustained drought that lasted the entire decade of the 1930's. 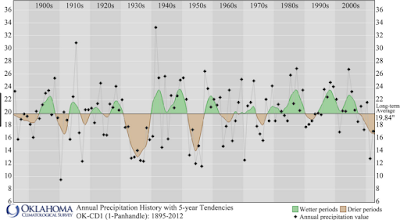 Compounding the problem were poor agricultural methods and federal policies that encouraged too much prairie grass land to be tilled for crops. With sufficient moisture these lands could grow wheat. However, when the drought came, and with no prairie grass to hold the soil in place, the winds in the plains turned the eroding soil into massive dust storms.

Similarly, the disaster in Houston has been compounded by too much development, too much concrete and other hard surfaces that have replaced prairie lands that used to absorb the water. That water now runs off and is channeled into tighter and tighter areas where flood potential is high.

Those Dust Bowl storms did not just stop at the border of Oklahoma. The top soil blew all the way to the East Coast of the United States.

On May 11, 1934, a massive dust storm two miles high traveled 2,000 miles to the East Coast, blotting out monuments such as the Statue of Liberty and the U.S. Capitol.

The worst dust storm occurred on April 14, 1935. News reports called the event Black Sunday. A wall of blowing sand and dust started in the Oklahoma Panhandle and spread east. As many as three million tons of topsoil are estimated to have blown off the Great Plains during Black Sunday.


What struck me as I read the history of the Dust Bowl period is how such events would be reported today if such a calamity occurred.

Think about it again.

All because of drought.

Do you think something like this today would be blamed on a bad run of weather?

Of course not. This would be cited as Exhibit A as proof of man-made climate change. Or proof that fracking in Oklahoma caused the drought.

Carbon taxes would be levied. Oil and coal would likely be outlawed. Gigantic sums would be spent on "green" technologies. All in the name of saving Oklahoma and the planet.

However, look at the chart above one more time.

Wet periods were followed dry periods ever few years in the 40 years leading up to the 1930's.  There was then the extended drought lasting 10 years. It was followed by 10 years of above average moisture and another 10 year dry period in the 1950's. If anything, the period since has resulted in fewer extremes---especially on the dry side.

What does this tell me about climate change?

Yes, it is always changing. Temperatures have risen and fallen. Precipitation has fallen and risen. And all of it has been happening well before anyone had ever heard of a carbon footprint.

What would the reaction be when the rain started falling again in the Dust Bowl?

"Rain has returned to the Plains states. Our concerted actions against man-made climate change has saved the world!"

They would be wrong.

Who did people thank after the Dust Bowl ended?

He is in control.

May He bless the people of Houston and its environs in this time of need.
Posted by BeeLine at 10:29 AM