A Lot of Garbage

It is truly mind boggling how very little Alexandria Ocasio-Cortez knows or understands about anything.

What is even more mind boggling is that she has millions of acolytes who hang on her every word and believe she knows what she is talking about.

Last week she was on her Instagram account saying she didn't know what a garbage disposal is. This is a 29-year old woman who was elected to Congress?

OK everyone, I need your help because I just moved into this apartment a few months ago. And I just flipped a switch and it made that noise and it scared the daylights out of me.

“This DC apartment is bougie and has things I’ve never seen before. Is this what social mobility is? Using kitchen appliances you never saw growing up?”


Of course, she went on to ask whether this contraption was "environmentally responsible". I guess she is looking for other things to ban in her Green New Deal. (By the way, garbage disposals are generally favored by environmentalists for the food waste that they prevent from ending up in landfills.) 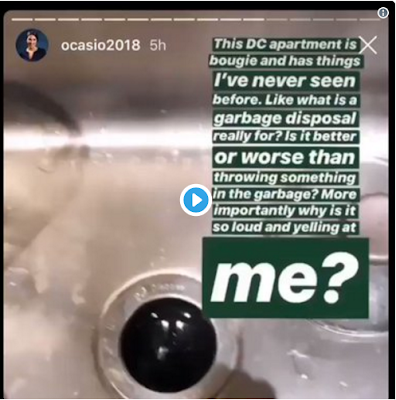 Perhaps she never had a garbage disposal when she was growing up but she didn't even know it existed and what it did? Talk about living under a rock.

You would think that saying something that crazy might slow her down. However, AOC was showing her utter lack of knowledge later in the week arguing that the GOP was causing the Post Office to fail because the law requires the US Postal Service to fund their retiree promises to its employees. She seems to think that the USPS should not have to accrue retiree costs as they are incurred.

Note that this inane tweet got 9,500 retweets and over 50,000 likes. That is not only mind boggling, it is downright scary at the same time. 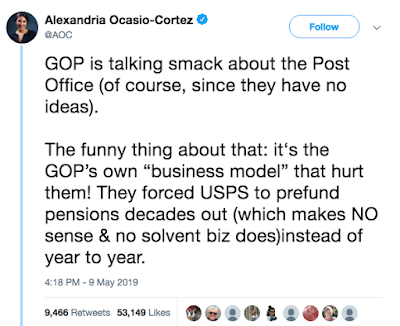 Despite what AOC says, prefunding pensions decades out is what prudent businesses do. As employees perform the work that will eventually result in a future pension the employer should be putting money aside for that future obligation currently. It is not prudent to put this expense on the business in the future. In fact, accounting principles dictate it and private businesses are required to do it based on the Employee Retirement Security Income Act (ERISA) of 1974. It is a "worker protection" law. Isn't AOC concerned about protecting workers?

The GOP "business model" that AOC seems to be referring to is a 2006 law that requires the USPS to fund their gigantic retiree health obligation which is a separate obligation from pensions. Again, private business have been required to accrue these costs since Financial Accounting Standard 106 was issued in 1990. FAS 106 requires that post-retirement benefits be accrued as an expense during the years that the employee earned the benefit rather than accounted for on a pay-as-you-go cash  basis during retirement.

The fact is, that the USPS like many government entities, ignored this fundamental accounting principle for many years. As a result, they did not properly account for current expenses and kicked the can down the road. You can see this readily by looking at the funding levels of most governmental pension and retiree programs today. Taxpayers are currently on the hook for over $6 trillion in state and local government pension plans according to a recent study by the American Legislative Exchange Council.

The reality is that what has really hurt the USPS is email, electronic bill payments and more and more businesses advertising through social media than using direct mail or advertising circulars. It was not the Republican party "business model" or an accounting provision that has done it.

Look no further than the fact that the USPS is handling about 30% less mail pieces today than it was a decade ago as explained in this article on the USPS's financial condition. 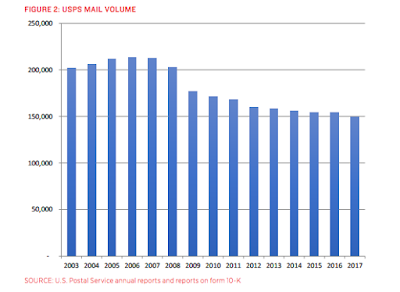 79% of the annual costs of the USPS are in labor and benefit costs. The USPS has responded to the decrease in mail volume through attrition by not replacing employees who have retired or left. (It would be unheard of for a government entity to actually layoff workers). This has resulted in a reduction in employment from 800,000 a few decades ago to 500,000 today. However, the USPS now has 600,000 retirees receiving a pension and retiree health benefits.

The pensions and health care benefits for those retirees (and future retirees) are currently underfunded by over $100 billion. If the 2006 change in the law had not occurred, the amount underfunded would be close to $150 billion. AOC thinks this would be a better business model?

You can also see in the chart below that, contrary to what AOC wants people to believe, the USPS has been running a loss (or is barely above break-even) even if retiree health expenses are excluded from its profit and loss statements. 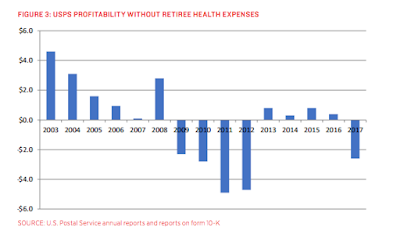 It solves nothing to think you can ignore the obvious as AOC suggests. There are 600,000 retirees today and that number will undoubtedly grow as the USPS has to further shrink its workforce. What good does it do to just kick the can further down the road and allow the USPS to get further in the red when only massive future postage increases or a large federal government bailout of its retiree obligations can save it?

On her Instagram post AOC also said this about her garbage disposal. (You can see it yourself.)

"...It is terrifying. I don't know what to use it for or what its purpose is."

My answer to AOC would be this.

A garbage disposal would be very useful for you to use to deposit your policy proposals and other random statements you are prone to make on how the world works.

You simply have no clue about what you are talking about most of the time. What you say is not only dishonest but dangerous to those who believe your garbage,

Please be courteous and dispose of this garbage properly. By doing this you will also stop spreading this garbage to others.

You also will have the added comfort of knowing that it has been disposed of in an environmentally sensitive manner.