Eyes On Your Eats

The weekend is coming up and I would wager that there is a good chance that a few of you are going to eat out at some point in the next few days.

If you tell me where you live I would also have a better than average chance of guessing what type of restaurant you might eat at.

How would I be able to do this?

Google recently did an aggregated, anonymized data set based of all users who had opted to use Google Location History to show what types of restaurants people had eaten in different locales around the United States.

Yes, Google knows all the answers.

Here is the national map that The Pudding put together from the dataset. 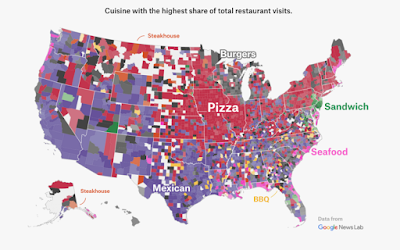 Who knew that pizza had such a stranglehold in the heart of the Midwest?

Sandwiches seem to be the king only in the area radiating out from the Philly Cheese Steak capital in Philadelphia.

Steakhouses only seem to be packing them in where men are men---Montana, Wyoming and Alaska.

There is little doubt that those in Wisconsin like those butter burgers.

The data set also allows you to see just how popular each restaurant cuisine is by region. 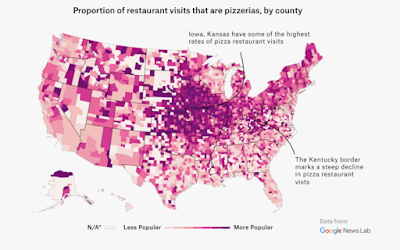 Compare that to the BBQ popularity map. 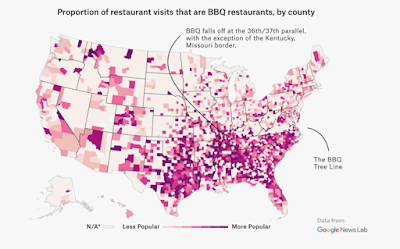 The Mexican map. I am talking about Mexican food, not the number of illegal immigrants from Mexico. However, there is probably a pretty strong correlation between the two.. 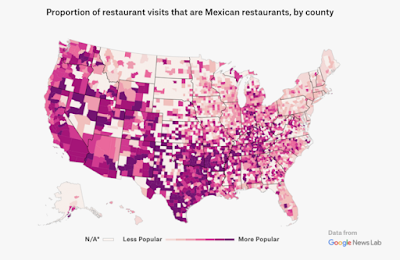 How about the coffee map? What is it about the West and coffee? 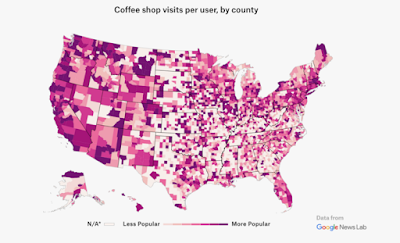 Google also provided the top 10 metro areas for each cuisine type. It should be no surprise that Memphis is #1 for BBQ, San Antonio for Mexican or Seattle for Coffee. However, Detroit is #1 for Pizza and Washington, DC is the Burger Capital of the United States? 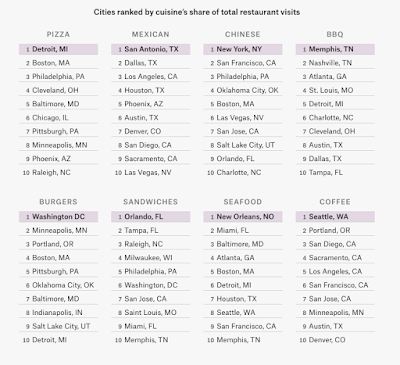 Google's dataset actually can drill down to restaurant visits by neighborhood.

Here is the neighborhood view for Washington, DC. You can see all those burgers being consumed in the heart of DC near The White House and Capitol Hill. You only see pizza, seafood and Chinese becoming more popular in the outskirts of the District.

Where do all the lobbyists wine and dine our legislators? Five Guys? 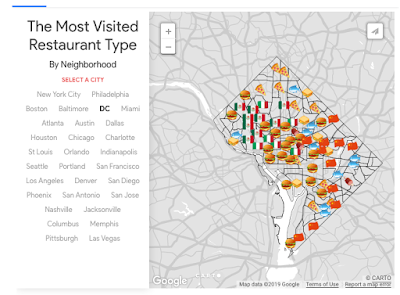