Now that the Mueller Report has cleared Donald Trump of any collusion with Russia in the 2016 election the Democrats seemingly have changed their tune. Mueller was everything for them before his report came out. Now they seem to think he missed something.

Mueller spent almost two years and over $35 million investigating what the Democrats and mainstream media said was collusion with the Russians. The Democrats and media also claimed that Trump had attempted to obstruct justice over his alleged "crimes".

Over those two years Special Counsel Mueller employed 19 lawyers who were supported by a team of 40 FBI agents, intelligence analysts, forensic accountants and other professional staff.

Mueller and his team issued more than 2,800 subpoenas, executed nearly 500 search warrants, obtained more than 230 orders for communication records, made 13 requests for foreign government for evidence, and interviewed 500 witnesses.

Nothing was found by Mueller to warrant any charges against Trump in that two year investigation.

It should be remembered that for two years Trump vociferously denied all the charges. For this he was called a liar, a reprobate and unworthy of the office by both Democrats and the mainstream media.

Has anyone heard any apologies because they got it so wrong?

We have not only not heard any apologies but the Democrats are now saying that Trump is engaged in a "cover up."

This all seems to stem from the fact that Trump refuses to release his tax returns to Congress and he has invoked executive privilege to prevent his former White House Counsel (who already testified for over 30 hours with Mueller) from appearing before a Congressional hearing.

The Democrats claim that they need to see Trump's tax returns in order to see if he had any financial dealings with the Russians that resulted in collusion.

I find this interesting because just last week President Trump filed an 88 page financial disclosure as is required for all federal executive branch officeholders. Most anything that the Democrats say they want to know about Trump can be found in that document. 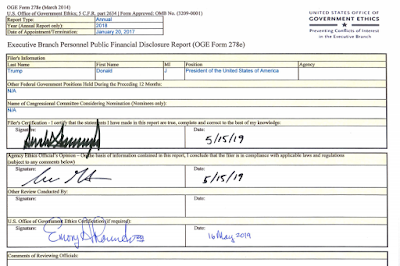 While it is true that a tax return can be helpful in discerning some details better than a financial disclosure statement, I generally believe that the latter is more revealing than the former for someone like Trump. This is the case because a tax return only documents personal income and deductible expenses. For example, if an asset is not producing any current income it never would show up on a tax return. A debt would not be disclosed unless interest was paid and deducted on the return.

Trump's personal tax returns would also be very limited in understanding his entire financial picture. They would only provide details related to his specific individual items and any sole proprietor income. They would not provide any detail on income, expenses or debt on those things held in partnerships, limited liability companies or corporations. The financial disclosure is much more informative for someone like Trump who has significant and wide ranging business interests.

So how is it that the Democrats are claiming "cover up" in the same week that Trump filed an 88 page financial disclosure form?

I think you can figure out the answer to that question.

As to the financial disclosure, here is the page relating to all of Trump's liabilities. It reflects outstanding debt of at least $315 million. 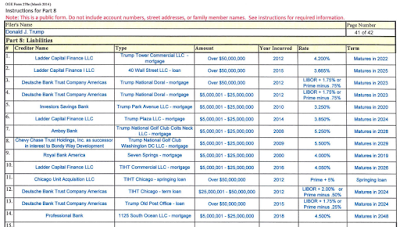 I would put the entire Trump income and asset schedule in here as well but they take up 18 pages in the report. This is the first page of that section of the financial disclosure. Note the disclosure shows both estimated value and annual income of all assets within a range. A tax return would generally only reflect income. 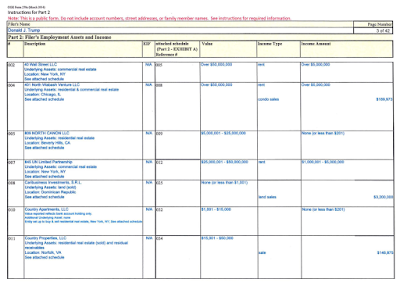 There are an additional 7 pages related to other assets and income which relate primarily to checking, savings, money market accounts and stock investments. Again, these list values and income.

This is the first page of that schedule. 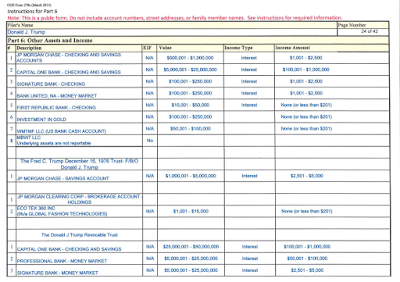 One of the more interesting items I found in the financial disclosure is that Trump is receiving pension payments from the Screen Actors Guild and the American Federation of Television and Radio Artists. These combine for almost $100,000 in annual payments.

You might think that his membership in these two unions was tied to the beginning of his role in The Apprentice which began in 2008.

However, he actually began participating in these plans in 1992 and 1989, respectively, as shown in Part 3 of the financial disclosure.

Trump is credited with 22 acting roles on imdb.com dating back to 1989. 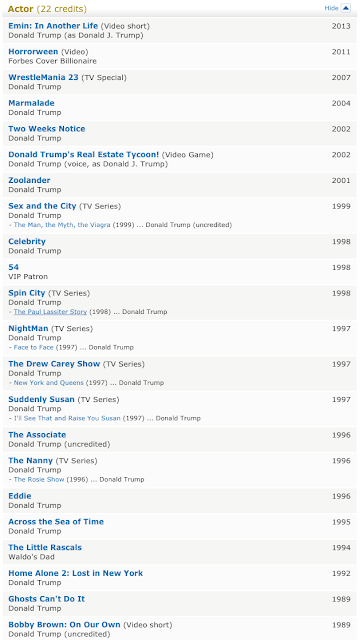 Will there ever be a time when enough is enough with the Democrats in Congress?

They had a special counsel investigating Trump for two years who found nothing on Russia collusion or anything else and the Democrats then conclude that Trump must be covering something up?

A recent poll by CBS News found that by a 58%/37% margin Americans say they have heard enough about Mueller and Trump. 53% of those surveyed want Democrats to drop the investigations of Trump and move on to other issues.

However, among Democrats, 73% want Congressional Democrats to keep investigating. Democrats in Congress have to decide between angering their base or further frustrating the rest of America with their endless investigations of Trump while doing no legislating. That is why Trump is now referring to them as the "Do Nothing" party.

Incredibly, the percentage of Democrats who want to continue investigating Trump is higher today among Democrats than it was before the Mueller report was completed and cleared Trump and his campaign of any Russian collusion whatsoever.

How is that possible if not for Congressional Democrats and a complicit mainstream media who fed the false Russia collusion narrative to their base for two years and now can't find a way to retreat graciously. They seem to think they have no choice but to double down and maintain the support of their base. Democrats also seem to be pushing for more investigations of Trump to deflect attention from the Justice Department investigations of those who promoted (and possibly even created) the Russian collusion smear to drive Trump from office. (the so-called "insurance policy").

Unfortunately, all is proceeding as I predicted in October, 2018 shortly before the mid-term elections.

I made two predictions of what would occur if the Democrats captured a majority of seats in the House of the Representatives in my post "A Consequential Election" that appear to have proven accurate.

The first was that we would see almost nothing done legislatively for two years because all the Democrats would want to do were endless investigations of Trump.

If we think we see chaos in Washington now, think for a second what things will look like with a Democrat Congress.

I can assure you that there will be almost nothing of value done legislatively for the next two years with the Democrats in control.

Will we get a Congress focused on legislation or on investigations?


The second prediction was that a Democrat takeover of Congress would embolden Democrats to pursue a much more radical and progressive agenda. That would also carryover to the candidates who would announce they were running for President in 2020. We should expect much more radical views from the candidates as well if Democrats took over Congress. That is exactly what we have seen. The Democrats believe the country has turned hard left because of their gains in Congress and the social media attention Alexandria Ocasio-Cortez has received.

The consequences of this election will also go far in shaping the list of potential 2018 Presidential contenders.

Will we get a radical or a realist as the Democrat Presidential nominee in 2020?


It remains to be seen whether this is a correct reading of the electorate.

Democrats have been very good in the past at "covering up" their own views in order to get elected. For example, they would say they were personally against abortion but they believed women should have the choice. They would never say they wanted to raise your taxes or take away your private healthcare. They would never tell you they wanted to double the price of gasoline or triple your utility bills.

Of course, that it exactly what they wanted to do. They just knew they could not get elected saying it.

Those days are gone. There is no "cover up" involving what most Democrat candidates want to do and how far left their views are any more. It is all out there for everyone to see.

Will this result in the end of Trump or the end of the Democrat party as we know it?

We will learn a lot about these questions over the next 18 months.

There is no question that the Democrats are obsessed with finding a way to get rid of Donald Trump. However, they could actually die as a national party as they attempt to do it. Such are the risks of doubling down.