Many members of the younger generation today seem to be intrigued with socialism or communism.

Those approval numbers drop dramatically for older generations as you can see from the chart below. Could this be because those that are older saw the horrors and human toll of the socialist and communist states of Russia, East Germany, China, North Korea and Cuba in much more graphic detail in the 1950's, 1960's and 1970's while they were coming of age? 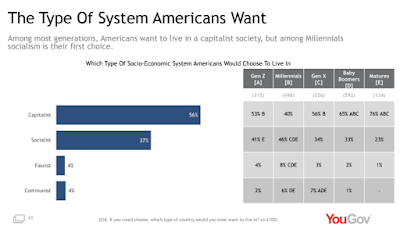 I also find it interesting that those in Gen Z (those born between 1995-2015) have more negative views about socialism, communism and fascism than their older brothers and sisters. Could this be because the college indoctrination process by left-wing faculty has not yet been completed on this generation?

When I was growing up it would be extremely rare for any member of my generation to express socialist or communist views. The red threat was real and people took it seriously. Identifying as a communist or socialist or voting for a Communist party candidate was way, way out there. Someone who did it was on the furthest reaches of radicalism in that day and age. Young people my age might have protested the Vietnam War but almost none embraced communism.

I have known for a long time that former CIA Director John Brennan admitted that he voted for the Communist Party candidate Gus Hall for President of the United States when he was in college in 1976.

John Brennan is also the same guy who converted to Islam after he was young CIA analyst.

It always amazed me that Brennan could have a top secret security clearance and get the CIA's top job with his background.

What I did not know until recently is that former FBI Director James Comey also admitted he was a communist in his college years as reported in this New York magazine article from 2003. If he was joking it certainly is not apparent in the article.

“In college, I was left of center, and through a gradual process I found myself more comfortable with a lot of the ideas and approaches the Republicans were using.” He voted for Carter in 1980, but in ’84, “I voted for Reagan—I’d moved from Communist to whatever I am now. I’m not even sure how to characterize myself politically. Maybe at some point, I’ll have to figure it out.”


You have to ask the same questions about James Comey. How did he ever become Director of the FBI with that in his background?


Is it not pretty extraordinary that two men who grew up in the same era as I did were infatuated with communism in their college years (which was extremely rare in those years) and both ascended to the top national security and law enforcement functions in the United States?

Is it not also extraordinary that both were appointed to these top jobs by Barack Obama?

Is it also just a coincidence (not to also mention extraordinary) that Brennan and Comey appear to have been at the center of the efforts of the FBI and CIA to spy on Donald Trump's campaign and at the forefront of pushing the discredited Russia collusion narrative from the beginning.

Of course, what is more extraordinary is that two guys who seemingly were enraptured with the communist ideals of Russia in the 1970's were the ringleaders trying to smear Trump of colluding with Russia today.

Now that the spying and smears that were directed at Trump and his campaign are coming to light, it appears that Brennan and Comey are are pointing fingers at each other as this FoxNews.com article headline points out.

The launch of a formal inquiry into the origins of the Russia investigation -- being led by one of the Justice Department’s toughest prosecutors -- has touched off a new round of behind-the-scenes finger-pointing among Obama administration officials who could have some explaining to do about efforts to surveil the Trump campaign.

A key dispute that flared this week concerns whether then-FBI Director James Comey or then-CIA Director John Brennan  -- or both of them -- pushed the unverified Steele dossier containing claims about President Trump and his relationship to Russia. The dossier’s more sensational claims were never substantiated by Special Counsel Robert Mueller's team.


All of it is quite extraordinary...and laden with a lot of coincidences.

It will be very, very interesting to see how this plays out.

As a wise friend of mine used to say to me often,

"There is such a thing as coincidence in the world, it just is extraordinarily rare."