There is no better way to do that than with a few examples involving the abortion issue. As I have written before, there is no more emotional, contentious and divisive issue in America today. Much of it was avoidable if we had let the constitutional process play out as our Founders intended our system of governance to work. In that we circumvented that process we now find ourselves with some states now stating that abortion is legal up to and through birth. Others are stating that it is illegal in almost all cases, including incest and rape.

All of this has occurred because we let nine judges decide a fundamental issue balancing the right to life of an unborn child with the rights of a mother to choose whether she wants carry and care for that child.

In that nine judges decided the initial case, nine judges can decide it a different way. This has led those favoring abortion in some states to move to the most radical positions they can think of on the premise that a federal right to abortion could be limited by the Supreme Court. At the same time, pro-life interests in other states have reacted to this abortion expansion by passing legislation that extensively restricts abortions in their states.

Let's look at the "reporting" of this issue in the media for any signs of bias.

Let's start with NPR. Yes, the NPR that is taxpayer-supported and should absolutely not be showing any bias in its reporting.

The Washington Examiner's Quin Hillyer reports that "NPRs coverage of abortion is pregnant with bias."

It seems that NPR recently sent out a memo to all of its reporters and correspondents on how to refer to various terms in the abortion debate. It claimed it was seeking to remain "neutral" in its reporting. You can be the judge of that.

Here are a few examples.

NPR reports are never to refer to babies in the womb. They are to be referred to as a fetus as "babies are not babies until they are born".

NPR reports are not to use the term "unborn" because it implies there is a baby inside the womb rather than a fetus.

NPR reports are not to use the term "abortion clinics" to describe where abortions are performed. They are to be referred to as "medical or health clinics that perform abortions".

NPR is not to use the term "partial birth abortion" to describe the procedure where the baby is partially delivered outside the womb before its skull contents are vacuumed out while still in the mother. This is to be referred to as an "intact dilation and extraction medical procedure".

NPR is also not to use the term "late term abortion" as it conveys that the fetus is viable.

I thought the suggested usage on the last item is particularly telling. NPR is claiming to be neutral but is claiming that abortion is a right. Moreover, there are good guys advocating for that "right" and bad guys opposing" that "right".  Of course, there is no mention of any rights of the developing human being inside the womb. How is that neutral? I can think of no better example of inherent bias. It appears that they can't even see bias when it is right in front of them.

Not to be undone, The New York Times published this op-ed by a doctor who specializes in performing abortions late in pregnancy. 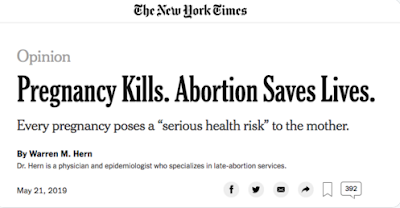 There is no doubt that women do die every year due to pregnancy-related deaths. How many are there?

The CDC reports there are about 700 deaths per year as a result of pregnancy or delivery complications.

The CDC preliminary report for 2018 states there were 3.8 million births last year.

That puts the incidence of a pregnancy-related death at .0018421053 based on the number of live births.

Contrast this with the fact that there were an estimated 879,000 abortions in the United States in 2017 (the most recent year that data is available).

This would mean there were actually around 4.7 million pregnancies when you add these numbers to the live births above and the 24,000 still births we have in a typical year.

Let's put deaths from pregnancy and abortions in context.

On the other hand, almost one in five pregnancies ends with an abortion.  19%

Abortion is justified because it save lives? What is the greater threat to life?

The "health of the mother" is the principal argument that many make for the justification for abortion as seen in the New York Times op-ed.

Rape, incest and a serious fetal abnormality are also often given as reasons to justify abortions.

How often are these actually a reason for an abortion?

The State of Florida records a reason for every abortion performed in the state. These are the results for the 70,083 that were performed in 2018.


These numbers closely track a national survey that was done in 2016 by Wm. Robert Johnston.


All of this should show what is really true.

Abortion is really not about the life or health of the mother. It is not about rape, incest or fetal health.

It is really about one question.

Does a woman have the right to put her rights above the right of the life growing within her?

If so, is there a point at which those rights end and the right to life of her baby take precedence?

Tough questions involving a very tough issue. It always is when you start balancing "rights".

Just make sure you understand the bias inherent in much of what you see and read on the issue.

You also need to understand the facts behind the issue and be able to put those facts in the proper context.

As I have stated in the past, the balancing of those "rights" is not an issue for any one man or woman to decide. Or nine men and women on the Supreme Court. Or NPR, The New York Times or the National Right to Life Committee for that matter.

It should only be decided by a true consensus of the governed. That appears to be what is occurring now at the state level with New York seeing a woman's rights continuing up to and through birth and Alabama seeing the child's rights beginning when its heartbeat is heard.

In that we did not follow the federal constitutional process that was established for this type of issue we now find ourselves in the place we are today.

After 46 years would you not expect it to be a better place?

The Founders did everything in their power to keep us from getting to this place. Such is the result when you try to short-circuit and short change our constitutional process.
Posted by BeeLine at 8:14 PM