If there is one thing that is true in politics is that people vote their pocketbooks before anything else.

People care about what goes in their wallet---and what is taken out of it.

Whether you like Donald Trump or not, the economy and the effects it has on individual American voters, will undoubtedly be the biggest factor in whether Trump is re-elected or not.

For example, look at the historical record of Presidential elections over the last 100 years when an incumbent was running for re-election. 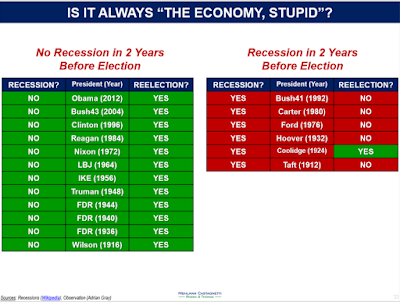 Current economic indicators and the power of incumbency are why three modelers recently predicted that President Trump will win re-election in 2020.

Steven Rattner, a former appointee in the Obama administration, recently wrote a column in The New York Times pointing to the models.

Ray Fair of Yale favors Trump to win based on a model that combines incumbency and gross domestic product growth rates.

Mark Zandi, Moody’s Analytics’s chief economist, has also said Trump is poised to win based on an analysis of 12 models, while Donald Luskin of Trend Macrolytics made a similar prediction based on an Electoral College analysis.


Rattner concedes the numbers are in Trump's favor but wonders whether Trump can overcome the poor perception that many voters have of him.

Other political observers also concede the great economy right now but say that economy is not treating people equally based on region of the country, race, ethnicity or income class.

This seems to be a popular Democrat talking point but is it true?

This chart from The Pew Charitable Trusts shows that there are state differences in personal income growth but not one state saw inflation-adjusted income fall last year. (Rhode Island was even). To put that number in context, in 2013 40 states saw personal incomes fall. 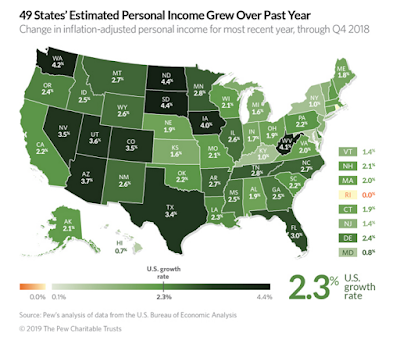 In which voter groups was Trump the weakest in 2016?

Do these voting groups believe they are better or worse off than today than in 2016?

I thought this internal data from a recent Quinnipiac poll was also interesting.

Of course, in this highly partisan day and age it is difficult for many people to separate their political views from their economic outlook.

Notice as as well that we keep hearing about the financial challenges for those 18-34. We hear about Millennials living in the basement of their parents. We hear about their student crushing student loan. We hear about their reported dislike of Trump. However, this age group, more than any other, says they are better off with Trump that they were when Obama was President in 2016?

Are you beginning to understand the importance of someone's pocketbook?

Finally, as to the poor perception that voters have of Trump.

This is undoubtedly true but it was also true when he was elected in 2016. A recent Gallup poll actually shows that more Americans believe that Trump has the personality and leadership qualities a president should have today than they did two years ago. Trump is at 40% on this score today compared to 33% in 2017. In particular, notice that all groups have moved towards Trump's style over the last two years.

Voters seem to care more about results and where Trump stands on the issues rather than personality. 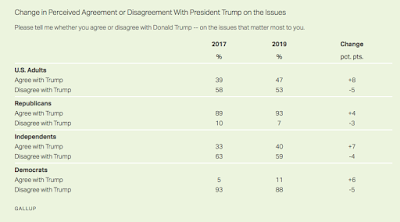 Do you remember that right after Trump' election that there was a constant drumbeat of doom and despair from Democrats as to what a disaster Trump would be as President?

I wrote at that time that the Democrats really did fear a Trump Presidency. However, they did not dare say the real reason they were fearful. Their biggest fear was that he would be successful.

Their fears have been realized.

It has been said that a rising tide raises all boats.

That, more than anything else, will determine the electoral fortunes of Donald Trump next year.

The Democrats are left with hoping the economy craters or they find a way to impeach him.

Neither are good choices for the country. I doubt the Democrats care. It is all about power.