The focus is on the Democrat debates this week as I wrote about in my last post. I thought I would also provide some thoughts on where I believe Donald Trump stands now that he has officially announced he is running for re-election.

There have been a lot of polls out recently that are telling us that Donald Trump will be a one term President.

Quinnipiac had similar numbers for Trump against Biden and Sanders and showed him down 8 to Kamala Harris and 7 to Elizabeth Warren.

What do I make of all this?

Not much. We are still almost a year and a half from the election.

In the last cycle most pollsters did not have it even close the day before the election.

I am much more interested in analyzing fundamentals right now than looking at polls.

What do I mean?

At this point four years ago Donald Trump had just announced his candidacy ( June 16, 2015).

Four years ago this week Trump was favored by only 3.2% of GOP in the Real Politics polling average.

Let's look at the fundamentals. All of these suggest that Trump is in a much better place right now than he was four years ago when it was generally assumed he had no chance.

Incumbency
Trump is President and history suggests that incumbents have a built-in advantage.

The Economy
Incumbents are particularly difficult to beat if the economy is good. As I pointed out in an earlier post, an incumbent President has not lost one time in the last 100 years when there was no recession in the two previous years before the election. 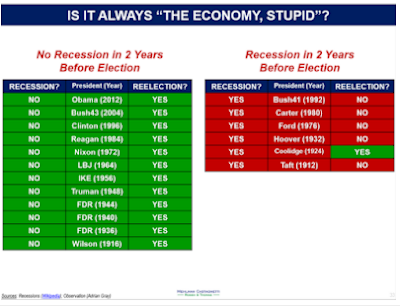 Money
Four years ago Trump was self financing his campaign and had to defeat 16 other GOP rivals for the nomination. He never was able to tap into traditional Republican money sources for the general election. He ended spending half the money that Hillary Clinton did in the general election campaign.

This time is altogether different. Trump will have access to those GOP money sources. His campaign has also demonstrated it is very good at raising money from small donors.

For example, Trump raised $30 million in the first quarter, 2019. The average donation was just $34.26. 98.79% of the donations were from people who gave less than $200! That is better than Bernie Sanders has ever done with small donors.

Trump raised a staggering $24.8 million in the 24 hours immediately after he officially announced his re-election campaign. No Democrat candidate raised $20 million in the entire first quarter.

It should be remembered as well that this is all before the Trump campaign starts going after large donors.

Trump looks like he will have an enormous financial war chest

He will also likely only have token opposition in the primaries so he will not have to spend as much as his Democrat rivals do either.

Solid Base
It is very difficult for any candidate to win if they do not have a solid base of support from within their own party. Being an outsider, Trump had a challenge in getting the base behind him four years ago. Ultimately, he got the votes he needed but he took office in a vulnerable position as many GOP officeholders held him at a distance as did many traditional conservatives.

Most of that opposition has faded. Trump has won over most of his detractors. Trump's approval rating with Republican voters has consistently been around 90%.

There were many traditional Republicans who were very unsure about voting for Trump in 2016. I personally talked to a half dozen friends who did not know if they could vote for Trump in the days leading up to the election. I asked them what the alternative was? In the end, most told me they held their nose and voted for him.

Where are they today? I have not talked to one of them who is disappointed in Trump's performance. Yes, they still complain about his antics, and his use of Twitter, but every one of them says he has vastly exceeded their expectations.

I think that has to be true of almost all of his voters. Where are the people who voted for him who would not do it again? Again, there may be voters who do not his behavior or the way he acts as President. However, they knew that when they voted the last time. There is nothing new here. At the same time, the things he said he would do, he has done. There has been no bait and switch.

Trump got 63 million votes the last time. If he is going to lose, you have to find people who voted for him and think  it was a mistake. I am not sure how many people there are like that out there.

Energy
It is hard to win elections if your supporters are not energized about your candidacy. It is also hard to win if the candidate lacks energy.

Trump still has both and I have yet to see a Democrat candidate who can match that energy on either dimension.

I continue to be amazed that Trump can fill arenas like he does. I am also amazed at the energy and stamina that he brings to the job. I don't know how anyone can say that Trump does not work hard at what he does.

Out From The Shadows
Four years ago you had very few people who would admit in polite company that they were Trump supporters. Yes, he filled arenas and you saw a lot of yard signs in rural areas but you did not generally see these things in typical Republican suburban locales.

Inroads With Minorities
I said above that I don't necessarily trust polls at this point. However, it is hard to ignore some of the polls that show Trump has made significant improvement in his approval rating with African American and Hispanic voters. For example, in a recent Quinnipiac poll 30% of Black voters and 55% of Hispanic voters said they were better off under Trump than they were before he was elected.
Those are huge numbers coming from voters that Trump and other Republicans have had a hard time in attracting support from in the past.

We are a long way from November 3, 2020. However, when you analyze the fundamentals, Donald Trump is in a much better and stronger position than four years ago.

Those are hard to believe when you analyze the facts.

The polls might not show that number but Donald Trump is in an infinitely better position than he was four years ago when you look at the fundamentals.