Don't Trust Those Who Can't See What Should Be Seen

I have always believed that a fundamental difference between a Democrat and Republican is how they view the world. Democrats see the world in much more theoretical and idealistic terms. Republicans tend to be more practical and pragmatic in their outlook.

Democrats generally confine themselves solely to visible effects.  They seem to consider only first-level effects and ignore everything else that might flow from that. All of their focus is on what they see in front on them. They ignore the unseen issues. Republicans, on the other hand, are considering both the immediate effects and second-level effects. The seen and the unseen.  Especially the unseen effects which should be foreseen.

A few examples that I have written about previously.

Welfare-  Democrats can't do enough to help the people in need that they see.  Food stamps, housing assistance, Medicaid, long-term unemployment assistance.  It is natural to want to help people who need the help.  However, what about the unseen problem that in all of this we may also be creating a cycle of dependency?  In the end our compassion may end up feeding the problem rather than solving it.

Abortion- A woman who is pregnant is seen and known. An unborn baby is unseen and unknown for most Democrats. We see the life affected today with that pregnancy. The life of that baby's future and their potential is unseen.

Gun control-  A person with a gun who uses it in a horrific crime is seen.  Democrats see that. However, unseen are the millions of guns in the hands of law-abiding Americans as well as the thousands of crimes that may have been deterred by that fact .

We can see this playing out right now in the immigration chaos on the southern border.

We historically had very few children arriving at our southern border either alone or with adults. Most illegal immigrants were single adults. Many were men looking for work.

That all changed right after Barack Obama implemented the Deferred Action for Childhood Arrivals executive order  (DACA) in June, 2012. (I am sure that it was just a coincidence this was done right before the 2012 election.)

This chart by Pew shows that after Obama put DACA in place the number of children apprehended at our southern border started trending upwards. The number of single adults dropped and the number of family units and unaccompanied children rose. People clearly saw the policy and believed that they had a chance to get taken care of as well.

Obama may not have seen it at the time he did DACA but we surely see it now. 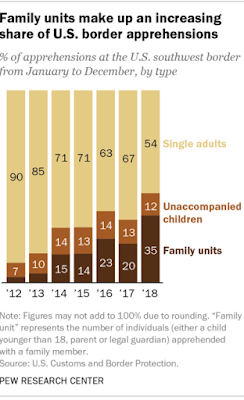 Of course, as I also pointed out in my recent post on "The Indefatigable Donald Trump", this trend turned into an explosion once people also started to believe that President Trump was serious about building a wall and closing the border.

How can anyone look at this chart and not admit that we are in the midst of a full-fledged invasion on that southern border right now? 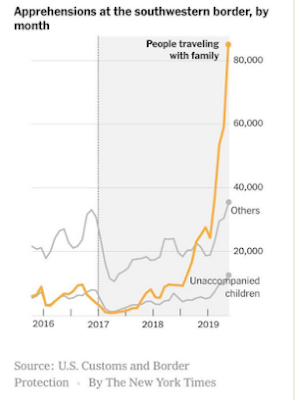 This all ought to be a lesson to anyone proposing any major changes in policy that they should be carefully considering the seen, but the unseen effects, as well.

Where do I see real risk in unseen effects with some of the popular Democrat policy proposals?

Let's take Medicare for All.

All of the Democrats seem to assume the underlying health care system will continue just as it is today if they were to move to a Medicare for All system.

However, what if doctors decide that they don't want to continue working in that system? You might not realize it but Medicare only pays doctors and hospitals about 60% of what private insurance pays.

I have talked to several doctors recently who told me that they would likely retire if Medicare for All is implemented. They are close to, or already at retirement age, but they still enjoy making a contribution as well as getting paid for it. The same calculus would not apply for them under Medicare for All.

The average U.S. doctor makes about 5 times the average wage in the United States.

Compare that to what general practitioner physicians earn in other countries that some Democrats say should be models for our healthcare system.

Make no mistake, doctor and nursing pay would be significantly squeezed in a Medicare for All world. In some Democrat proposals, doctors and nurses would actually become government salaried employees. It is likely many hospitals would have to close.

Consider as well the age distribution of physicians in the United States. Nearly half are 55 years of age or older. 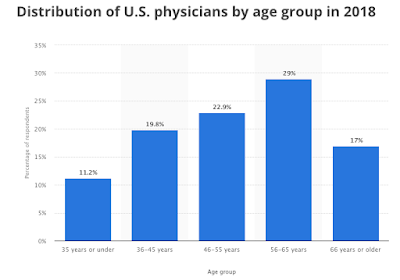 Do you see an unseen problem?

What would the Democrats do if tens of thousands physicians decided to retire rather than keep working under a Medicare for All model? Pass a law requiring them to work? Wait times to get medical care would clearly increase substantially as doctor shortages quickly became evident. Bear in mind that, even without any "unseen" effects from Medicare for All, it is projected there will be a 120,000 doctor shortage by 2030 according to the Association of American Medical Colleges.

Let's also look at the proposal to forgive student loan debt or provide free college to everyone.

As I have written before, it is not hard to predict that those who sacrificed and paid for college would be unhappy about seeing others have their debts cancelled while they got nothing for their hard work and effort. I can foresee problems galore with that.

To begin with, only about 1 in 3 adults in the United States went to college and they generally are making less money than those that went to college. How is it fair to tax them in order to forgive college debts.

Of course, Bernie Sanders will tell people he is taxing Wall Street. However, who will really pay that tab? The tax is actually on financial transactions. Wall Street is just a middle man. The cost burden will fall on those who own 401k's, mutual funds, IRA's and use bonds to finance capital investment. In other words, Mr. and Mrs. America. What happens if that tax on transactions means that a lot less transactions take place? You might very well destroy the capital markets and have little revenue to show for it.

Every effect has other effects. Nothing stays the same when you introduce different incentives and penalties to the system.

What else could be wrong about free college?

Have you ever thought how much GI benefits mean to recruiting enlisted personnel for our armed forces? We have a voluntary military and one of the real benefits recruiters have at their disposal is offering recruits GI Bill benefits that can provide as much as $50,000 in tuition assistance for as little as two years of service.

I could not find a reliable number on what percentage of enlisted personnel are motivated to join the military based on the promise of these benefits.

However, the Congressional Budget Office reported recently that $65 billion was spent on GI college benefits between 2010-2016 for 1.6 million beneficiaries.

In that there are about 1.3 million active duty personnel right now you can see that a substantial number of veterans must have been motivated to enlist, in part, due to the GI benefits.

What happens to the all-voluntary military if college is free and those who are now enlisting to pay for college don't have to do that anymore?

Do you see an unseen problem?

Could we soon have to bring back the military draft to maintain force readiness?

Have the Democrats thought of this?

Everything is always going to be wonderful in the theoretical mind of a liberal Democrat.

They see a problem and they have a ready solution to solve the problem they think they see.

However, every problem that is seen has a series of untold effects that are unseen.

It is these effects that the Democrats never seem to see... or even consider.
Posted by BeeLine at 11:00 PM