Water, Waste and the World

In my last post I wrote about form and substance in politics.

Form always seems to be preferred over substance in politics.

Barack Obama was all about form. However, there was little in the way of results or substance in anything he said or did.

Donald Trump lacks almost all form. He is nothing like we have come to believe a politician is supposed to act. However, as I pointed our in my previous blog, the things he has accomplished are substantive.

There are no bigger issues in politics where form is given more weight than substance than those involving the environment and climate change.

There are a lot of people talking and acting like they care about these issues and are quick to lecture everyone else about how noble they are. However, if you look at the facts, most of what they are doing is merely a show. Their actions will do little to address the biggest problems.

Even if their motives are pure, what they are doing is mere window dressing when you actually look at the issue. Perhaps it makes them feel good that they think they are doing good even if it matters little in the larger scheme of things.

If you really want to solve a problem, you address those things that have the greatest impact. You don't dance around the margins.

I consider myself a strong conservationist and environmentalist. I firmly believe that we have a solemn responsibility to be good stewards of what God has blessed us with.

We must use our resources wisely and insure that they will continue to bless and benefit future generations.

For a little perspective, consider the amount of water on earth.

We often hear that 70% of the surface of the earth is composed of water. However, how much water is there compared to the total volume of the earth?

The amount of water is shockingly small when looked at this way as this graphic from the US Geologic Survey shows.

All the water on earth would only fill up a small orb that would not even cover half of the United States. (the blue orb centered over the Western United States in the graphic below). The diameter would be about 860 miles meaning it would be as deep as it is wide if you are wondering how all the water of the oceans could fit in that little orb. The deepest parts of the ocean are only about 7 miles deep. 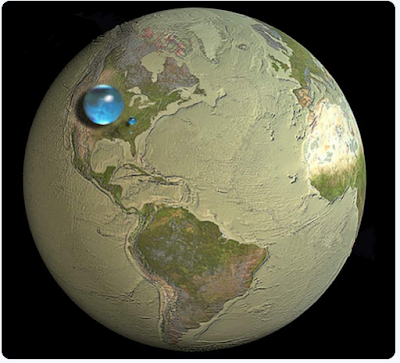 The smaller blue bubble centered over Kentucky represents the volume of all fresh water on earth which includes all underground aquifers, ice caps, atmospheric moisture, glaciers, rivers, lakes and swamps. The diameter of this bubble is about 170 miles.

There is a pin prick blue bubble over Atlanta, Georgia that represents the volume of the fresh water that excludes those sources that are generally not accessible to us. This blue pin dot represents the volume of all lakes and rivers on earth which is the source of most fresh water used today. This little bubble would be about 35 miles wide and deep. By contrast, Lake Michigan is only about 300 feet deep.

Here is a summary of all the water on earth by source and volume.

Seeing this ought to make us better understand the need for conservation of water on our planet. It is a most valuable resource.

However, how is that water used?

A lot is made about using low flush toilets and not letting the water run while brushing our teeth, but how much water is really used in our daily activities?

The fact is that it is very small compared to industrial and agricultural uses. Only 13% of water use annually is for domestic purposes--drinking, bathing, cooking etc.

Every little bit helps but anyone really serious about water conservation should first worry about ways to save water in industry and farming before worrying about a low-flush toilet.

Similarly, there is a large hue and cry now about banning plastics---straws, grocery bags and the like. The argument is that these are bad for the environment and contributing to climate change.

We see images of gigantic swaths of plastic waste in the ocean which are horrific. 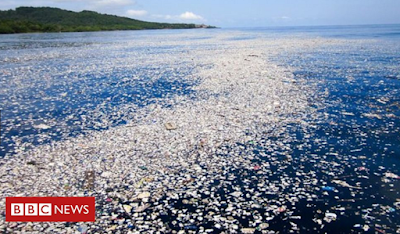 California and Hawaii already ban plastic bags and a ban in New York state is scheduled to take effect March 1, 2020. Plastic straws are banned in restaurants in California unless the customer asks for one.

Will banning plastic straws and bags have any effect on improving the picture above? Almost assuredly no.

Almost all of the plastics in the ocean are coming from China, Indonesia, the Philippines and Southeast Asia. Almost nothing is coming from North America. 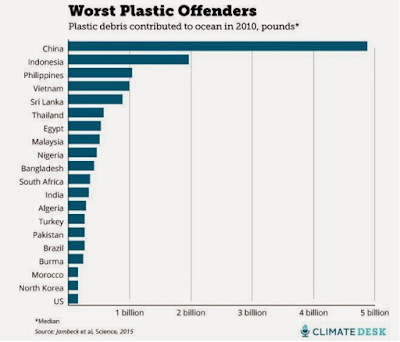 Furthermore, almost half of the plastics are fishing nets.

Straws make up just .03% of all ocean plastics.

It is especially interesting that the same people who want to ban plastic straws in California are so vehemently opposed to President Trump and his agenda. Look at the numbers above and tell me if you think it is a great idea to be outsourcing so much manufacturing to China and others in that region with their environmental standards. You may recall that President Trump refused to proceed with the Trans Pacific Partnership (TPP) trade agreement with many of these countries due to concerns about the fairness of the deal to the USA. Those concerns included the tremendous difference in environmental standards between the USA and those countries.

There is also a new study out on plastic bags that indicates that those bags are actually many times more beneficial to the environment,and in limiting carbon emissions, than other alternatives.

For example, it is now in vogue to take your cotton bag to the grocery store to bring your purchases home like the one below and eschew the plastic bag. This is supposed to be a symbol to show how concerned you are about saving the planet. After all, when you use it you advertise it right on the cotton bag. 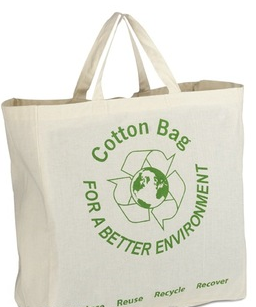 However, a 2018 study by the Danish Ministry of Environment and Food found that you must reuse an organic cotton shopping bag 20,000 times before it will have less environmental damage than using a single plastic bag and then disposing of it.

Let's put that in context. If you go to the grocery store twice a week it would take 191 years of using that cotton tote in order to come out ahead on total environmental terms compared to using that plastic bag,

The plastic bag also beats out the plain paper bag. It would take 43 uses of a paper bag to do a better job for the environment than using a plastic bag. Of course, I doubt much would be left of the paper bag after as few as 10 uses.

Here are the actual numbers from the study. Note that the assumption made is that the plastic grocery bag is also reused once as a garbage bag. This is exactly what Mrs. BeeLine and I do. 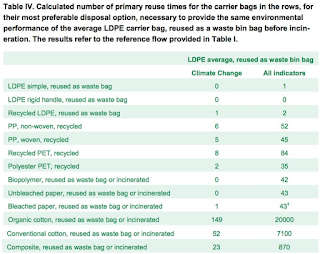 Feel free to avoid plastic bags, plastic straws and turn the water off when you brush your teeth.

It is good form to do so. You are being a good steward.

However, in the world we live in today it does not matter as much what you are doing as what billions and billions of other people are doing half way around the world.

That is the substance of the issue that we hear almost nothing about.