The first debates for the Democrats seeking that party's nomination for President are this week.

20 out of 23 announced candidates have qualified to appear at the debates. This means that there were will be two nights of debates with 10 candidates appearing each night.

USA Today's graphic nicely shows the lineup for each night. 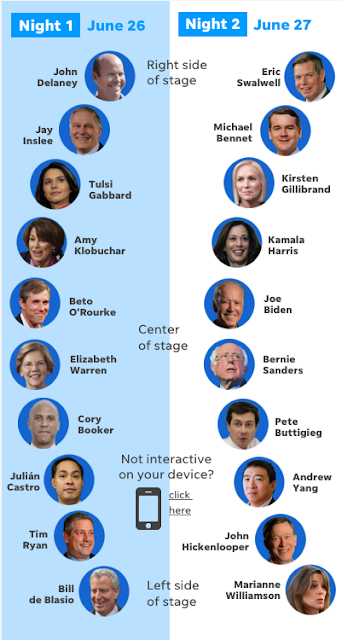 These are the three candidates that did not qualify for the debate stage based on the DNC rules. 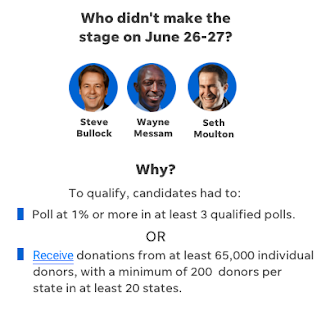 The candidates were assigned to each night randomly from two categories---those polling greater than 2% and those polling less to insure that there is equal representation of polling leaders and laggers on each night. That may have been the intent but 4 of the top 5 in recent polls (Biden, Sanders, Harris and Buttigieg) ended up together on Thursday, June 27. This was done to avoid a "kid's table" debate but it appears that is where Elizabeth Warren ended up. It remains to be seen whether that will help or hurt her.

I think debates are very valuable as they are the first real chance that most voters have to really see, hear and evaluate the candidates.

Some of the people on that debate stage are well known but most voters probably have never seen them outside of a 10 second news bite or their picture on the internet.

Little known names have become big-time once they got to the debate stage. Barack Obama and Mike Huckabee are good examples.

I have no doubt that one or two of these candidates will get a major boost from the debates due to their performance.

It is also more than likely that one of those near the top of the pack may find the debates will mark the beginning of the end for their campaign.

The biggest challenge for the Democrats generally is to sell themselves to primary voters while still being able to attract mainstream voters in the general election.

This has been an issue for Democrats and Republicans alike in past elections but it appears to be a particular problem for Democrats this year with the hard left-turn the party faithful have taken.

With the candidates running so hard to the left will it be impossible to convince mainstream voters to vote for them in November, 2020?

I recently came across an interesting graph that illustrates the problem.

As the graph illustrates, voters who participate in primary elections are decidedly more partisan than other voters. This is true for voters in both parties. Those who vote in primaries are much more partisan and ideological than general election voters. 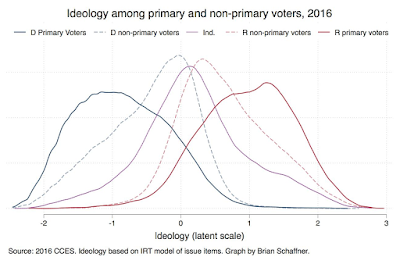 The further left on this scale the more liberal you are. The further right the more conservative.

The height of the lines represents the number of voters.

Note how primary voters of both parties spread ideologically left and right as you would expect.

Notice as well that Independents are actually a little right of center. They are not directly in the middle. They lean a little right. Democrat non-primary voters are almost right on the center line ideologically. That is a long way from what many Democrat candidate appear to be selling right now.

In some ways this graph explains why Donald Trump won the Republican primary and also won the general election. Part of that was due to the fact that he had positions on some big issues like trade and foreign policy that were not what were considered "conservative" positions. His strong position on immigration and protecting American jobs also helped with those middle of the road Democrat voters.

He won because he was able to retain a strong core of ideological Republicans to his cause but also broadened his voting bloc with Independents and Democrats that were not ideological firebrands. As noted above, there are a lot of Democrats voters in that category.

You are likely to see one Democrat after another on that stage spend all of their time trying to appeal to those left-wing Democrat primary voters. However, with each word they risk losing those Democrats and Independents in the middle that they need to win the general election.

Here is another graph from The Economist that is interesting in that it shows the distribution of ideology of House primary candidates by party since 1980. We often hear that the widening gap in ideology between the parties is a reason little can get done in Washington any more. As you can see, Republicans have moved a little right since Reagan. Democrats have moved massively to the left.

If you wonder where the divide we have today comes from, look no further than this graph. 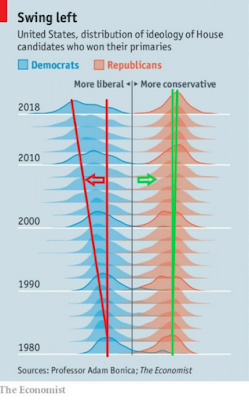 If I was advising one of the long shot candidates like Andrew Yang, Michael Bennet or Tim Ryan, who are not as well known and who do not have the same high profile liberal reputations as others, I would urge them to be be contrarians on some of the standard Democrat issues of the day. Come out strong for law and order, national security and a secure border. Show support for stronger trade deals. Have a more nuanced view of abortion. In other words, they might end up sounding a lot like Barack Obama did in 2008.

They are not going to stand out saying the same things as everyone else on that stage. Donald Trump understood that better than anyone.

These debates could be the launching pad for the Democrats to capture the White House. Or they may ultimately lead to the Democrats becoming nothing more than a fringe, regional party that only appeals to large urban and special interest voting blocs.

Bring out the popcorn and enjoy the show.

However, if you are sitting anywhere near the middle or right of center in the audience, I would not expect to get much eye contact from those on the stage.
Posted by BeeLine at 2:01 PM