It Is the Way It Is

The United States women's soccer team is making headlines at the World Cup.

They beat Thailand 13-0 in the open round this week. They were also criticized after the win for the excessive celebrations they participated in on the goals they scored later in the contest when the game was well out of hand.

Earlier in the week the team was also in the headlines for the lawsuit they filed in federal court alleging "institutional gender discrimination" in that the United States Soccer Federation is paying women on the US World Cup team less than it pays the men.

The women would appear to have a good argument in that the women are the defending World Cup champions and the United States men have made it to the quarterfinals only once (2002) in modern history.

However, is that the end of the story?

US Soccer seems ready to vigorously defend against the complaint and argues that that the women’s and men’s national teams “... receive fundamentally different pay structures for performing different work under their separate collective bargaining agreements that require different obligations and responsibilities.”

Whenever you have compensation questions you first must consider the revenue source that is going to pay that compensation. The bottom line is that no one gets paid unless a willing consumer is willing to pay for a product or service.

In sports, you need to sell tickets. Or tv rights. Or get revenue from corporate sponsors. Someone has to want to pay to see the athletes perform. Compensation of an athlete is almost always a function of revenue. Ticket price, tv rights and sponsor packages have to support the pay the athletes receive.

Let's look at World Cup revenues between men and women.

The last men's World Cup in soccer brought in $6 billion in revenue.

This year's women's World Cup in soccer is expected to generate $131 million.

Let me do the math for you. The men are bringing in almost 60 times the revenue the women are in their world cup competition.

Women do better on this score in tennis. All Grand Slam tennis events pay the same purse to both men and women. However, all of the Grand Slam events (men and women) are played at the same time and share the same venue. The women do not have to sell tickets, tv rights and get sponsor packages alone. They gain leverage and synergy through their relationship with the men. This is a big difference compared to other sports.

We often hear the statistic that women only earn 79 cents for every dollar that a man earns in pay.

This is accurate but is a bit misleading. It does not take into account the larger number of women working part-time hours or choosing lower paid occupation groups. For example, women are vastly overrepresented in Healthcare, Personal Care & Service, Education, Office & Administrative Support, and Community & Social Services — typically lower-paying occupations. At the same time, men are overrepresented in higher paying occupations like Engineering and Computer Science.

Women make up only 26% of Computer Science and Mathematics jobs. They only make up 16% of jobs in Architecture and Engineering.

On the other hand, women make up 87% of jobs in healthcare support, 77% in personal care and service and 67% in community and social services.

There is also an argument made by some that this results from women being directed into these occupations by some type of cultural stereotyping or bias. There is some type of gender inequity at work that pushes women away from higher paying STEM (science, technology, engineering, mathematics) degrees and careers.

However, as I wrote in a blog post last year, the facts are exactly the opposite.

Research indicates that in countries with the greatest gender equity you actually have the lowest percentage of female STEM graduates.

It seems that the greater the gender equity, and the higher the economic security for women, the more freedom females seem to believe they have the freedom to major in what they really want to do. 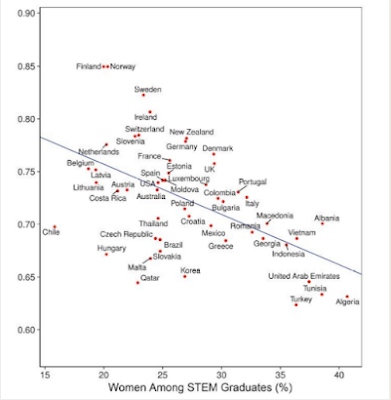 On the other hand, in Algeria, Turkey, Tunisia and the United Arab Emirates you will find lots of them. All of these are Muslim countries which are hardly known for gender equity.

Could it actually be true that women have a more nurturing side that causes them to gravitate to jobs that this is an important factor such as in healthcare, education and community and social services?

It is not politically correct to suggest that but what do the facts tell you?

The facts on gender pay equity are also different when you adjust for the differences in job selection by men and women.

When the data is adjusted to to look specifically at men and women in the same jobs and with the same qualifications, the pay gap narrows so that women are actually paid 98 cents for every dollar that a man makes. You rarely see this fact reported in stories on pay equity.


This clearly is still not fair but who is responsible for this pay gap in business?

It would seem that the finger would have to point primarily to the Human Resources function within businesses since that is the group within companies that have primary responsibility for pay scales and compensation. Human Resources is also generally responsible to insure that employees are treated fairly and equally within an organization.

Who exactly are these Human Resources people?

I used to be one. I had specific responsibility for Benefits and Compensation for a Fortune 500 corporation. I can also tell you that not once did gender ever enter into any compensation decision that I was a part of. Not once was there any thought that if a woman was in a job that she would be paid less than a man.

Moreover, the fact is that 73% of all the people who hold Human Resources managerial positions in the United States are women.

Are we to believe that these women in HR, who are setting the compensation structures, pay scales and advising others on hiring pay, annual increases and promotional increases, are discriminating against other women?

I can think of nothing more important than pay equity when it comes to anyone's labor. However, like anything else, it is important that the issue be put in proper context.

A woman laboring as the CFO at a struggling start-up or small family business may be just as talented and hard working as a female CFO at a multi-billion dollar Fortune 500 company. Guess who is going to make more money?

It is not discrimination. There are facts and economic realities that make that the case.

The same is true for professional women athletes like the US Women's Soccer team.

The same is true for the 2 cent differential in the pay gap between men and women with the same jobs and same qualifications. I don't know why it exists today but I sincerely doubt that it has anything to do with conscious gender discrimination. After all, most of the decisions on what women are being paid today are being made by other women.

My guess is that we will see the gender pay gap in business disappear in the future, if not reverse, in favor of women. The fact that almost 60% of college degrees now go to women would seem to put men at a severe disadvantage over time regarding compensation. With each additional year more women are also gaining experience in their positions that inevitably factors into pay. It is important to also remember that we are only 25-30 years removed from when there were very few female managers in most businesses.

If that does not occur, I know who to blame.

There is no equity in this either. However, it is the way it is.
Posted by BeeLine at 11:15 PM