We are in graduation season and many young men and women are thinking about what they want to do with their life.

I came across this article by Visual Capitalist that took data from the 2018 Jobs Rated Report by CareerCast.com on the most common careers based on median income, stress, growth outlook and workplace environment, and used it to rank 100 common careers from best to worst.

I found this kind of humorous because who chooses a career as a Military General or a Senior Corporate Executive? I think there are quite a few steps on a career path that leads in that direction before you get those high levels of compensation. However, I would not consider a Military General to be a "career". Shouldn't that career be that of a military officer?

The same is true for Surgeons and Dentists. It takes a lot of education and training before you can expect to be pulling in the big bucks in these "careers".

Of course, this data might be directed to younger audiences who seem to have a distorted view of the career paths. For example, a recent survey found that 75% of Gen Z workers believe they should be entitled to a promotion in their first year on the job. With promotions every year it should not take long to go from the shop floor to the "C" Suite or private to General.

What are the five best career choices according to the CareerCast.com data?

Notice that in each of these careers the low stress is probably due to the fact that these jobs likely have very limited needs to interface with the public and angry consumers. For the most part they are also not under intense time deadlines in their jobs.

If you are like me and are not quite sure what a "Genetic Counselor" does, here is a description of the career provided by RaiseMe.com. This was definitely not something you could major in when I was in college 50 years ago.

Some interesting observations on median salaries in the various careers.

Any young person considering a career should understand that some careers appear more glamorous than they really are when it comes to paying the bills.

Keep this in mind as well in taking on student loan debt.

Here is a summary ranking that compares pay and stress by Visual Capitalist. 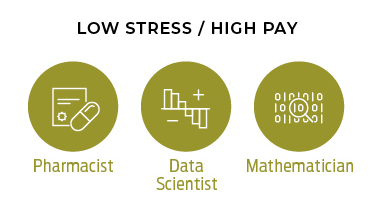 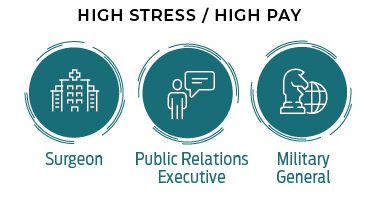 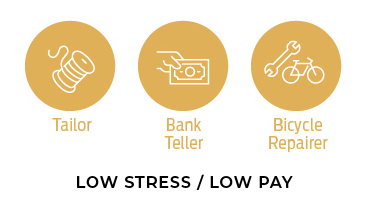 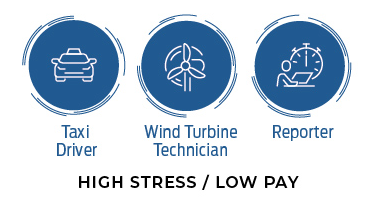 Over the years that I have observed many people and their careers. This includes time when I was a Human Resources executive and nurturing those careers was part of my professional responsibilities.

Too often I observed two extremes when it came to the career paths of many people I encountered.

There were too many people who seemingly gave little thought to their career and random circumstances ended up controlling their lives. They wanted to be in public relations and ended up selling fire suppression systems. They wandered into something and it captured them for life. They did not choose a career. The career chose them by pure chance.

You also have the other extreme where someone is always looking for the perfect career choice and never finds it. They get three degrees and yet they are never satisfied with their career. They are always dissatisfied with where they are and what they are doing.

For most people I think the reality is there are a range of good career choices in which they can excel. The best thing they can do is pick one with some care and consideration and then make it great with passion, purpose and hard work.

You can't lose with that career advice whether you are a bank teller, taxi driver, genetic counselor or candlestick maker.
Posted by BeeLine at 8:02 PM