It is a window to the future that is too often overlooked or ignored.  The long-term trends are often the most difficult to see in the 24 hour news cycle world we live in today.  In this day and age, when there is so much focus on the trees (even the leaves at times!), demography forces you to look at the forest.

I have watched trends in births over the years and have written about those trends from time to time in BeeLine.

I have even maintained my own chart of U.S. births over the years. The CDC recently released its preliminary report on 2018 births and this is my updated chart on births going back to 1950. 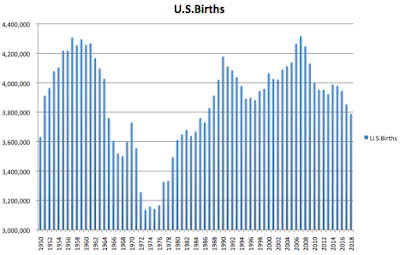 As you can see, we are generally in a period of declining births in the United States right now.

We reached a peak of 4.32 million births in 2007 and the CDC's preliminary numbers show that births were down to 3.78 million in 2018. That is actually the lowest number of births in the United States in 32 years.

The fertility rate dropped to 59.0 per 1,000 women aged 15-44 which is also the lowest number ever in the United States. The total fertility rate (TFR), which is the estimate of the average number of children a woman will have in her lifetime, dropped to 1.73. This is also a new low. A 2.1 TFR is necessary for a given generation to replace itself.

Teen birth rates continue to drop to record lows and women between the ages of 30-34 have the highest fertility rates but more babies are actually being born to women between ages 25-29 (there are more women in this age cohort).

The birth data also pretty clearly tells us that Whites will become a minority of the population in the United States within 25 years. Demography is destiny.

Whites only comprised 51.5% of total births in 2018. Hispanics comprised almost a quarter of all births and Blacks were about 15% of all births. The balance were primarily Asian.

However, the percentages by state vary considerably.

Other states in which White births were less than half of total births were Arizona, Delaware, Florida, Georgia, Hawaii, Maryland, Nevada, New Jersey, New Mexico and New York.

What are the states where Whites still make up more than 75% of all births?

West Virginia and Vermont both had Whites accounting for 91% of all births. Other states that were 75% or higher were Idaho, Iowa, Kentucky, Maine, Montana, New Hampshire and Wyoming.

Ohio is the only relatively large population state that had high numbers of White births (97,000) and those births also made up over 70% of all births.

There is no data on the number of births that were to mothers who were born outside the United States in these preliminary birth numbers for 2018. I have researched this topic previously and found that this data specifically does not attempt to separate out births of children to illegal immigrant mothers.

Tracking this data seems to be politically incorrect today. However, Parkland Memorial Hospital in Dallas (the hospital JFK was taken to after he was shot) reported that 70% of the 16,000 births there in 2006 were to illegal immigrant mothers. You have to wonder what that number would be today.

We also don't know the number of women who travel to the United States specifically to give birth to gain citizenship for their child and then return to their home country. This is called "birth tourism". One estimate puts this number at over 30,000 annually. It is particularly popular with Chinese and Russian women. I spoke to someone last year who said they were on a flight from Shanghai to LA in which a majority of the women on the plane were pregnant and planning to deliver their baby in the United States. Earlier this year 19 people were charged in three "birth tourism" schemes in Southern California.

Miami is the preferred birth city for Russian women. This AP article states there are 30 birth tourism companies operating in South Florida alone!

Why is this possible? Birthright citizenship for the new baby.

However, birthright citizenship not only provides citizenship to the new baby but also provides a pathway for the parents and other family members to gain future USA citizenship due to the family immigration and the chain migration rules under current immigration law. (I use the term "law" loosely because most of the time it is difficult to see how the "law"is being enforced)

After all, we shouldn't expect that the mother of that child is looking to separate herself from her child over the course of their lifetimes.

That is not the American way.

If you don't believe that, consider this interesting fact I recently came across.

The typical adult American lives just 18 miles from their mother.

In some areas of the country it is just 6 miles.

We hear a lot about the independent spirit of those in the Mountain states like Colorado, Wyoming and Idaho. It really is true looking at the graph below. People in these states live a median distance of 44 miles from their mother.

Data on births point to a starkly different population make-up in the United States in future years.

Immigration trends (legal and illegal) will accelerate that destiny even faster than births alone will.

The physical look of Americans will change dramatically compared to the past. It remains to be seen whether these new Americans will adopt and embrace the philosophical framework that has made America the greatest country to ever exist on the face of the earth

The United States is a nation of immigrants. It has prospered and succeeded because the immigrants who came here over the years embraced their new country, its principles and ideals. Will that continue to be the case? If it is not, the United States of America may be unrecognizable compared to what we know it to be today.

We will have to wait and see where that destiny takes us.

We will also have to wait and see if those future Americans are still living just 18 miles from their mother.