Courage and Commitment on Trade

A lot is being made of the 25% tariffs that President Trump has imposed on $200+ billion of Chinese imports.

Trump originally imposed a 10% tariff on these goods last September as a way to get the Chinese to the bargaining table. Sources say that the Chinese had agreed to a comprehensive trade deal in those talks only to renege at the last minute. This led Trump to turn up the heat on the Chinese some more with the higher tariff rate.

Another $300+ billion of Chinese goods that are imported to the United States have not been included in the tariffs. These include phones, shoes, apparel, auto parts and other items. Trump continues to hold this back if he needs more leverage. 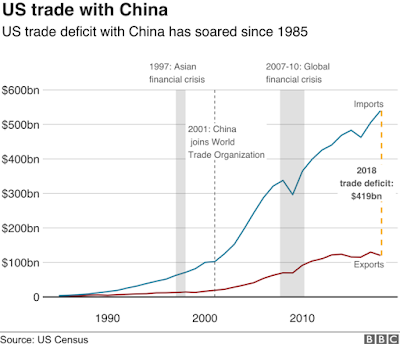 China's economic power has grown over the years with its one-sided trade views. China effectively closed off imports of U.S. goods for decades. To do business and get access to its huge consumer market the Chinese government forced many U.S. companies to commit to manufacturing sites there, in addition to requiring them to provide their most valuable intellectual properties in order to have an entry into the Chinese market. What intellectual property China did not obtain legally they stole illegally.

At the same time, China began flooding the U.S. with imported products fueled by cheap labor and lax environmental and labor standards.

Republicans and Democrats alike did nothing about the inequity or the illegality. Our elected representatives literally gave away substantial portions of our domestic economy by thinking short-term rather than long-term. They had the advantage of having the most attractive market in the world and yet they gave it away and did not get anything in return.

China grew and got richer with each passing year. At the same time, the United States saw millions of high paying middle class manufacturing jobs lost. This change also caused a further worsening of the social and economic divide between the college-educated service class and the high school educated worker class.

Only one man really stood up and questioned the wisdom and fairness of it all. That man was Donald J. Trump.

It is not easy negotiating with the Chinese on trade because they have had it so good for so long. No one wants to give up an extremely advantageous situation easily. The Chinese are no different.

The mainstream media seems to be portraying all of this as another example of an unhinged Donald Trump who is going to do great damage to the American economy and consumer.

Here are a few headlines in the wake of the tariff announcement.

Trump has been derided in the past for stating that "trade wars are good, and easy to win."

I don't know that is always true but it is a lot easier to win a trade war when your country is importing a lot more than it is exporting. And that is the case with the United States today---by a wide margin.

Beyond thinking about the long term, rather than the short term, Trump understands that in order to do deals and reach agreements, you need to understand your strengths and weaknesses. You also have understand the strengths and weaknesses of your adversaries. You also have to be able to apply leverage when you have it. Most everyone on the planet is driven by enlightened self-interest. There are not many who have something that they are going to give up willingly.

It might require a little bit of short-term pain to get the right long-term deal with China but I think a lot of the media scare mongering is overplayed.

Late last year I pointed to an analysis by a group of European economists who projected that most of any tariffs on Chinese imports would be borne by Chinese producers not American consumers.

U.S. companies and consumers will only pay 4.5 percent more after the nation imposed 25 percent tariffs on $250 billion of Chinese goods, and the other 20.5 percent toll will fall on Chinese producers, according to authors Benedikt Zoller-Rydzek and Gabriel Felbermayr.


Did we even notice any effect on prices from the 10% tariff already in place? Inflation is still running below 2%.

On the other hand, there has been a noticeable effect on the U.S-China trade balance since the tariffs were implemented.

Consider this report from the AP in which it was reported by the Commerce Department that the trade goods imbalance with China dropped 28% in February. 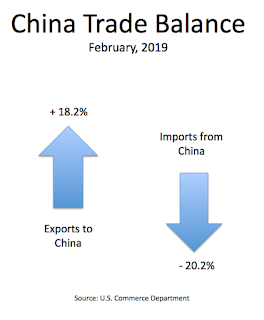 That is a pretty big change in a short period of time.

President Trump is also threatening tariffs on all foreign auto imports to correct the trade imbalance in this sector. That is also getting media push back. In this instance Trump is using the threat of tariffs in order to bring pressure on the EU and Japan to negotiate better bilateral trade agreements.

The rationale for this is that U.S. auto research and manufacturing are "vital to national security interests." That was a finding of a recent Commerce Department report. The same logic was used to justify tariffs in the steel and aluminum industries earlier and it is hard to disagree with that conclusion. The United States would be very vulnerable from a defense standpoint if it did not have metal and vehicle producing manufacturing plants.

The EU currently levies a tariff of 10% on all car imports. The similar U.S. tariff---2.5%. In addition, every car in the EU is also subject to the imposition of value-added taxes in individual countries that average around 20%. There is no corresponding value-added tax in the United States. 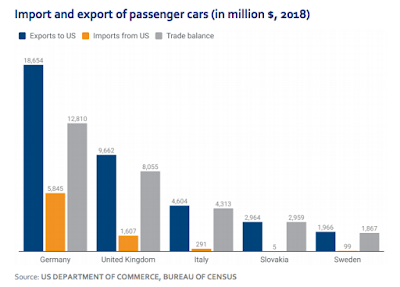 Japan has no tariff on cars entering its market but it has historically put many non-tariff barriers in place to protect its automotive market such as special standards, discriminatory taxes, and bureaucratic entry procedures. The result is that the average American car costs thousands more dollars in Japan than in the United States.

Japan argues that buyers in that country don't want U.S. cars and the U.S. automakers have just not made the effort to win buyers over. However, those automakers have been beating their heads against the wall trying to gain entry to that market for years which has made it difficult to put the dollars into making that effort worthwhile.

To give you an idea of how large the trade imbalance in autos between the United States and Japan is, consider that U.S. automakers currently sell only 15,000 cars a year in Japan. Japanese automakers are selling over 6.5 million cars in the United States of which about half are manufactured in the U.S. and the balance imported. Does that seem right?


Keep all of this in mind as you see news reports that try to paint Trump as unbalanced, unhinged or unreasonable.

Does it look like the United States is playing on level playing field in trade?

In the first few decades after World War II there were good reasons for Europe and Japan to want to protect their markets in order to allow them to rebuild their manufacturing base.

The same held true for China as it attempted to get beyond its status as an emerging economy.

Those days are gone.

It is long past time to have free and fair trade that goes both ways.

Fortunately, we have a President that understands all of this and is willing to hold those to account who don't want to play fair.

Would any other politician have the commitment and courage to do what he has done?

Those who like to criticize Trump should consider that question and think about what real leadership is all about. They may not like all that he does but doesn't an honest person at least have to recognize how much Donald Trump has singlehandedly changed the conversation on trade (and immigration) in a few short years. If nothing else, it is real testimony to what one man who believes in something, and is willing to back it up with courage and commitment, can accomplish.

Based on what I have seen, I think the Chinese and others would be wise to take him seriously.