About ten years ago I was invited to speak at a seminar in Washington DC on strategies for businesses to better promote health and wellness in the workplace.

Frank Luntz was the headline speaker at the program and he also facilitated a question and answer panel that I was on during the day.

Luntz is famous for the focus group panels he often puts together and facilitates during the political season as well as the best-selling book he wrote in 2007, "Words That Work". 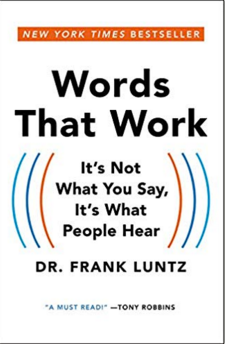 I thought about Luntz and his book when I recently came across an interesting article on TheVisualCapitalist.com that did a survey on word sentiment and the power of various positive and negative words.

For world leaders, journalists, CEOs, or anyone who has ever had to explain a dicey report card, word selection can have an enormous impact on how a message is perceived.

Does it make any difference whether a presentation went quite good versus pretty good, or if an earnings report is described as awful versus poor? According to a new survey from YouGov, word sentiment isn’t as cut-and-dry as one would expect.

Here is an infographic that shows the sentiment score of negative and positive words on a continuum. Note that the size of the hump shows where the most people were in agreement on where each word fell on the positive-negative scale.

Consider that "Very bad" is more negative that terrible, dreadful, abysmal or appalling.

Why? I think a big reason is that it is much simpler to understand. 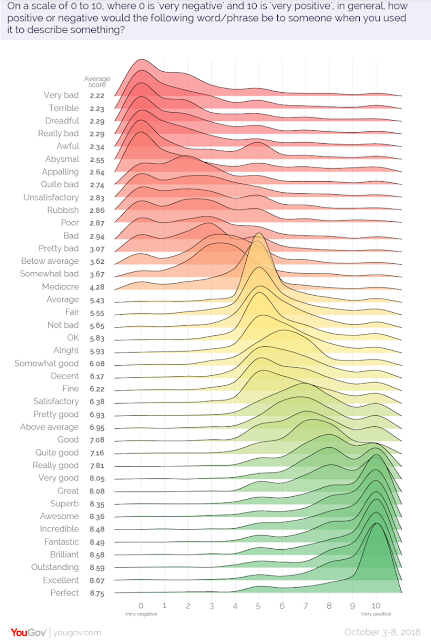 Note the second hump for abysmal in the graph at about the "5" level. I attribute that to a fair number of people who probably don't know what the word means. If you are in doubt on a 1-10 scale survey you mark it down as a "5".

Another word that must have thrown some people was appalling.  Look at the number of people who gave a positive score to appalling.

On the other side of the sentiment scale, perfect is more positive than excellent, fantastic, incredible, superb or awesome. Perhaps Millennials should say "perfect" rather than "awesome" at times.

The lesson here is that you will not be misunderstood if you say something is perfect. There is nothing else that can be done. You can't get more positive than that.

Although they share the same language, those in the UK perceive the same words in the English language differently than their brethren in the USA.

Here is the sentiment scale for the Brits. 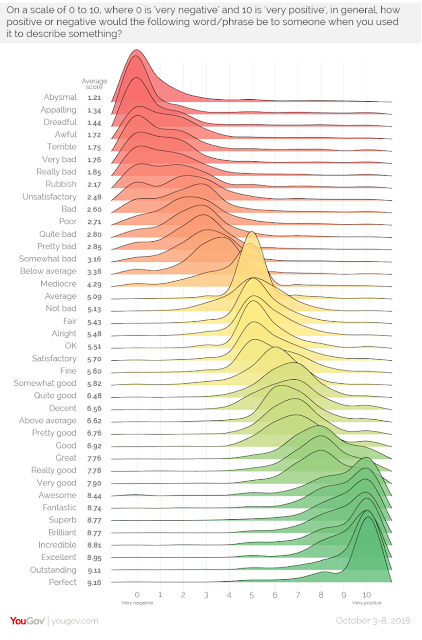 Those in the UK clearly know what abysmal and appalling mean and they believe it is more negative than being "very bad".

Perfect is still the most positive word you can use in the UK as well as in the US.

The Brits have more defined "humps" in the graph indicating that there is more agreement where each word falls on the graph. Is it due to a better education in the English language in the UK?

I did not really understand how the word "great" is seen by the Brits as just a little more positive than good and it is actually not as positive as really good or very good. I see the sentiment progression on the American list as making more sense---good, quite good, really good, very good, great. (Is that because I am an American?)

I hope you don't see this as an average blog post.

It may not be perfect but how about an "Excellent" or "Outstanding"to describe it to make my week?