Can You Believe Anything They Say?

Do you remember the doom and gloom predictions the Democrats made right before the Trump tax bill was voted on in December, 2017?

Chuck Schumer of New York, the Democrat leader, said this according to the New York Times.

As the final vote approached in the Senate, Chuck Schumer of New York, the Democratic leader, gave his closing argument against the bill and scolded his Republican colleagues for talking during his remarks on the floor.

“This is serious stuff,” Mr. Schumer said. “We believe you’re messing up America. You could pay attention for a couple of minutes.”


That was relatively tame compared to what Democrat Nancy Pelosi had to say about the bill.

Pelosi called it "the worst bill in the history of the United States."

Of course, Bernie Sanders also weighed in at the time.

"..today is the day of one of the great robberies, criminal activities if you like, in the modern history of this country, because the federal treasury is being looted tonight."


I wrote at the time (right before Christmas, 2017) that we ought to refer to them as "The Democrat Grinches".

Not one Democrat in the House or Senate voted for the tax reform package.

So how has this all worked out almost a year and a half later?

Is the country messed up?

Was it the worst bill in the history of the United States?

Was it a criminal robbery unlike we have ever seen in the modern history of the country?

5.8 million jobs have been added to the U.S. economy since President Trump was elected.

Wage growth over the last year has been 3.2%. Year over year wage growth has exceeded 3.0% for 9 straight months. Before 2018 (when the Trump tax bill took effect) there had not been wage growth in excess of 3.0% in any rolling 12-month period since March, 2009.

Inflation (measured by CPI) is at 1.9% over the last 12 months meaning that we are seeing real wage growth.

Can you believe anything they say?

In addition, despite what Bernie Sanders called the criminal theft of the federal treasury, taxpayers (especially middle income taxpayers) are keeping more of what they make rather than being forced to turn it over to the federal treasury. Why do they always think it is their money, not ours?

A recent report by H&R Block, which included an analysis of all the tax returns it filed for its clients (most of which are middle or lower income filers),  found that overall income tax liability was down 24.9% compared to last year.

Refunds were up 1.4% compared to the prior year.

By the way, H&R Block prepared 20 million tax returns in its most recent reported fiscal year. That is a pretty good sample size of working class taxpayers.

I found this data particularly interesting in that we saw so many stories in the mainstream media during tax filing season that middle income taxpayers were not seeing any benefit from the Trump tax bill. Of course, a lot of that narrative was fed by Democrats who continue to repeat the falsehood that only the "rich" benefited from the tax bill.

Why did so many middle income Americans believe this falsehood?

H&R Block explains that most people ignored the increase they got in their take home pay once the W-4 withholding tables were adjusted in March. They only considered their tax refund when they filed their return. The average reduction in tax liability for H&R Block clients was $1,200 but the average refund was up by just $43.

In effect, the money was in their pockets the entire year rather than being held in the Treasury. That money in the hands of the American worker and consumer has had a big impact on the economic numbers we are seeing right now.

I thought this was a particularly interesting chart in the H&R Block report in that it shows the average tax liability decrease by state. 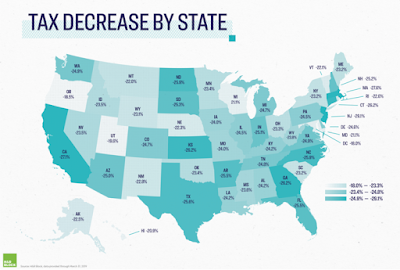 Why do I find it interesting?

Look at which states showed the largest tax decreases.

These are all very liberal states where you heard a lot of noise about the limitation of the state and local (SALT) tax deduction for those who itemized.

As I wrote when the tax bill was being discussed, this provision hit higher income earners and those with high property taxes disproportionately. It was the best way to skew the greatest tax benefit to the middle class.

Limiting the SALT deduction clearly had very little effect on middle income and lower earners. Taxpayers in these deep blue states with high state and local taxes actually benefited more from the Trump tax bill than any other states. This is the exact opposite of the narrative we keep hearing in the media.

Of course, none of these facts are stopping the Democrats from continuing to rail about the Trump tax cuts.

Joe Biden was on the stump this week and said this.

"First thing I'd do is repeal those Trump tax cuts."

I guess Joe is not aware of the facts.

Is he really going to repeal the 25% cut the average H&R Block client got this past year and take an average of $1,200 out of everyone's paycheck?

I thought he was middle class Joe. I have to think if he does that the average taxpayer might figure out rather quickly that Trump really was on their side.

My advice for the Democrats is this. If they truly believe what they say, what are they waiting for ?

Nancy Pelosi and the Democrats control the House of Representatives.

Article 1, Section 7, Clause 1 of the U.S. Constitution states that all bills for raising revenue must start in the House of Representatives.

All Bills for raising Revenue shall originate in the House of Representatives; but the Senate may propose or concur with Amendments as on other Bills.


If it is the worst bill in the history of the United States, why wait? Why not vote on a bill to repeal the Trump tax law right now? There is nothing to stop them. After all, not one Democrat voted for it in the first place. It should not be a difficult vote for them.

What could go wrong?

Could it be that the Democrats might really experience the doom and gloom they were talking about in December, 2017 if they actually have their way?

Can you really believe anything they say?
Posted by BeeLine at 8:23 PM