Being A Smart Patient

Neil Armstrong survived 78 combat missions in the Korean War, was a test pilot for the X-15 and flew to the moon and back as the first man to step on the moon. However, he did not survive a trip to a suburban Cincinnati hospital in 2012 where he had open heart surgery at age 82.


In the aftermath of the 50th anniversary of the moon landing the New York Times and Cincinnati Enquirer reported that Armstrong's family had gotten a $6 million settlement from Mercy Hospital-Fairfield related to the care that Armstrong received in conjunction with that heart surgery.

That cash settlement had been kept under wraps as part of the legal agreement until a whistle blower recently sent supporting documents to the papers. Armstrong's children and grandchildren received the payments after they threatened a lawsuit alleging that the hospital had not met the standard of care in its treatment of the former astronaut and test pilot.

Armstrong's death appears to have resulted when a nurse at the hospital removed epicardial wires protruding from Armstrong's chest while he was in a step down unit after a temporary pacemaker had been inserted to regulate his heart after the bypass surgery. In doing so the pericardium was torn and the cavity sac around the heart starting filling with blood. That blood choked off the function of the heart before the hospital team could correct the problem and Armstrong suffered irreversible brain damage. It was alleged that the problem could have been corrected if a cardiothoracic surgeon and operating room had been on standby.

What I found baffling in the story is why would Neil Armstrong, one of the most famous people on earth, go to a modest suburban community hospital for open heart surgery?

It is particularly bewildering considering that Armstrong, an aeronautical engineer by training, was someone you would expect to be both analytical and meticulous in his preparation in dealing with risky situations.

Sadly, Armstrong was human and he probably did what most of us do when a decision regarding health care in concerned. He took as gospel what his physician told him. He might have also consulted with his family or a few friends. He probably did not seek a second professional opinion. He likely did not consider getting care at any place other than the Cincinnati area where he lived.

When I was in charge of employee benefits for a Fortune 500 company I spent a lot of time looking at our costs as well as the quality of care that our employees received. We were self-insured for the health care costs of our 10,000+ members so both of these issues were critically important to me.

When you study this issue as closely as I did you quickly discover that health care is one area that high quality care almost always produces the lowest cost care. If you receive the right care, at the right time and at the right place you generally are going to have the lowest costs. You will not overpay for care that you don't need and you will not have to pay again if the original treatment does not solve the problem or complications arise.

The problem is that it is very difficult for any of us to assess the quality that we are going to get in any health care situation. We can judge bedside manner much better than the technical skills of our doctor. We choose the local hospital because it is convenient and we want to feel comfortable in our surroundings and close to our family if we have a health issue. However, bedside manner and a convenient hospital should be far down any list when considering medical treatment.

I think there is much to be learned from the Neil Armstrong experience that may be helpful to you or a loved on.

I developed an educational seminar for our employees in 2007 to help them become a "Smart Patient, Smart Consumer" that was based on the book You: The Smart Patient by Mehmet Oz, M.D. and Michael Roizen, M.D. 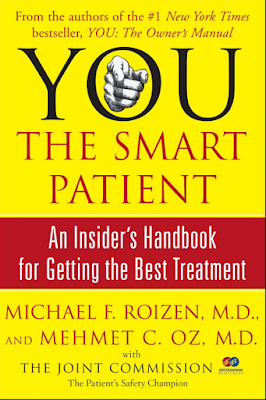 United Healthcare subsequently took the basis of this presentation and made it available to all of their business customers with my permission and that of my company.  You can view that presentation here.

I will summarize a few key points that everyone should keep in mind regarding being a smart patient that I included in that seminar based on the excellent book by Oz and Roizen.  I highly recommend it to everyone.

Why is all of this important?

98,000 people die each year due to medical mistakes.

2 million people contract an infection in the hospital each year.

Of course, Neil Armstrong was just not a number. He was the first man to walk on the moon. However, when he walked into that hospital he was no different than you or me. He was just a man, and he was mortal.

I don't know all the reasons Neil Armstrong decided to undergo his heart bypass surgery at the hospital he chose. However, it seems a curious choice considering what I know.

The news reports suggest that he did not seek a 2nd opinion before he had the surgery. At least one expert witness doctor who was consulted after Armstrong's death suggested that he would not have recommended immediate surgery for the 82 year old Armstrong.

It appears that the hospital and staff were not well staffed and equipped to deal with the complications that ensued.

Arguably the #1 ranked hospital in the world for open heart surgery is just a 4 hour drive away from Cincinnati.

US News ranks The Cleveland Clinic as the #1 hospital for cardiology and heart surgery with an overall score of 100/100. 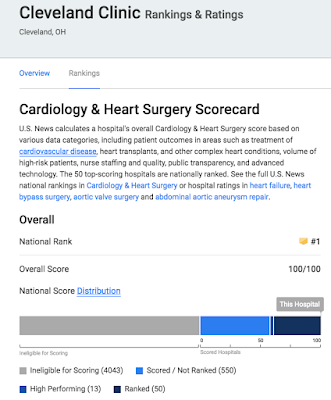 Note that even with the high ranking of the Cleveland Clinic it still has areas that need improvement. That is why the best advice for anyone is to try to live as healthy as you can to avoid having to visit a hospital.

Only 50 hospitals in each specialty are given a numerical rank by US News. Hospitals near the top 50 are listed as high performing. The remainder of the 550 in which a scorecard is done are ranked from poor to excellent.

Here is the heart bypass surgery scorecard for Mercy Hospital-Fairfield from US News which has an overall rating of average. Was average good enough for Neil Armstrong? Would average be good enough for you?

Mercy-Fairfield gets its highest score on the scorecard for the volume of its heart surgeries. It also gets excellent scores based on patient experience. However, it does not come close to the Cleveland Clinic or the 50 other hospitals that are top ranked by US News.

Remember as well that every time a medical intervention (tests, immunizations, prescription drugs, surgery) is undertaken you are taking a risk. That risk is generally worthwhile because it will make you better in the long run. However, you could end up in worse shape because of the intervention.

This is attributed to the fact that elective or non- emergency surgeries do not get done when doctors are on strike and a surprising amount of mortality occurs following these procedures. Death rates actually rise when elective surgeries begin again.

A 90% success rate sounds good. However, what if you are the ONE in 10 that gets the short end of the stick?

That is why you should do everything you can to make sure the odds are stacked in your favor as much as possible when it comes to healthcare.

Neil Armstrong could have had complications from his surgery or his recovery no matter where he was treated. He could have been hit by a bus or fallen down a flight of stairs.

However, it is hard not to say "what if" in this case.

May God bless the man who made that small step and demonstrated so well what mankind was capable of.

Keep his memory alive by also remembering the advice I have offered about being a smart patient and consumer of healthcare.

Good health to you!