July and August have traditionally been the most popular months for Americans to take vacations. The most recent data I could find from Gallup (2002) indicated that a vast majority of Americans mentioned they would take time off in July (51%) or August (35%) for a summer vacation.


However, recent trends show that Americans are actually taking less vacation time today than they did 20 years ago. Vacation days have decreased by about 4 days over that period as this graph from the Harvard Business Review indicates. 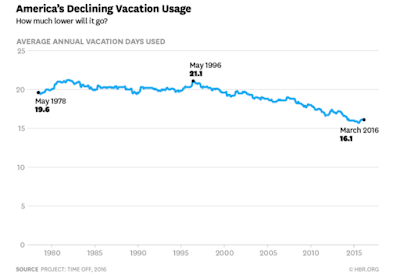 This chart shows the growth of paid time off programs (which combine vacation, sick days and personal days into one allotment). 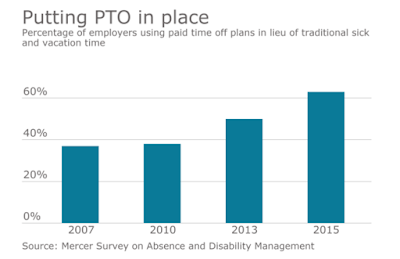 This chart from Indeed.com shows the growth in job postings for positions that offer unlimited time off. This essentially means that you work out your time off schedule with you manager with no set limit on vacation or personal days.

It still is rare but both my son and one of my son-in-laws now have this benefit with their jobs. 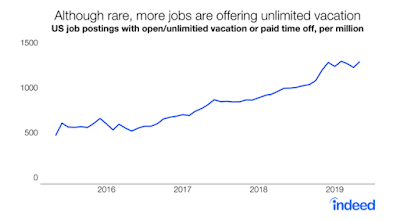 You might think that this policy would lead to more time being taken off but the early data suggests the opposite is true.

As an example, this is a chart showing the distribution of the number of vacation days taken at social media company Buffer in 2016 with its unlimited vacation policy. Note the high number who are taking less than the recommended three weeks the company wants employees to take off. This is not unusual according to data I have seen from other companies.


In fact, even with standard vacation policies, the data generally shows that most Americans do not take full advantage of the paid vacation days they are eligible for each year.

54% of Americans did not use their allotted vacation time in 2016.

Why are people taking less time off? The Harvard Business Review article cited above believes it is directly related to the technology-driven world we live in today. In the plugged-in world we live in it has become increasingly difficult to disconnect from work.

People also fear they are missing out if they are not connected all the time. Therefore, it often seems easier on people to stay on the job and stay connected rather than being partially connected while on vacation. You are always connected the best while you are on the job.

Where are people going on vacation if they really get away and leave the USA?

Mexico wins by a large margin. Nothing else is remotely close.

Here is a list of the top 20 international destinations for American residents. 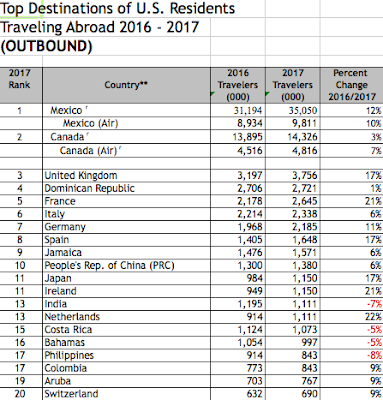 It is estimated that 42% of Americans have a passport according to the State Department.

If you don't think that the stricter international travel rules that have been put in place in the age of terrorism have not had an effect, consider the growth in the number of passports alone.

A lot more Americans are traveling internationally. However, a lot of people are also traveling to the United States.

As this graphic shows, the United States is the #1 travel destination for people around the world based on money spent. $211 billion was generated from 75 million foreign travelers to the States in 2017. 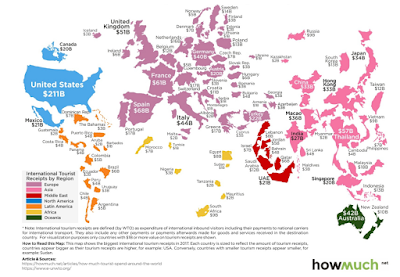 Enjoy your vacation!
Posted by BeeLine at 10:30 PM