They have clearly shown that they have the best women's team in the world.

American Megan Rapinoe was also awarded the Golden Ball as the top player for her spectacular play in the World Cup.

Hats off to the team and Rapinoe for their accomplishments on the field.

However, the antics of Rapinoe when not on the field of play has been nothing short of shameful.

She has consistently made a point about honoring the National Anthem for several years.

Or this quote from Rapinoe before the US team had even played in the final game?

Think for a moment whether you can remember any other national team in a world competition showing the disrespect for their country that we saw exhibited by this Megan Rapinoe led United States team?


I cannot think of any save for the infamous pair of John Carlos and Tommie Smith who I wrote about previously in these pages in a post titled "Dissent is Fine But Don't Diss the Flag".

Interestingly, I wrote that post in September, 2016 when Colin Kaepernick and Megan Rapinoe were first making headlines for not standing for the National Anthem. Notice that was before Donald Trump was elected President. What was Rapinoe's excuse for her actions when Barack Obama was President?

I am old enough to remember the 1968 Olympics when USA track stars Tommie Smith and John Carlos took the podium to receive their gold and bronze medals in the 200m race and raised a gloved black hand and looked down during the playing of the National Anthem. The reason? To protest African-American poverty, to show solidarity within the Black community and to protest global social injustice. 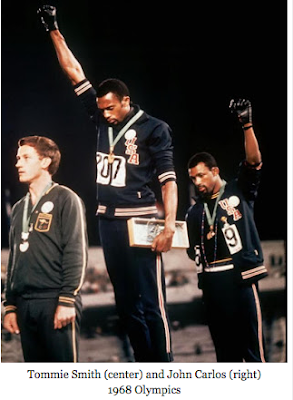 In contrast with Smith and Carlos there was another African-American Olympian by the name of George Foreman who took a totally different approach at the 1968 Summer Olympic Games regarding the American flag.

Foreman won the Heavyweight Boxing Gold Medal at those Olympic Games. After he won the championship bout, in contrast to Smith and Carlos, he walked around the ring waving a small American flag. 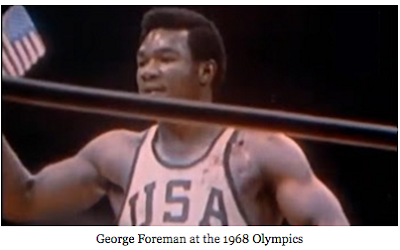 Things did not work out real well for Smith and Carlos over the remainder of their lives. This seems to happen more often than not to those who harbor bitterness and resentment in their lives.

On the other hand, George Foreman went on to become the Heavyweight Champion of the world and a popular corporate speaker. However, his biggest claim to fame is probably the fact that his name is on the famous George Foreman Grill for which it is estimated he has received in excess of $200 million for the use of his name. 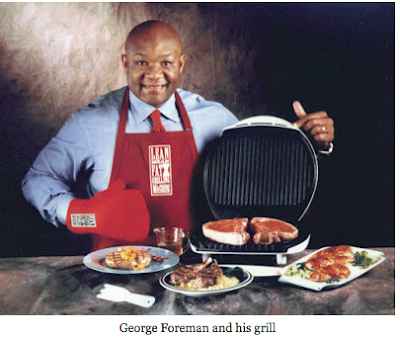 Foreman understood something that Smith, Carlos, Kaepernick and Rapinoe did not. Dissent is fine. Dissing the flag is not.

Why don't you see athletes of other countries doing this kind of stuff?

I think it is pretty clear.

They simply do not have the freedom and independence to do it.

That is what is so ironic about all of this. We have the most privileged of the privileged telling us how bad it is in the United States of America.

Their livelihood (not to mention their very life) could well end with even a hint of political dissent.

What more do you need to know about how shameful the conduct of Megan Rapinoe and any other players on the USA team who follow her example is?

Rapinoe says that she will not visit The White House if invited and claims that every teammate that she has talked to about it specifically will not attend either. 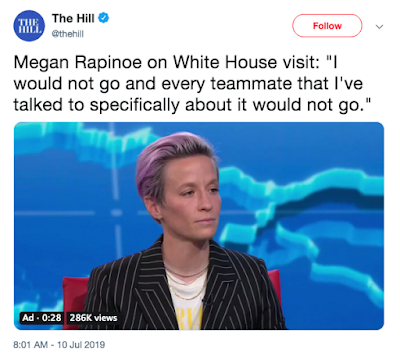 I sincerely hope that Rapinoe reconsiders and decides to visit the The White House. I also hope that the list of teammates who might follow her lead is very short.

The final irony in all of this is that Rapinoe and her teammates have been vocal in stating that they believe they are underpaid by US Soccer.  They undoubtedly would have a strong argument if it was somehow true that other national women's soccer teams are making more than they do. I have not seen anything to suggest that.

The fact is that the men's game is much more popular globally than is the women's game. That translates into more gate revenues, bigger tv revenues and large sponsor packages.

In sports, you need to sell tickets. Or tv rights. Or get revenue from corporate sponsors. Someone has to want to pay to see the athletes perform. Compensation of an athlete is almost always a function of revenue. Ticket price, tv rights and sponsor packages have to support the pay the athletes receive.

Let's look at World Cup revenues between men and women.

The last men's World Cup in soccer brought in $6 billion in revenue.

This year's women's World Cup in soccer is expected to generate $131 million.

Let me do the math for you. The men are bringing in almost 60 times the revenue the women are in their World Cup competition.

The women of the United States team are in a great position  n this country to capitalize on their success compared to the US men's team by gaining large sponsor packages and endorsements. Now would be the perfect time to do that.

However, how many corporate sponsors or endorsers are going to pay big bucks to someone like Megan Rapinoe who wants to trash America?

Nike probably will but the list beyond that has to be pretty small.

Ask Tommie Smith and John Carlos how dissing America worked out for them.

Dissent all you want. Don't diss the flag. Don't disrespect the office of President of the United States.

Megan Rapinoe just doesn't get it. As a result, she will never get what she thinks she deserves.

A very sad tale for someone so spectacular on the field.
Posted by BeeLine at 9:39 PM