There have been few things as heavily anticipated in Washington this year as the testimony of Robert Mueller before Congress.

I guess it could be said that the only thing that was more anticipated this year was the release of the Mueller report.

Before the testimony we heard it was going to be a game changer. Mueller was going to be able to breathe life into the calls of some Democrats to bring impeachment charges against Donald Trump. All of the major networks pre-empted regular coverage to air Mueller's testimony before the House Judiciary and Intelligence Committees.

The Democrats told us that the American public just didn't get it. They had not read the Mueller report and needed Mueller to bring it to life. He was going to deliver great sound bites so that average Americans could understand how Trump was guilty of colluding with Russia and obstructing justice along the way. In effect, they needed to view a "movie" to understand the transgressions of Trump since voters they were not interested in reading the book.

What do we know now?

We know nothing beyond what was in the Mueller report which found that neither Trump nor anyone in the United States of America colluded with Russia in the 2016 election. It was also confirmed once again by Mueller that there was not enough evidence to prove that Trump participated in any obstruction of justice.

We also now know that Robert Mueller was nothing more than a figurehead in the investigation. It appears that he had a very tenuous grasp on the facts of the case and clearly did not have a command of what was in the report that bears his name.

If this was a movie it would be compared to the infamous 1987 film Ishtar that is considered one of the biggest movie flops of all time.

At the hearing, the mention of Fusion GPS seemed to confuse Mueller as if he had never even heard of the group which was responsible for the Steele dossier. Mueller claimed that he never once considered that the political leanings of the prosecutors on his staff might present a conflict (not one was a Republican) or color the investigation. 198 times during the hearings Mueller declined, deflected or said he did not know the answer to a question or stated it was outside the purview of his investigation

All in all, Mueller's testimony appears to have been a total disaster for the Democrats.

The Drudge Report captured the optics of the event perfectly. 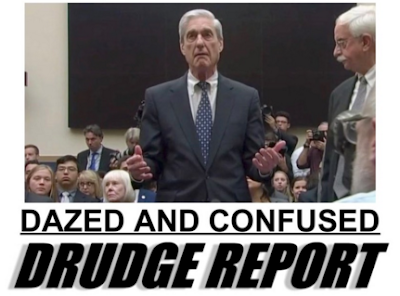 The Democrats also did no favors for the legacy of Robert Mueller. Mueller has had a distinguished career in public service. However, the reality is that he now will most likely be remembered for a dazed and confused appearance before Congress that suggests that he was better suited to chair a senior living community's resident committee than to be in charge of a special counsel investigation.

Where do we go from here?

Many are saying this should end any thoughts that Democrats have of pursuing an impeachment case against the President.

Fact and reality suggest that is correct. However, many Democrats appear unwilling to face reality. Almost half of the Democrats in the House are intent on initiating impeachment proceedings. The notable exception being Speaker Nancy Pelosi.

As I wrote when the Mueller report was released, Special Counsel Mueller's investigation employed 19 lawyers who were supported by a team of 40 FBI agents, intelligence analysts, forensic accountants and other professional staff.

Mueller and his team issued more than 2,800 subpoenas, executed nearly 500 search warrants, obtained more than 230 orders for communication records, made 13 requests for foreign government for evidence, and interviewed 500 witnesses. Interestingly, in Mueller's testimony before Congress he admitted he rarely sat in on any interviews of witnesses.

All in all, the "Mueller investigation" took almost two years at a cost of over $25 million was spent.

After all of that time and effort what was the principal conclusion of the Mueller report? These are the exact words of Attorney General William Barr in summarizing the report.

"The Special Counsel's investigation did not find that the Trump campaign, or anyone associated with it, conspired or coordinated with the Russian government in its efforts to influence the 2016 U.S. Presidential election."


Facing facts and reality, the Democrats should have folded their tent after the Mueller report.

Their pain is now merely compounding as evidenced by the Mueller hearing.

A recent NBC News/WSJ poll done before Mueller's testimony found that only 21% of voters supported initiating impeachment proceedings. It has to be less today.

You also have to wonder why Democrats continue to be so focused on impeachment when we are now barely a year away from the 2020 election? This is particularly true when there is so much Congress could be working on---immigration reform, healthcare, prescription drug prices, infrastructure.

Of course, it needs to be understood that the House is in a box. Working on anything for the good of the country also means that Trump also gets credit. That is something they simply cannot allow to happen leading up to the election.. That means the likely result is nothing will be accomplished in the next year in the House but more Trump bashing in order to try to drive his approval rating down.

At the same time, Mueller's inept performance should give new energy to Trump's defenders in Congress to pursue an investigation of the investigators.

Many Republicans in Congress urged the President and others to give wide berth to Mueller during the special counsel investigation. Mueller was supposedly a true professional with a reputation beyond reproach. He would not be involved with a witch hunt or be a part of any biased investigation. He could be relied on to be thorough and fair.

Mueller's appearance this week seems to show he was nothing more than a figurehead suggesting that confidence was misplaced. As a result, the entire Mueller investigation may have been another example of anti-Trump forces looking for a way to remove a duly elected President. This provides more momentum to get to the bottom of what really led to the "collusion" investigation in the first place.

For me, the fact that so much time and money was spent by those who clearly did not like Trump says more than anything else about the truth of any allegations against Trump. Everyone was lined up against him and they still couldn't come up with anything actionable?

Unfortunately, everything has gone pretty much as I predicted shortly before the 2018 mid-term elections.

This is what I wrote in my blog post, "A Consequential Election" on what I foresaw if the Democrats gained control of Congress. I predicted that we would almost certainly see a Congress only interested in investigating Donald Trump. There would be no interest in doing anything of substance legislatively. I also saw a sharp turn left in the Democrats. Everything I predicted has proven true.

If we think we see chaos in Washington now, think for a second what things will look like with a Democrat Congress.

I can assure you that there will be almost nothing of value done legislatively for the next two years with the Democrats in control.

If Democrats make inroads in November with their radical political agenda it will further embolden them. It will undoubtedly make things even worse than they are today. The political war will continue and intensify. The divide will only get larger. You can count on it.

In addition, there seem to be many Democrats who believe that the 2016 election of Donald Trump was an aberration. It was random and not real. They can't believe that the "progress" made with Obama could possibly be undone so quickly. That is why they want to double down on an agenda that is even more progressive and radical. They cannot believe the mainstream is not with them.

What happens beyond Mueller?

I don't see much changing. Impeachment talk will eventually have to yield to the calendar as a practical matter. However, the investigations and intemperate talk about the President of the United States from the Democrats will continue unabated. They seem to believe they have no other choice.

Nothing will change until the voters make a choice.

That is why 2020 will truly be a consequential election in more ways that we can imagine.

It may result in the end of Trump.

Or it may be the end of the Democrat party as we know it.