I Hope You Enjoyed The 4th of July

I hope you enjoyed the 4th of July.

Based on what is transpiring in this country it may not be too much longer before we don't celebrate the holiday any longer.

There seems to be a determined minority who want to denigrate, diminish and deny America's greatness.

They don't want to celebrate America. They only want to criticize and condemn  it.

To be sure, some of this has to do with the fact that they do not like the current President of the United States.

However, I did not care for the manner in which Barack Obama governed the country but I never doubted America or demeaned it.

What I find most interesting is the selective manner they use to exhibit their outrage.

For example, take the recent decision by Nike to recall new patriotic shoes that were adorned with the so-called Betsy Ross flag. This was the first American flag used during the Revolutionary War.

Nike spokesman Colin Kaepernick reportedly urged Nike to recall the shoes because "he and others consider it an offensive symbol due to its connection to a time when slavery was legal".


If that is the case where was Kaepernick when Barack Obama was inaugurated in 2013 and the Betsy Ross flag was right behind the podium in which he took the oath of office for a second term?


Similarly, there have been many who have criticized the 4th of July parade and festivities that President Trump presided over in Washington, D.C. this year. It seems that they were upset with the military presence, the aircraft flyovers and the tanks on display as evidence of a totalitarian country. I guess it never occurred to them that it might have something to do with simply honoring our freedom and the veterans and military that have made it possible. That sounds like something that should be done on Independence Day.

Does anyone really think we would have our independence and freedom without that military presence and might?

Again, why are these people also not upset with Democrat legends Franklin D. Roosevelt and John F. Kennedy?

Underlying all of this is a troubling narrative that is being promoted by prominent players on the liberal left that calls into question whether it is appropriate to honor and celebrate the United States of America.

New York Gov. Andrew Cuomo said, “America was never that great.” Former Attorney General Eric Holder told us the “notion of greatness” hearkens back to “an American past that never existed.” Democratic presidential candidate Pete Buttigieg is running to lead a nation that he said “was never as great as advertised.”


Of course, who can forget this famous statement by Michelle Obama when her husband gained the Democrat nomination for President in 2008.

"For the first time in my adult life, I am really proud of my country..."


That sentiment seems to be shared by many liberals. The only time they were half-way proud of the country was during the eight years of Obama's presidency. Everything before and after is something that Americans needs to be ashamed of.

The New York Times celebrated Independence Day this year by producing a video that proclaims that it is a myth that America is, or ever was, the greatest nation on earth. The United States is nothing better than merely OK. 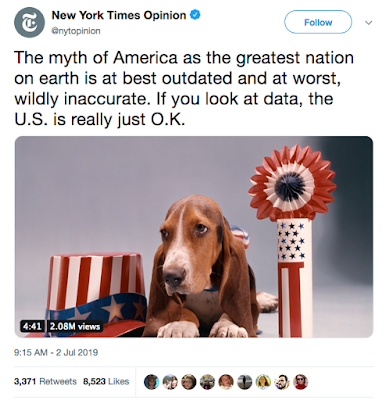 This leads me to ask why then are people literally dying to come here, and why is that those that make these types of statements never leave, if everything about the greatness of America is a myth?

Most troubling is that this negative attitude about the United States is seeping down into the masses. During my lifetime, with the exception of a few years in the Vietnam War era, it would be hard to find many who would say they were not extremely proud to be an American.

That is no longer the case.

Gallup released a survey this week that shows that just 70% of all Americans say they are proud of their country. Only 45% state that they are extremely proud.

Compare the percentages that are  "extremely proud" between Democrats and Republicans.

Here is a breakdown of the answers to that Gallup polling question by different groups.

How proud are you to be an American?

I hope you enjoyed the 4th of July.

Those numbers suggest that this holiday may one day be considered as offensive and odious as those Nike sneakers.