We live in a world that gets more difficult to understand every day.

You may remember all the news headlines about Greece a few years back.

Greece underwent the world's largest government bankruptcy in 2012. It still has one of the world's largest debt burdens--about 180 percent of GDP. The latest reported unemployment rate is 17.6%. The fertility rate is 1.38 raising questions as to where the growth is going to come from in that economy to service all that debt.

Despite all of that, last week saw 10-year government yields in Greece reach lower levels than United States Treasuries.

How does that happen in a sane world? 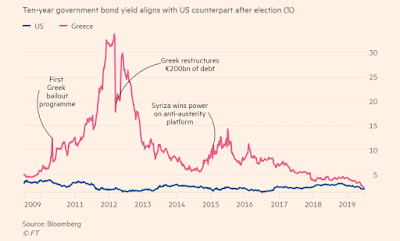 Why is anyone willing to loan money to Greece for 10 years and be willing to only be compensated 2.01% per year for taking that level of risk?

Part of it is explained by looking at 10-year yields in other European countries. Each of these countries has also been in the headlines in the past about significant debt concerns.

How about the yields of 10-years in a few of the bigger economies in Europe?

An "investment" in a 10-year government bond in Denmark, Germany and Switzerland will actually result in you being charged interest rather than earning it!

Yields only turn positive in France at 10 years and Sweden at 9 years. All maturities before that are also producing negative yields.

Even Euro-denominated bonds in some emerging market countries in Europe such as the Czech Republic, Hungary and Poland are now trading at negative yields.

This chart shows the share of government debt that is earning negative yields by country as of June 18, 2019. It is undoubtedly higher today. 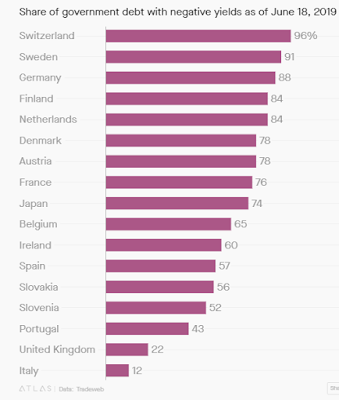 In the United States we have recently set the record for the longest economic expansion in history. The expansion has now continued for 121 months. 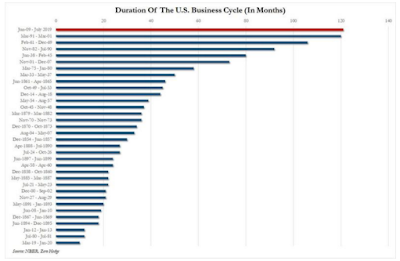 This raises the question as to why the Fed is easing monetary policy and on the verge of cutting rates?

A big part of the reason appears to be the fact that almost everyone else in the world is doing the same. How can the United States be tightening or maintaing the status quo when everyone else is easing? 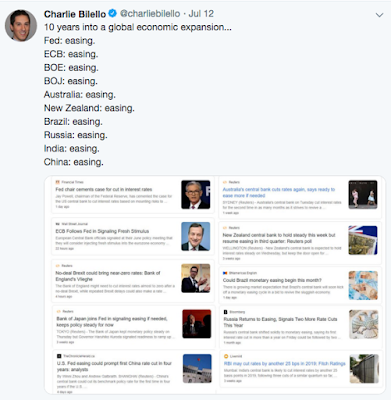 Of course, would any of this be possible if inflation were not so benign throughout most of the world?

Against this backdrop the S&P 500, the Dow and the NASDAQ 100 hit all-time highs last week. 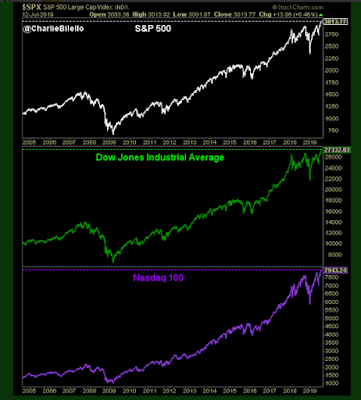 It is hard to imagine it gets much better than this.

Yet we still hear every day from so many how terrible it is too live in the United States?

That is undoubtedly the most difficult thing to understand of all.

One of these days I predict there will be many who will long for the good old days of the Trump administration between 2017-2019.

My biggest fear is that too many people will realize that fact way too late.