In most sports you need to play both good offense and defense to win.

In fact, it is often said while offense wins games, defense wins championships.

The same is true with financial planning.

Most people spend a lot more time thinking about how much money they bring into their household than they do about how that money gets spent.

Most people develop pretty good offensive skills when it comes to money. They figure out how to earn money and make a living. They think a lot about ways to make more.

Far fewer people have good skills at managing and protecting the money once it enters their bank account. Too often it leaves their account almost as soon as it arrives. Most people have a poor idea of how it gets spent.

Do you know where you are spending your money?

Do you know how it compares to others?

I recently came across some interesting data on household spending in the United States that breaks all of this down for average households. 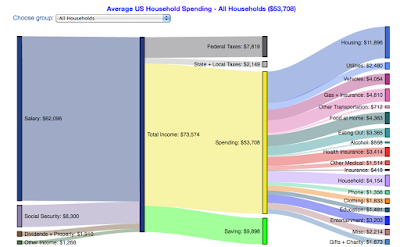 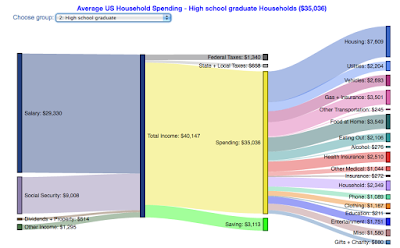 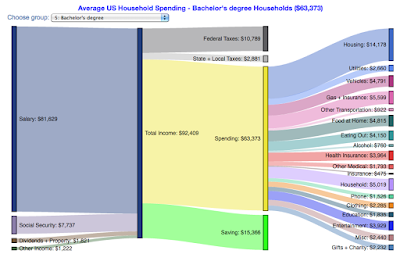 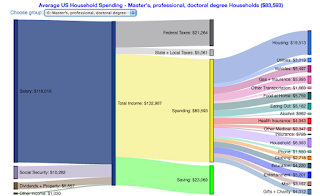 In this data you clearly see how progressive our tax system is.  Those with the highest incomes bear a much higher burden of taxes than lower income groups.

You get a better understanding of both of these principles by looking at the chart I prepared below that breaks down some of the major spending categories comparing those with higher incomes (post-grads) with those with lower incomes (HS grads). 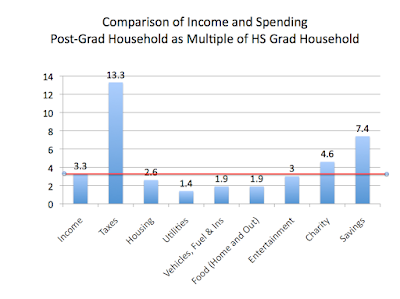 Higher incomes make 3.3x that of those with lower incomes. That higher income also means much higher taxes.

Although income is 3.3x higher, taxes are 13.3x higher for those with post-grad degrees than those with HS degrees. That shows just how progressive our tax system is.

20% of the income earned by the higher incomes goes to taxes. That number is only 5% with the lower incomes.

How do some of the other major spending categories compare?

Higher incomes spend more but the spending does not increase in the same proportions as the increase in income. Even though taxes take a much bigger share of the budgets of these households, spending declines as a percentage of income for most major expense areas.

Outside of housing and entertainment, in which spending more closely tracks the rise in income, in most other categories spending only rises at about 60%-75% of the increase in income.

Part of that decrease is due to the fact that taxes have taken a large bite of higher income budgets before it can be spent. For most people there is also a limit on what they really need to spend today on themselves. Does anyone need 4 cars, 3 house and 100 pairs of shoes? However, if they have the money more power to them. The people who become truly wealthy spend much less than they earn.

You can also see in the chart above that higher incomes only greatly outspend lower incomes when it comes to taxes, charity and savings. What is interesting about this spending is almost all of this inures to the benefit of those in lower income groups. Taxes, charities and capital investment that assists society at large and those with lower incomes in particular.

The chart above also graphically shows how onerous any increase in energy or utility costs would be to lower income individuals. These costs are particularly regressive. If Democrats are supposedly so concerned about those with lower incomes why are they so eager to tax or outlaw lower costs energy sources out of existence?

The same is true with most other living expenses such as housing, food and transportation. Inflation costs in these categories are particularly harmful to those in the middle and lower income groups because it crowds out other spending choices..

Despite what we often hear from liberal politicians the reality is that when the rich are hurt it invariably means that those down the income chain will get hurt even worse. The rich may have to adjust and pull back when things get tough. Their savings may take a hit. They may have to cut back on entertainment, eating out or remodeling their house. However, those actions result in job losses down the chain and big losses in incomes on household budgets that are tight as it is.

Bear in mind as you look at this data that these are all averages.

There are some in lower incomes who are spending little and saving a lot.

There are those with higher incomes who are spending it all (and more) and not saving a dime.

This all does go to show that life is a lot easier if you make more money. You need good offensive money skills.

However, making money is not wealth.

When you have wealth you don't need to make money. Your wealth works for you.

Unless you inherit it, marry it or win the lottery, the only way to accumulate wealth and build net worth is to spend less than earn, save, invest and use compound returns to multiply your money over time.

Think more about how you spend your money. Play good money defense.