In the 1980 Presidential debate (there was only one) between incumbent Jimmy Carter and challenger Ronald Reagan one of the most memorable lines in political history was uttered by Reagan in his closing statement.

"Are you better off than you were four years ago?"

It proved to be a knockout punch on Carter. What was a close election in the polls going into the debate turned into a landslide win for Reagan. That rhetorical question caused a lot of people to reflect on how the four years of the Carter administration had affected themselves personally.

Here is Ronald Reagan delivering that line in the debate.

That has become a fundamental question in Presidential elections in determining whether an incumbent can win re-election.

The most recent RealClearPolitics.com poll average shows that Joe Biden is +9.8 over Trump.

This leads us to the most remarkable poll finding I have seen in this 2020 campaign.

Gallup recently asked the "Are you better off" question as part of a recent poll of registered voters about the 2020 election.

They found that 56% of registered voters stated that they were better off now than than they were four years ago.

Let me remind you that this is in the middle of a pandemic that has disrupted tens of millions of lives in the United States and around the world.

What makes this all the more amazing is that this number is MUCH HIGHER than it was when Ronald Reagan was re-elected in 1984, George W. Bush was in 2004 and Barack Obama was in 2012. Gallup must not have asked the question during the Clinton re-election campaign in 1996.

It is almost 20 points better than what voters said about their personal situation when George H.W. Bush lost to Clinton in 1992 . Bush ended up trailing Clinton by 5.6% in the popular vote that year (43.0%-37.4%) in an election in which 3rd party candidate Ross Perot garnered almost 19% of the vote but earned no electoral votes. 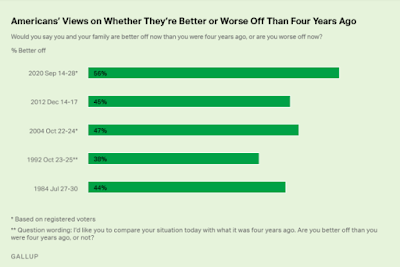 Gallup had another interesting question in that recent survey which asked voters to compare the candidates on "Presidential qualities" and the "Issues."

By a 49%-46% margin voters state they agree with Trump on the issues but by a 49%-44% margin voters favor Biden on personality and leadership qualities.

This is less a surprise but may be telling as to what ultimately will be the most important factor in determining someone's vote when all is said and done.

The obvious question here is how can an incumbent President lose when 56% of voters state they are personally better off than they were four years ago and more voters agree with him on the issues than his opponent?

How can that candidate be down 10 points in the polls?

It would seem to be inexplicable in any logical look at the facts.

Some again will point to the pandemic. However, the polls earlier in the year still showed Biden beating Trump without the pandemic when we had record low unemployment and no restrictions on our freedoms.

Many will point to "the way Trump acts" but I don't discern any different personality in Donald Trump in 2020 than what he displayed in 2016. There has been no "bait and switch". He is the same guy who people voted for (or didn't) the last time.

Some will say that is true but he is now President and should act differently.

I understand the point but this is also a President who has been under a constant assault and attack from the mainstream media and Democrats from the minute he was elected.

For those who state that the President should soften his tone, I ask them do you honestly think that Trump would still be standing today if he had just sat back and let them do this without fighting back? I can assure you he would be long gone by now.

Consider just the negative media that Trump received compared to Biden during June and July according to research by the Media Research Center. That study found that Trump got 150 times more negative coverage than Biden during those two months. 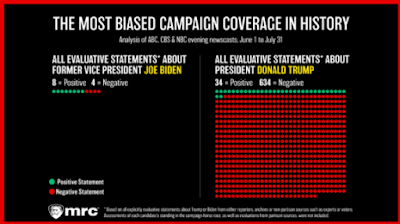 Consider what Trump has had to deal with since he was elected. He was framed with a false Russian collusion story. He was investigated for over two years by a special counsel who found nothing. Trump  then had to go through a totally politically motivated impeachment.

Facts are now also coming to light that Trump was the victim of a stealth coup attempted by those at the highest levels of our country's intelligence and law enforcement agencies. It is especially tragic that facts around this investigation will not be disclosed to the American people until after the election.

If for no other reason, I want to see President Trump re-elected just to find out the results of this investigation because it would seem unlikely it will ever see the light of day if he is defeated.

A long standing legal maxim has been that "Justice delayed is justice denied." Truer words have never been said as it applies to Trump's re-election. What is his redress (or the American people's) if it is later disclosed that he was the victim of a coup attempt to oust him?

The fact is that he will have no redress or relief nor will the American people. The sad truth will also be that the conspirators in the deep state and the swamp in Washington who were responsible for it will be totally in control again.

John Hinderaker of Powerline has been looking at the same Gallup poll on the fundamentals and comparing them to Biden's lead in the RCP polls and asking the same questions I am.

How could there be such a fundamental disconnect between how people feel about their personal situation, and their views on the issues, and how they tell us they are going to vote?

Hinderaker ascribes it primarily to the steady drumbeat of negativism by the media and the Washington swamp about President Trump for four years.

...the Swamp has fought a four-year war of attrition against the president. The Swamp’s major efforts included the years-long Russia hoax and the impeachment farce, but more important than either was the daily dose of negative headlines. And anyone who has consumed popular culture over the past four years has learned that hating the president is de rigueur. The endless assault has taken an inevitable toll, even though the Democrats’ attacks have, on the merits, failed or misfired.

One of Joe Biden’s campaign themes is a “return to normalcy.” He means a return to the days when the Swamp ruled supreme, when politicians like Biden enriched themselves and their families while selling out the interests of the American people. But many voters are so tired of the endless hysteria of the last four years that they are willing to vote for Biden simply to bring it to an end. The howling two-year-old may be about to get its way.

In the end, if President Trump loses the current election, the lesson will be that one man can’t successfully take on the entire establishment. Trump fought the press, the schools, the dominant tech companies, the Chinese and Russians and those who are in their pockets, the anti-Israel lobby, the no-borders interests, the entertainment industry, the public sector unions, the greedy “green” interests, the useless career politicians like Joe Biden. The American people benefited, but it may prove to have been too much. The president’s epitaph might be: Trump fought the Swamp, and the Swamp won.

It is rare that people do not vote in their own self interest. Elections have consequences and the cost is high if your candidate does not win. The cost is even higher if you do not vote with your own self interest in mind because you allowed yourself to be persuaded more by a media narrative than actual facts and taking account of your own personal situation.

I have written before that this is the most consequential election that anyone alive has ever voted in.

People are literally betting their lives, their livelihoods, their liberty and the legacy of this country on the choice they make on November 3.

Does anyone remember the media narrative four years ago?

Trump is going to be a disaster.

The economy is going to be shattered.

The stock market is going to crash.

There is no way he is going to be able to renegotiate NAFTA.

There is no way he can bring back jobs from overseas.

There is no way he is going to be able to get the individual and business tax cuts passed that he is campaigning on.

There is no way he is going to build any type of wall with Mexico,

There is no way he is going to get Mexico to help us stop the flood of illegal immigrants into the country.

There is no way he is going to be able to put tariffs on China.

There is no way he is going to make the United States completely energy independent.

There is no way he is going to reduce carbon emissions if he gets us out of the Paris Climate Accord.

There is no way he is going to be able to defeat ISIS.

There is no way he is going to be able to make our allies pay more for NATO.

There is no way he is going to be able to move the US embassy in Israel to Jerusalem.

There is no way he can walk away from the Iran nuclear deal.

There is no way he is not going to get us into a war in the Middle East or somewhere else.

Do you remember this narrative?

How wrong was it?

Did any of it come true?

Right now about the only way you could find any truth in any of this is due to the effects of the pandemic that came from China.

Was that Trump's fault? Does anyone honestly believe that Joe Biden or anyone else could have managed it any better? The key word here is HONESTLY!

And who was it who warned us from the very beginning to beware of the motivations of China?

I also find it interesting that despite all of the economic disruption caused by the pandemic the actual unemployment rate in the United States today is LOWER than it was when Barack Obama and Joe Biden were taking office in January, 2013 for their second term.

I find that to also be a remarkable fact that you hear little about. 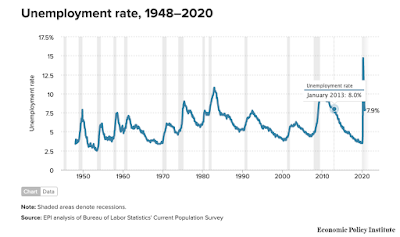 When they ask that question they also better consider who is going to have the energy, drive and resolve to get us through what are clearly going to be some very challenging times over the next four years?

This isn't an 8th grade popularity contest for class President.

This is about people's lives.

Are you willing to bet your life on a media narrative and a 78 year old politician who tells you how much is wrong with the country but who spent 47 years in Washington and did little little to fix anything?

Contrast that with someone who has been there 47 months and been attacked and slandered the entire time but still delivered on almost everything he said he was going to do when he ran four years ago.

Are people really going to let the swamp win?

We will find out in three weeks.

May God help us