How Much Do You Know About Kamala Harris?

How much do you know about Kamala Harris?

It is an important question as there has never been an election in which there was a higher likelihood that the Vice Presidential candidate would eventually become President.

You merely have to look at Joe Biden's age, his past medical history and his diminished mental abilities to understand the probabilities.

Most people had limited exposure to Harris during the Democrat nomination process since she dropped out of the race over a month before the first primary votes were taken due to poor polling numbers and weak financial support.

The Vice Presidential debate Wednesday night will undoubtedly provide many voters with the closest look at Harris they have had.

However, we are only talking about 90 minutes of air time in what will be a carefully staged performance.

What do we really know about Kamala Harris?

The most important thing to know about Harris is that she is undoubtedly the most far-left candidate to ever appear on the ticket of a major political party.

For example, here are the 2019 ideology scores for Senators done by govtrack.us. A score of 1.00 would be a pure conservative on every issue. A score of 0.00 is a pure liberal.

Kamala Harris was judged to be the most liberal member of the United States Senate in 2019 in this ranking.

Here are the scores for those ranked furthest to the left in the Senate in 2019. Marsha Blackburn of Tennessee had the highest conservative score. She was a 1.00 on the scale to Harris' 0.00. 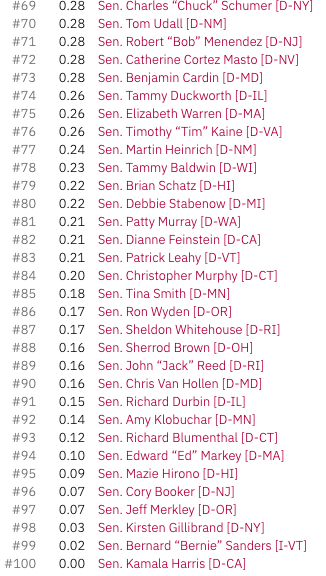 The platform that Harris ran on for President reflects these far-left views.

During her ill-fated Presidential quest she did not have a specific position on the Black Lives Matter movement or calls to defund the police.
Harris has tried to avoid speaking to the issue since she became a VP candidate. However, in June she applauded the LA mayor on on his decision to slash that city's police budget by $150 million.
Harris has also praised the "brilliance" and "impact" of the Black Lives Matter protests deeming them "necessary".
Harris, like Joe Biden, has said almost nothing to condemn the rioting, looting and violence that have plagued large Democrat-run cities such as Seattle, LA, Portland and Chicago over the last several months.
How many of these positions will Harris admit to during the debate? Watch closely.
A big difference between Biden and Harris is that the actions of Biden in this campaign can generally be described as an act. On most issues today, you can find Biden on the opposite side at some point in the past in his 47 years in Washington. Biden was once against gay marriage, he was very pro-police, he was against school busing to achieve integration and he was for building a border wall. Biden even voted for the Iraq war during the Bush administration.
Biden is a pure politician who adjusts his views and values as he thinks he needs to in order get the votes of Democrats and the necessary independents in a general election.
Harris is more of a true believer.
Her father was an economics professor who was known as someone from the "Marxist school of economics."
Here is an article from the Stanford Daily announcing his hiring.
This is a direct excerpt from the newspaper article.
Don Harris, a prominent Marxist Professor, has been offered a full professorship in the Economics Department here, Department Chairman James Rosse confirmed yesterday. Rosse said Harris has not yet accepted the offer, but he "expects to hear from him this week."
Harris who still holds a tenured position at the University of Wisconsin, has served as a visiting Professor here, and is currently teaching at the University of the West Indies in Kingston, Jamaica.
The appointment is the direct result of student pressure in recent years to hire more faculty who favor an "alternative approach" to economics, said Economics Prof. John Gurley, who now teaches the only undergraduate course in Marxist economics.
Gurley said the appointment of Harris was the culmination of the six-month "round-the-world" search for the most qualified Marxist professor available.
I have found that most of those with far-left views can be traced to something in their upbringing.
However, Harris is also a politician and very much a political opportunist who is very much driven by ambition.
As the campaign and Democrat debates progressed it was clear that not many people were buying what Harris was selling.
I saw early on that the biggest problem that Harris had in the debates was that she just seemed very unlikeable.
At one point in the debates she tried to resurrect her fortunes by essentially calling Joe Biden a racist.

In a later debate Tulsi Gabbard effectively ended any hopes that Harris had by pointing out some of the questionable things she did as Attorney General of California.
In addition to calling Biden a racist, Kamala Harris was one of the few Democrats to come out and say that she believed the women who have accused Joe Biden of inappropriate conduct.

It makes you wonder why Kamala Harris would want to have anything to do with a man she has essentially called a racist and a pervert, doesn't it?
This is at the core of probably the most common criticism that I have heard about Harris.
She is said to be an opportunist that will do most anything to further her ambitions. Those allegations date back to the 1990's when the 30-year Harris was the girlfriend of the 60-year old Speaker of the California House, Willie Brown. Brown appointed Harris to two high-paying patronage positions while they were dating. 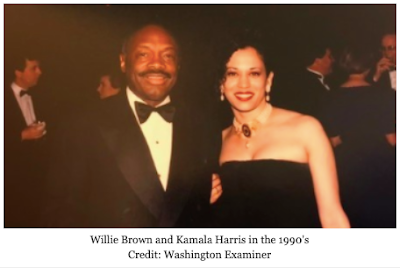 The relationship with Brown and the the appointments helped to launch the political career of Harris in which she was elected District Attorney for San Francisco in 2003 and later California's Attorney General before running for the U.S. Senate in 2016.
The "opportunist" label was also fed by how Harris seemed to shift positions on a number of issues while she was running.
This is what Politico says about Harris and her shifting positions.

Harris’ shifting positions on key policy matters undermined her short-lived run for the presidency. A former California attorney general and district attorney, Harris faced criticism over a prosecutorial record that doesn’t always match with the progressive positions she espouses today. On health care, her waffling on “Medicare for All” during the presidential primary revealed a candidate torn between appealing to progressives demanding structural change and moderates favoring incrementalism — and satisfying none in the process.

Kamala Harris did not marry until 2014 when she was 50 years of age. She has no children of her own but her husband, Douglas Emhoff, has two children from a previous marriage. The children were late in their high school and college years when they married.
I find it interesting that suburban soccer moms are supposedly so taken with Democrats like Kamala Harris and Supreme Court justices like Elena Kagan and Sonia Sotamayor. These suburban women seem to trust these liberal women about the policy choices for their country, for them individually and for their children.
However, none of these three liberal icons has ever had their own children. There is nothing wrong with that choice, and for some that choice is denied them, but as anyone who has ever had children understands, the experience changes you. It forces you to be more humble. It forces you to look at things differently. It forces you to look beyond yourself. It forces you to look at the world and the future differently.
I was struck during the Amy Coney Barrett announcement that Barrett, if confirmed, would be the only mother of school-age children to ever serve on the Supreme Court. Barrett is the mother of seven children which includes one special needs child and two children adopted from Haiti.
If anyone has a good perspective of the challenges of motherhood and raising children in today's world it would seem to be Amy Coney Barrett.
I urge you to watch the Vice Presidential debate but put the things that Kamala Harris says in context at that debate and compare them with her past record.
Do the same when Amy Coney Barrett begins her confirmation hearings. Kamala Harris is on the Senate Judiciary Committee and will be questioning her. Judge both women against what you know about their backgrounds.
How much do you know about Kamala Harris?
You should know more after reading this blog post.
You should know even more after Wednesday's debate.
Carefully consider all of it as one of the biggest decisions you will ever have to make looms large four weeks away.
Even the Biden campaign's recent advertising is signaling who the real candidate is.
When have you ever seen this? 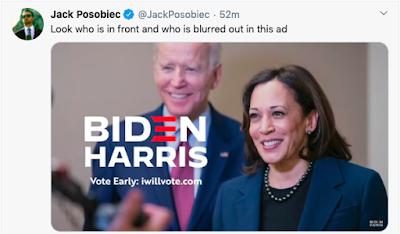 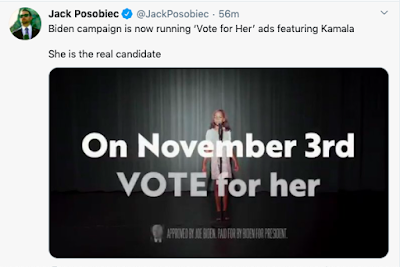 Think about it.
Posted by BeeLine at 9:24 PM