The "What If" Election

As if 2020 could not get any crazier we now have Covid-19 directly impacting the President.

What does it mean and how will it affect the Presidential race that will end (hopefully) four weeks from now.

At the end of July I wrote that it was impossible to predict who would win the election because 2020 was proving to be such a chaotic year and there were still 100 days to go before election day.

I think it is almost impossible to predict what is going to happen in November considering what is going on in the country right now.

The pace of events is overwhelming. In fact, it would not surprise me if we have yet to see what historians will later point to as the most consequential issue in this election.

Here are some examples that are not too far-fetched.

Joe Biden or Donald Trump comes down with Covid-19 or another health issue.

It is still impossible to predict what is going to happen 30 days out. I continue to believe we have yet to see the most consequential event or issue in this election unfold.

How do I see the Covid-19 diagnosis of President Trump impacting the race?

That is also impossible to predict.

This tweet sums it up better than I can and this guy does a lot of work with polling models.

What are some of the "what ifs" that make it imponderable?

What if President Trump makes a quick recovery and is able to debate on October 15?

What if President Trump recovers and is able to debate on October 15th but Joe Biden refuses to do so?

What if President Trump recovers and Joe Biden then contracts the virus?

What if Biden (due to being even older than Trump) has a tougher time battling the virus after Trump has recovered?

What if Biden is in the hospital at the time of the election?

What if the President's condition worsens and he ends up in the ICU just as occurred with Prime Minister Boris Johnson of the UK?

What if this occurs and there are calls to invoke the 25th Amendment that would result in VP Pence assuming the duties of President while President Trump is considered incapacitated?

This is just a small sample of endless exploding "what ifs" that give rise to so many imponderables that make it impossible to predict how this all ends up.

We also have another set of "what ifs" relating to the upcoming confirmation hearings and Senate vote on Amy Coney Barrett to the Supreme Court.

Three Republican senators have recently been diagnosed with Covid-19 (Mike Lee-UT, Thom Tillis-NC, Ron Johnson-WI). As a result, Senate Majority Leader Mitch McConnell has announced the full Senate will not conduct any business until the week of October 19. However, the hearings on Barrett are still scheduled to begin the week of October 12.

However, what if Senate Majority Leader Mitch McConnell tested positive?

What if Senate Judiciary Committed Chairman Lindsay Graham did?

The Democrats are already saying that the positive cases in the Senate should cause the confirmation process to be delayed until after the election. What if there are additional cases?

What if there are no more Senate cases but President Trump remains hospitalized and the confirmation process moves forward? Will the Democrats feel as if they can be aggressive in attacking his nominee under those circumstances? How will that be looked on by the voters?

How will voters respond to some of the nasty things that Democrats have already said about the President? What if that starts to backfire on them?

This is an example. This is the former national spokeswoman for Hillary Clinton. She also used to be a staffer for President Obama. 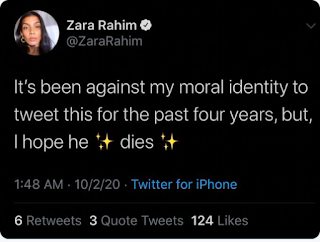 There are plenty of other examples about venom coming out in the tweets of leftists about the President and First Lady.

Of course, some of the people who are saying this stuff also have these signs up at their home. 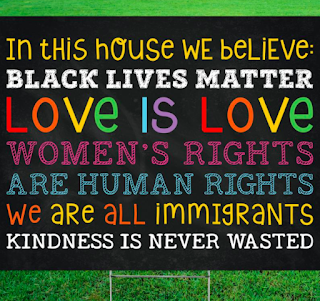 We live in a strange country right now.

There are just so many "what ifs" in play.

The biggest question underlying on all of this is what is the prognosis of President Trump in dealing with the virus?

This is the best graphic I have seen on the different paths that we see with those infected with Covid-19. 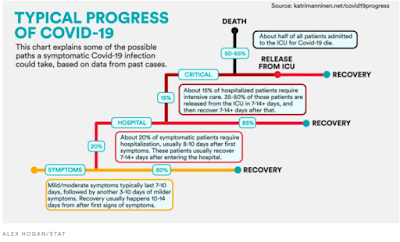 The next 5-7 days should tell us a lot about what path President Trump is on.

President Trump's age of 74 indicates that there is more risk to him than to the First Lady who is 50.

This is clearly one reason why President Trump has been hospitalized in an "abundance of caution" and Melania is still back at The White House.

You can clearly see the risk profile in the latest infection fatality rates (IFR) from the CDC.

Of course, those age 70+ rates are skewed upwards by those over age 80, those with multiple comorbidities and those in nursing homes.

We are also talking about the President of the United States who has a full-time physician whose principal job is to care for the commander in chief.

Yes, Donald Trump is the President of the United States, which may have dictated more caution in hospitalizing him this early. However, when I first heard he was being transferred to Walter Reed I believed that Trump had to also be exhibiting some worrisome symptoms that were concerning for that step to be taken

Donald Trump is not one who likes to exhibit weakness of any kind. He would not have agreed to go the the hospital unless there was a good reason.

The fact that doctors were so quick to use the experimental drugs Regeneron and Remdisivir also suggested more than normal concern. He is also reported to be taking " zinc, Vitamin D, famotidine, melatonin and a daily aspirin" according to White House doctor Sean Conley.

That there was more concern about his condition on Friday now seems to have been confirmed today by the doctors attending to the President.

I also found it interesting that President Trump has not been given hydroxychloroquine after all that Trump said about it earlier in the pandemic. Is this because he already took it as a prophylactic earlier and it was determined to not be effective for him? Or is there some other reason?

For example, as I have written before, all of the vaccine work and the use of therapeutic drugs such as Regeneron and Remdisivir can only be used under the "emergency use authorization" exception to the Federal Food, Drug and Cosmetic Act "when there are no adequate, approved, and available alternatives".

If 74-year old President Trump quickly recovered by only taking HCQ, zine and an Z-pac would that not make it difficult to argue that there were "no adequate, approved and available alternatives" available?

It is difficult to imagine that the President did not ask about the use of HCQ for his treatment considering his earlier statements about it. You have to know that he would have liked to confound his critics. However, it is also not hard to see that he was also told what that might do to the fast-paced vaccine development plan that Trump has been pushing so hard for.

Right now I believe all of this plays to Biden's advantage.

The biggest benefit to Biden is that he can continue to stay in his basement and off of the campaign trail. Voters will not see the marked contrast between Trump's enthusiastic rallies and the almost nonexistent Biden campaign.

Here is a "Biden rally" hosted by Bernie Sanders in New Hampshire yesterday. 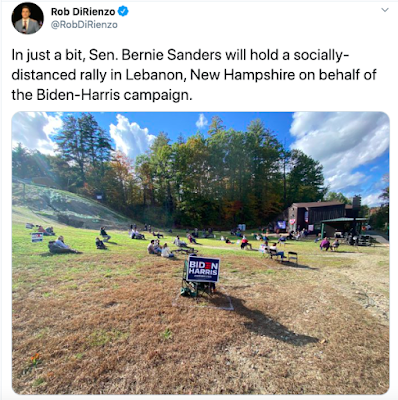 I still have not figured out why the Biden campaign sent Jill Biden to Nebraska for this event while Biden was in his basement. Nebraska allocates its electoral votes by congressional district. Trump won this district and the one electoral vote by 2% in 2016. Why Nebraska and not Florida, Arizona, Pennsylvania, Michigan, Wisconsin, North Carolina or Ohio? 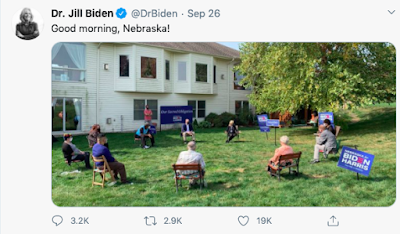 On the other hand, this is a crowd that gathered outside Walter Reed Hospital yesterday to support President Trump. This is in Bethesda, MD which is not exactly "Trump country". Hillary Clinton got 76% of the vote in Montgomery County which Bethesda is a part of.

The fact that Trump cannot campaign allows Biden to avoid that comparison and it also means that he will not have to have campaign and stand up in media events where he risks making mistakes and gaffes.

For example, here is Biden in Grand Rapids, Michigan on Friday where he is essentially addressing an empty parking lot. 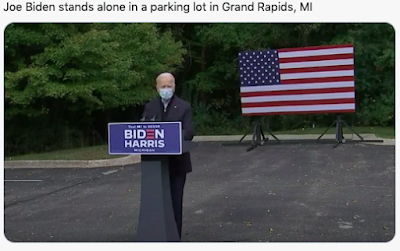 You have to also ask if the American people will accept this from their President?

Since we hear from many that the threat of Covid-19 is not going away soon are we to expect a President Biden to spend most of his time hunkered down in the White House because he is fearful of catching the virus?

If he is unwilling to take much risk to be President why would he take any risks if he is President?

It may start occurring to people that if Trump pulls through this we will have a President who will have had the virus, has antibodies and is presumably immune. There will be nothing to prevent Trump from fully discharging his duties. Can the same be said about Biden?

That is another "what if" in all of this which I can see developing as a narrative over the last weeks of the campaign if Trump pulls through with no lingering effects from the virus.

The 2020 election has become the "what if" election.

If anyone tells you they can predict the outcome right now just walk the other way.

There is simply no way they can have any idea with so many "what ifs" in play.