Covid and the Election

The 2020 election will be forever linked with the 2020 pandemic when the history books are written.

One of the key themes will be the extent to which a virus became so politicized. It is quite remarkable.

This Gallup survey speaks volumes about the political divide that has defined Covid. 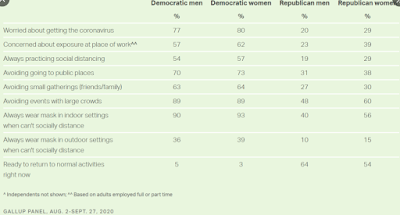 80% of Democrat women are worried about getting Covid compared to 29% of Republican women?

64% of Republican men are ready to return to normal activities compared to 5% of Democrat men?

There is a reason that Donald Trump gets thousands and thousands to his political rallies and Joe Biden is speaking to rows of cars.


You also see the political divide regarding Covid in this survey from Pew Research.

82% of Biden supporters say that Covid is very important to their vote compared to only 24% of Trump supporters. 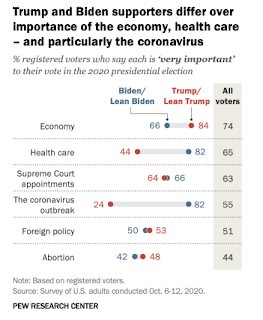 We also see the effect of Covid in the heavy early voting we are seeing across the country. This appears to be driven in part by fears of potentially catching the virus while voting in person at one's local precinct.

However, what I find interesting is that are far fewer early voting sites across the country than precincts. In most cases people who vote early are actually exposing themselves to larger crowds by voting early.  They are also being exposed to people from a larger geographic reach than if they voted at their local precinct on election day. For example, in Ohio where I live  there is only one early voting site in each county.

I am not sure that will occur if Biden wins.

One thing you have to understand is that politicians say and do the things they do because of what they believe the people who vote for them want.

There is a reason that Joe Biden was once for strict criminal justice rules, against gay marriage, against school busing to integrate schools, was for a border wall and questioned Roe v. Wade. That is where he once believed he needed to be for the votes of his base.

Look at the poll results above and tell me what positions Joe Biden is going to take on Covid if elected?

Biden is heavily invested in Covid panic because his supporters are deeply concerned about it. Some are frozen with fear over it. Look at the survey above.

There will be more masks and more lockdowns because that is what his voters want. Biden would not try to work through it. He is simply not going to buck his base.

Joe Biden says he will follow "the science". That is not correct. He will follow what he thinks his base of voters wants. "The science" is merely an excuse.

After all, what is "the science" anyway?

Under Biden you are not going to see a big push to reopen the schools. The teachers unions in many places simply do not want to open.

For example, in Fairfax Country, Virginia the teachers are already demanding that schools not reopen for in-person classes until August, 2021.

Do you think Joe Biden would try to do anything to counter this?

Seeing this I was interested to look into what the experience of the schools in my area have had with Covid since they reopened. I have seen buses running through my neighborhood since the middle of August but with all of my children no longer in school I had not heard much about how things were going.

Of course, we have all heard the controversy about schools and all of the fear mongering that has accompanied it. We were told that schools would be breeding grounds for infection in the community. We were even told that even if the children did not get very sick it was extremely dangerous for staff.

What is happening near me?

The Sycamore Community School District in suburban Cincinnati has been open since August. Students can elect either in person schooling or virtual classes.

64% of the students have elected classroom instruction in a district that has almost 5,500 students.

In two months they have had 23 confirmed cases of Covid among students, faculty and staff.

Let's put that in context. On an average day, 5% of the students in a school district like Sycamore pre-Covid were absent for illness or other reasons. That would be over 250 per day. Compare that to 23 cases of Covid over 2 months.

The district states that not one of the 23 cases has been traced to an infection received at school.

In the high school , which has students participating in football, soccer and other activities, there have been 3 cases in two months. The only new case this week (one of the three total cases they have had in two months) was actually a student in virtual learning.

70% of all high school students are in the classroom.

This is common all over the United States where schools have opened. What more does one need to see? Schools are simply not the source of Covid infections we were told they would be.

Why is this not considered "science"?

Over the weekend I also saw some interesting data out of Sweden.

It seems that Sweden ( the country who supposedly did not follow "the science") in September had the fewest per capita deaths for any month in its history.

The lowest number before this was June, 2019 before the pandemic.

How is it that in what is supposed to be one of the greatest pandemics in world history that Sweden can have the fewest per capita deaths in any month in 160 years?

This is also at a time that most of the rest of Europe is starting to lockdown harder due to a surge of cases across continental Europe.

Sweden never locked down, never mandated masks, never closed their schools, restaurants or bars, and had about 95% fewer deaths than experts predicted.

Where is Sweden on the chart of new daily cases?

Where is the United States compared to these other large European countries that Democrats tell us are following "the science"?

Look at the chart below. 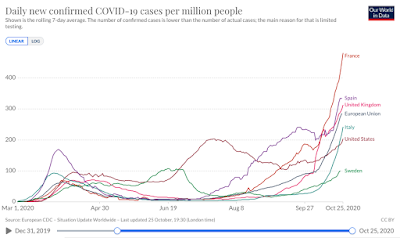 You are hearing a lot of the media talking about all of the new cases in the United States right now.

Are you aware of how the numbers in the USA compare to Europe?

Is it also President Trump's fault on what is going on in Europe right now?

Where is "the science" in all of this?

Perhaps the answer to what we are seeing is told in this study from Japan that I also saw over the weekend.

This study tested and observed 1,600 healthy individuals at a large Japanese company with 11 work locations in Tokyo.

The study involved giving employees serology tests between May and August to determine if they would test positive for seroprevalence to the Covid-19 virus by exhibiting antibodies.

At the beginning of testing only 5.8% tested positive in May indicating that few had been exposed.

By August, 46.8% of individuals tested positive.

This is the the actual summary conclusion of the study.

Conclusions and Relevance: COVID-19 infection may have spread widely across the general population of Tokyo despite the very low fatality rate. Given the temporal correlation between the rise in seropositivity and the decrease in reported COVID-19 cases that occurred without a shut-down, herd immunity may be implicated. Sequential testing for serological response against COVID-19 is useful for understanding the dynamics of COVID-19 infection at the population-level.

In other words, the virus appears to have spread widely and quickly within the Japanese population but had little effect on the death rate as so many people were asymptomatic. As a result, this may mean that substantial herd immunity may be present in Japan.

This might be the same effect that has occurred in Sweden.

Perhaps lockdowns and mandatory masks are not the answer.

By doing all we can do to suppress the virus are we possibly just making matters worse in the long term? Are we slowing the spread but also spreading this entire pandemic out much longer than it needs to be with even more resulting economic and societal harm?

The coming election may well determine whether we are willing to move past the pandemic panic and be willing to live again or whether we will truly live in the "dark winter" that Joe Biden talks about.

There truly are two very different paths that we might follow after this election. The choice could not be more stark involving Covid and the election.

It will not be "the science" that determines our path. It will be politics and the election that puts us on that path.

Consider some of the facts above.

"The science" is far less than clear.